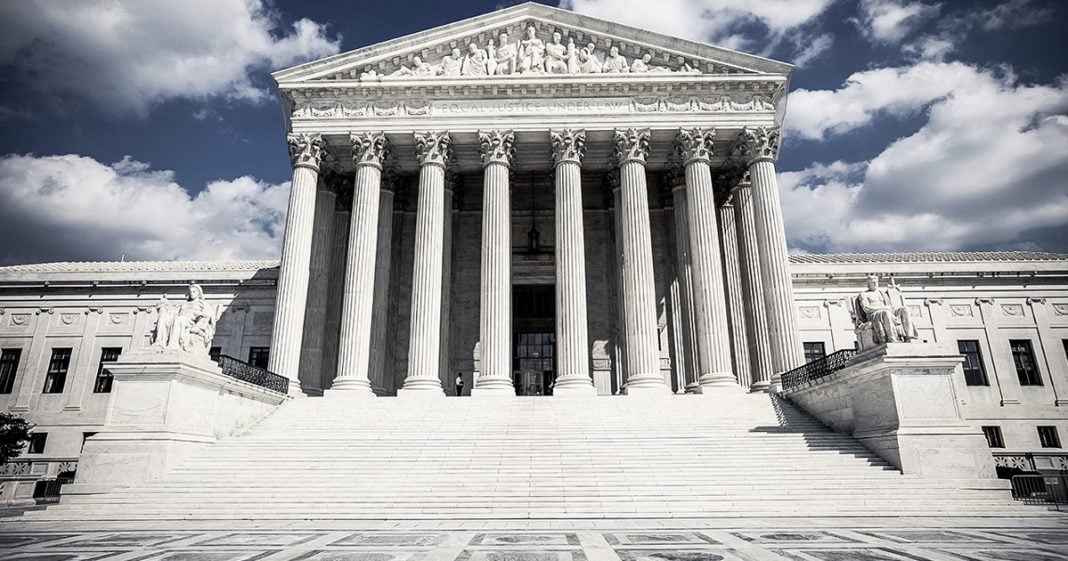 A recent op-ed in the New York Times called for the end to Supreme Court term limits. Not only are term limits for the Supreme Court a great idea, but that idea needs to extend to every single seat on a court in this country. No person should be able to sit on a judicial bench for their entire lives with little remedy to remove the pro-corporate, anti-consumer hacks that make up most of our judiciary today. Ring of Fire’s Farron Cousins discusses this.

There was a really good op-ed in The New York Times earlier this week that talked about the need for term limits on the US Supreme Court. Now that is an idea that I 100% agree with. There should not be one high court in this country where you get appointed to at, I don’t know, age 55 and then you get to sit on it for possibly 35, 40 more years depending on your personal health. There is nothing fair, there is nothing just about the current system we have in place where it comes to picking justices.

But I want to go further. I don’t think we just need term limits for the US Supreme Court. We need term limits for every single court in this country. See, as Mike Papantonio here of Ring of Fire always says, the Supreme Court is just a shiny thing. That’s the one they bring out and dangle in front of you before elections or whenever there’s a new nominee, it dominates the headlines, and in Kavanaugh’s case rightfully so by the way.

But nonetheless, while you’re distracted by that Supreme Court, they’re packing all of the lower courts where most of the cases will finally be decided, they won’t even make it to the Supreme Court, but they’re packing those with corporate hacks, corporate hacks who are going to take away your rights, take away your protections, take away anything good that might make your life better or safer, and give everything they can to corporations. And those judges too, sit for the rest of their lives on those benches until they decide to retire. Yeah, there are mechanisms for getting rid of these people, there is an impeachment process. But guess what folks? The impeachment process to get rid of a sitting judge is actually a lot more difficult than getting rid of a sitting president.

Coming up with a valid impeachment against a sitting justice is damn near impossible, and that’s why you don’t see it happening very often in this country. All the judge actually has to do is not go commit a crime, meanwhile they can sit there, rule for corporations all day, attend their fundraisers, hobnob with them, get special treatment from them, and that’s not an impeachable offense. Should be, but it’s not. The only remedy we could possibly have at this point would be to put term limits on these people.

Donald Trump has nominated 50 and actually had 50 approved so far this year, 50 lower court federal judges who will sit on those benches for the rest of their lives, 50. And Donald Trump got to pick them. And that’s nothing compared to what he did last year. He’s got 126 waiting in the wings ready to go. By the time this man leaves office, he may have already packed 200 new corporate justices for lifetime appointments on lower court benches while everybody’s arguing about a Supreme Court seat. And yeah, Kavanaugh is unfit. The sexual assault allegations alone should have disqualified him, but we know republicans aren’t going to do that.

But that’s one seat. That’s one seat on a court that hears fewer cases than any other court in this country. And yeah, nobody can overrule them, but considering the fact that most of the laws are actually upheld or denied in the lower courts, that’s where the real decisions are made, that’s where the real damage is done, and that’s where republicans have focused most of their attention. And that is the number one reason why we have to put term limits on these people so that they can not only screw up this generation but the generation after it, and in some extreme cases the generation that comes after that one as well. That’s how much power these people have when they know that they can’t be removed from the bench.

Term limits is the only viable solution to get some of these pro-corporate anti-consumer hacks off the bench, back into private life, where we might be able to replace them with somebody who understands that people are just as important as corporations.