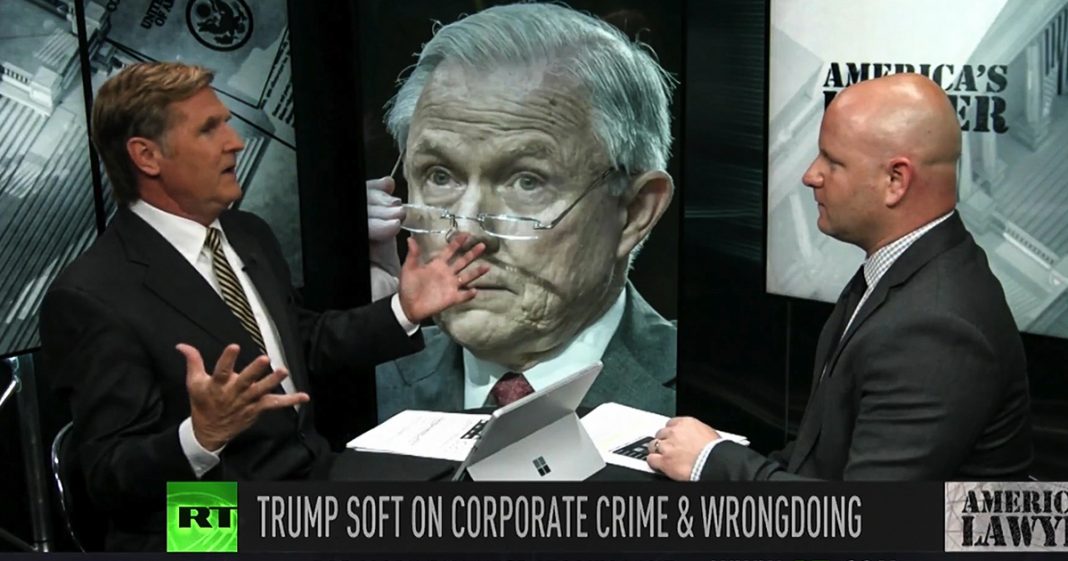 Via America’s Lawyer: Mike Papantonio and Trial Magazine Executive Editor Farron Cousins discuss how under the Trump Administration the U.S. government has been massively underinvesting in enforcement and prosecution of white-collar crime.

Mike Papantonio: White collar criminals had it pretty good in this country for the last few decades with little to no prosecutions. A few paltry fines for some of the worst environmental financial crimes possible and very little oversight. But new data tells us that things for corrupt CEOs and corporations are better than ever with white collar punishment hitting a new low in this country. Joining me to talk about this and other big stories this week is Farron Cousins, editor of the National Trial Lawyer Magazine.

No surprises here. I mean I saw this. This is about everything we expected, we knew that Trump, his whole agenda, was to deregulate. And one way you deregulate is to let white collar thugs get away with white collar crimes while you go after the people, the have nots. That’s what this Administration … If immigration … we’re going to prosecute you … street crime, we’re going to prosecute you big time, but a man with a briefcase can steal millions of dollars more than a man with a gun these days and that’s what’s happened here, isn’t it?

Farron Cousins: Is it and to be honest you could have replaced Donald Trump’s name there with any of the other people who had also run for president as a republican. This is what happens. And they’re very clear about it, they let us know and they let these major corporations know … you vote for me, you give me money to my campaign, I’m going to make sure we take it a little bit easier on you. I know Obama … I mean, this is what they say, he was tough on you, we’re going to make it easy. Obama was not tough on them, to be honest the biggest shocker of this story was the amount of fines that actually were imposed during those years. I never even thought it was that high but again, nothing but fines.

Mike Papantonio: Here’s the deal, here’s the deal. So Eric Holder, as AG, we want to say well, Eric Holder did a better job. No, he really didn’t do a better job. We had Obama come out, he was going to be the president that changed all this, he was going to change our culture by putting white collar bottom feeding thugs on Wall Street in prison for stealing $3 trillion dollars from our economy after the economic burn down. And you remember him running … I was actually a commentator on a show where they showed him giving a speech and asked for my comment. I was delighted. I said, well it’s time for a president to finally throw some thugs in prison. You know how many were thrown in prison? Zero. Zero. But then, you know, the comparison here is that Eric Holder fined people more, yeah, it was inconsequential fines, but at least he fined somebody.

Here, just the opposite is happening. I mean the numbers we’ll put up on the screen and show you. The EPA down 94% on violations that the Sessions’ Administration has identified. DOJ down 90%. FCC down 85%. Goes on and on. What’s your take?

Farron Cousins: I mean look, the EPA is especially troubling at this point because yes, we’ve got these horrible bankers out there, we’ve got the horrible people with the FCC, but these environmental crimes that are not being punished, these are things that you feel the effects of for generations. Right. I mean we’ve got this massive coal ash pond in North Carolina right now that has absolutely flooded, broken through. You’ve got coal ash that’s about to seep down into the aquifer. That’s going to poison people for decades.

Mike Papantonio: This story bothered me a little bit because there were no comparisons between what’s happening now and what happened under Obama. They identify that the DOJ failed to prosecute banks for none other than laundering money for terrorists. Well, what did we see with the Obama Administration? They paid a billion dollars, HSBC paid a billion dollar plus fine where they actually had a document where they admitted item by item, it was a two page document, where they admitted yes, we broke this law, even concluding that it may have cost American lives. So they go through this litany of all the crimes that they had violated and said oh, well we’re sorry, we’ll pay a billion dollars … the numbers that were calculated were well in excess of $120 billion dollars that this same bank made by the same kind of conduct.

Farron Cousins: Well what’s also disgusting out of this story is that we’re finding out now that people who report these corporations for fraud and abuse against the government, they’re actually not even finding them as often anymore. They’re cracking down on these whistle blowers who come forward and say hey, this big bank is ripping off the government, this contractor is providing you with shoddy service or products when you’re paying them billions of dollars. They’re taking the side of the corporation who’s ripping them off instead of the whistle blower now.