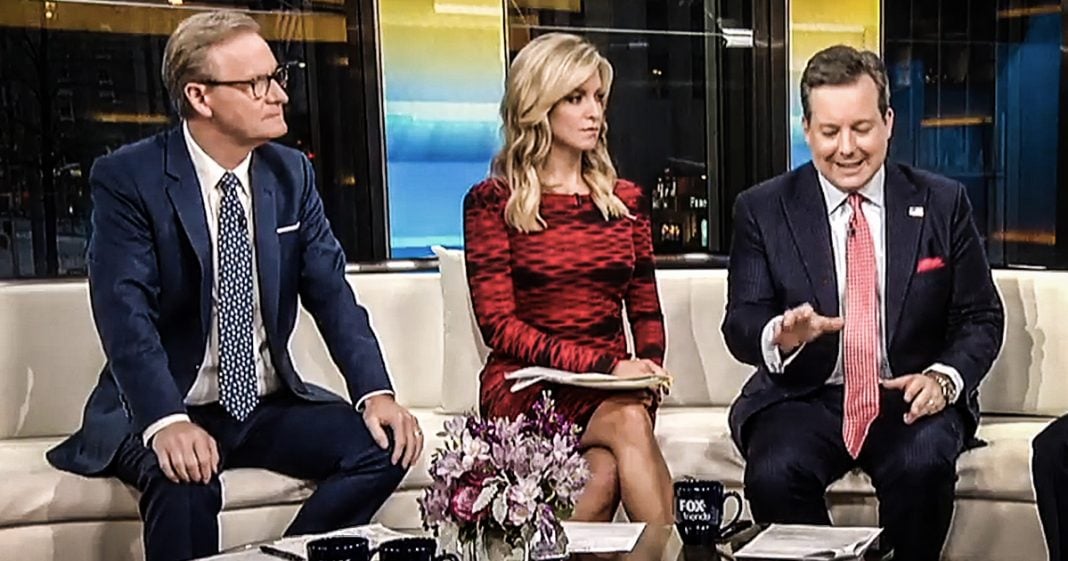 According to conservative lawyer and former Antonin Scalia law clerk Ed Whelan, it was actually a fellow classmate of Brett Kavanaugh’s that perpetrated the sexual assault against Dr. Christine Blasey Ford. Whelan attempted to back up his claim by using the real estate site Zillow in an argument that was easily picked apart. But that didn’t stop Fox News from pushing the conspiracy theory, and its likely to stick given how desperate Republicans are to protect Kavanaugh. Ring of Fire’s Farron Cousins discusses this.

Republicans this week have been trying to launch several different conspiracy theories to discredit Brett Kavanaugh’s accuser, Christine Ford. After their first conspiracy theory about Ford being upset with Kavanaugh’s mother turned out to be completely false, they moved on to Ford’s brother worked for the law firm that worked for Fusion GPS, which also turned out to not be true. So now, a conservative lawyer by the name of Ed Whelan, has come out with the latest conspiracy theory about Christine Ford’s accusations against Brett Kavanaugh. And that is, that maybe the sexual assault took place, but if it did, it was most likely Kavanaugh’s doppelganger. Because as it turns out, there’s a guy that went to school with Kavanaugh, that happens to have a similar appearance. If it did happen, according to Whelan, it was likely this guy. Now, what Whelan did was he laid out a series of tweets, this massive Twitter thread, where he put out the floor plans of the house where the assault took place, and he actually proved that lots of points in the house actually corroborate Ford’s story and her description of the house and what happened. So there’s that.

But, then he tried to say that, “It couldn’t have possibly been at that house, because all the kids, including Kavanaugh and Ford, they actually lived a couple miles away from that house, so how would they ever get to a different place?” As if automobiles, buses, bikes, whatever, don’t exist. Furthermore, he pointed out that the owners of the home allegedly weren’t there, so why would a bunch of high school kids be at a house where the parents weren’t home? Did this guy not go to high school? That’s literally what you do. You look for the person whose parents aren’t home, and that’s where you go. None the less, this man has now tried to smear this other guy, who looks like Brett Kavanaugh, happens to be a middle school teacher, I believe, in Georgia now. He’s not even a high profile person, but he’s trying to pin it all on that guy. He is the fall guy, now. If the assault happened the way that Christine Ford says it did, it was probably the other guy who had a similar haircut to Brett Kavanaugh.

Not only does Ed Whelan now find himself committing libel by putting this online and trying to smear this other guy, he also left the current owners of the home in a predicament because now their floor plans have been released online, along with their address, so everybody knows the entire layout of that house. Whelan found that information on real estate site, Zillow, and decided it was a smart idea to post it. Here’s the problem with this conspiracy theory, is that its already gained traction. Conservatives already believe it. Fox and Friends this morning, already put it out there. They’re already talking about it, and yeah they admitted, “Maybe it’s true, maybe it’s not.” They believe it 100%, and Fox News for the rest of today, I promise you, is going to be pushing this. They will do anything to protect Brett Kavanaugh, as if they all owe him something.

That’s the thing that doesn’t make any sense about this. Why are you sticking up for this guy? Why are you so desperate to have him, personally, on the court? Aren’t there 100 other pro-corporate, anti-consumer, anti-Roe V Wade judges you could just replace him with? Why him? Why are you so hell bent on making it this guy? Not that I want any of those kinds of people sitting on the Supreme Court for the rest of their lives, but you get the point. There’s something really weird about their obsession to confirm Brett Kavanaugh. Even in the light of these new sexual assault allegations, even in light of the four times the mans committed perjury by lying under oath to the Senate committee, couldn’t you find somebody who doesn’t have that kind of history? Oh well, you’re Republicans, so probably not.

None the less, the conspiracy theories about Ford are going to get even crazier from this point forward. They have proven that all week long. Trying to tie her to other organizations, trying to say she’s funded by George Soros is another one that came out yesterday. But this one, put forward by Ed Whelan, and perpetuated by Fox and Friends this morning, not only does it undermine Christine Ford’s allegations, but it’s also threatening to destroy the life of another guy who happens to be a middle school teacher right now. Whelan has done so much damage and hopefully, that teacher down in Georgia sues him for libel, because I think he’s got a pretty easy case to prove there.