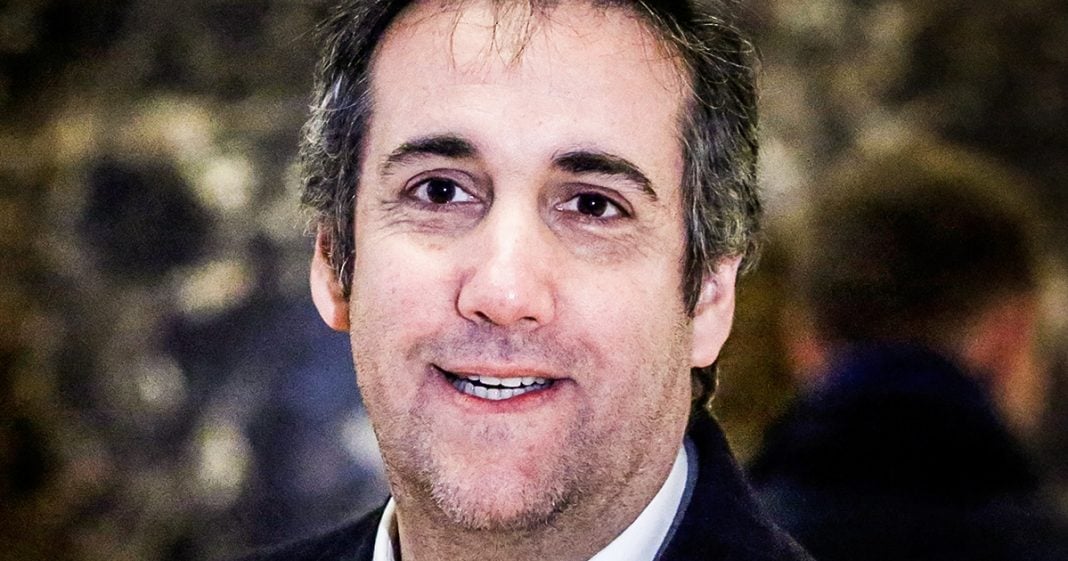 In an accidental tweet this week, former Trump attorney and “fixer” Michael Cohen admitted that he is working with Special Prosecutor Robert Mueller and giving him crucial and critical information about Donald Trump. This new revelation helps explain why Trump has upped his attacks on the special investigation, as he is likely growing increasingly desperate to put an end to all of the cooperation. Ring of Fire’s Farron Cousins discusses this.

In a really bizarre tweet earlier this week, Michael Cohen, Donald Trump’s former lawyer slash fixer, admitted that he has been working with special prosecutor Robert Mueller and he’s been giving him what he calls critical and crucial information about Donald Trump. Not about the Trump family. Not about the businesses. Not about anything else. He’s giving him the information on Trump himself. Now the reason I say this was an odd tweet is because this is the tweet that came from Michael Cohen’s official account. It said, “Good for Michael Cohen for providing critical information to the Mueller information without a cooperation agreement. No one should question his integrity, voracity, or loyalty to his family and country over @POTUS, @RealDonaldTrump.”

Now, this is obviously, if it came from Michael Cohen’s account, it’s written in the third person. Michael Cohen wouldn’t refer to himself as Michael Cohen, or refer to his own integrity, voracity, and what have you. The tweet was deleted almost immediately, but his attorney, Lanny Davis, came out later and said, “No, I sent him to that as a text so that I could post it later, but he just posted it on his line because he got confused or whatever. I don’t know, but I was sending it to him so that I had it so I could just post it on my Twitter later. I don’t have access to his Twitter account.”

Now the origins of the tweet and the third person narrative of it, that doesn’t matter. What matters is that we now have a confirmation from Michael Cohen himself accidentally that Cohen is in fact working with the special prosecutor’s office, and he’s doing it without a plea agreement. He’s doing it hoping, I imagine, for some leniency on the sentencing that he’s gonna be facing very soon, trying to protect his family, and at this point, according to people associated with it, he’s actually out for blood on both Donald Trump and Donald Trump Jr.

This is something we had talked about, I think well over a month ago, was the fact that Michael Cohen was pissed off. Donald Trump came out and supported Paul Manafort, tweeted about him, talked about how unfair it was, how unfortunate it was. He did that with other people under investigation, but he never did it for Michael Cohen. He never offered to pay Michael Cohen’s legal bills, never offered to help him out, never even tweeted a word of support for the guy. And that pissed Michael Cohen off. It was in those moments when Cohen began to get angry about it, that he started coming out and saying, “Listen, my loyalty’s to my family, not to Donald Trump.” And then slowly from there, that trust, that relationship that had been built over decades began to erode. Michael Cohen realized that if you work with Donald Trump, he will screw you over, and that’s exactly what happened to him, and he’s not gonna take it. He’s not gonna have that anymore.

Now, he is working with the special prosecutor, handing him information that he calls critical. All of this points to a Donald Trump take down, possibly in the near future. At least Donald Trump Jr. I mean, the likelihood of Donald Trump making it through his first term as President of the United States is shrinking by the day. With all of these people flipping, Cohen this week, Manafort last week, Pecker, Weisselberg, everybody. Robert Mueller has flipped everybody, and Donald Trump is freaking out about this right now. He is worried about what’s happened, and he should be because if he had done nothing wrong, then there wouldn’t be anything for these people to hand over to Robert Mueller.

Instead it would just be Michael Cohen sitting there for 12 hours because that is how long he talked to him, about the weather, about sports, maybe about movies they saw. But it wasn’t. It was about information that Michael Cohen had that he believed would be of interest to the special prosecutor as they make their case that Donald Trump has broken at least some kind of law here in the United States. I guess we’re gonna have to wait for the final report to find out exactly which law that is.