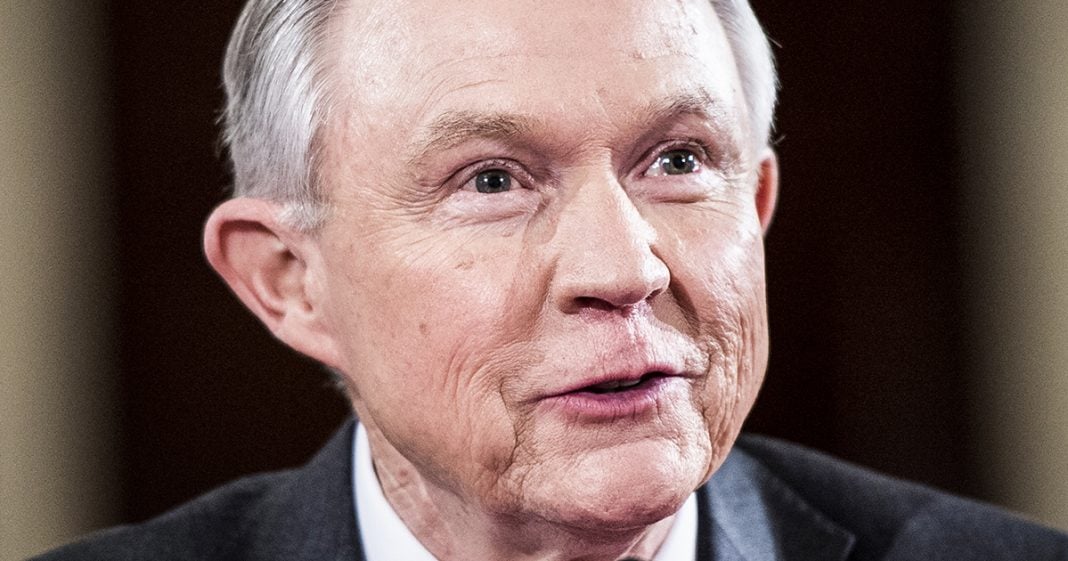 Jeff Sessions and the Department of Justice are working on new rules that would remove bond hearings for asylum seekers coming into the United States, a move that would give Sessions the authority to detain these people indefinitely as they await a hearing. This move came just one day after officials from the Trump administration testified to Congress that they do NOT have indefinite detention of detainees. Ring of Fire’s Farron Cousins discusses this.

Jeff Sessions is right now determining whether or not to try to overturn a rule that would allow him to deny bond hearings to people who come to the United States seeking asylum. Here’s what that means. A while back, there was a Supreme Court ruling that said that immigrants coming to the United States did not have to be given bond hearings, but that was just immigrants. Jeff Sessions is now trying to stretch that into asylum seekers, people who do come here legally, use the asylum process, and guess what, it would even apply to people who have been able to credibly prove that if they were sent back to their homes, they would die. They would die from warfare, gang violence, domestic violence, or famine, or anything like that. They’ve proven that if they send them back, they’re going to die. And Jeff Sessions wants to take bond hearings away from them.

And if he does that, that will mean that the Administration can detain these people indefinitely, until they go before an immigration judge and have their case finally heard and settled right then. And for many people, that can take years. We already have a shortage of immigration judges. We already have a backlog of immigration cases. So every time a new one comes in, it goes to the back of the line. So if we deny these people bond, bond hearings even, they can’t leave. They’re stuck in jail. They’re stuck in these detention facilities.

And to make things worse, this Administration is also trying to undo the Flores settlement which says that children, migrant children, can be separated from their parents for only 20 days. They want to get rid of that. So that if you come here and we take your kid away, you’re an asylum seeker, you may have to sit in jail for years if we pass this no bond rule thing. Your kid can be separated from you for just as long a time if we overturn the Flores settlement. And then by the time you get out, you won’t even recognize your kid. They won’t remember who you are.

We’ve already seen that happen with kids who’ve been separated for only a matter of weeks. And this Administration wants go and make it so much worse. These are heartless, evil, disgusting individuals led by Jeff Sessions at this point. The Department of Justice, of which Jeff Sessions is the head, is the U.S. department that oversees all of the immigration courts in the United States. Jeff Sessions in this instance is the man in charge, and he is using what little bit of authority he has to make life a living hell for people, even when they come to this country legally.

Jeff Sessions is a white supremacist. And there is nothing you could say, no evidence you could present that would be able to change my mind on that because what we have seen from this man, the policies, the rhetoric, his history, every single bit of it points to Jeff Sessions hating non-white people.