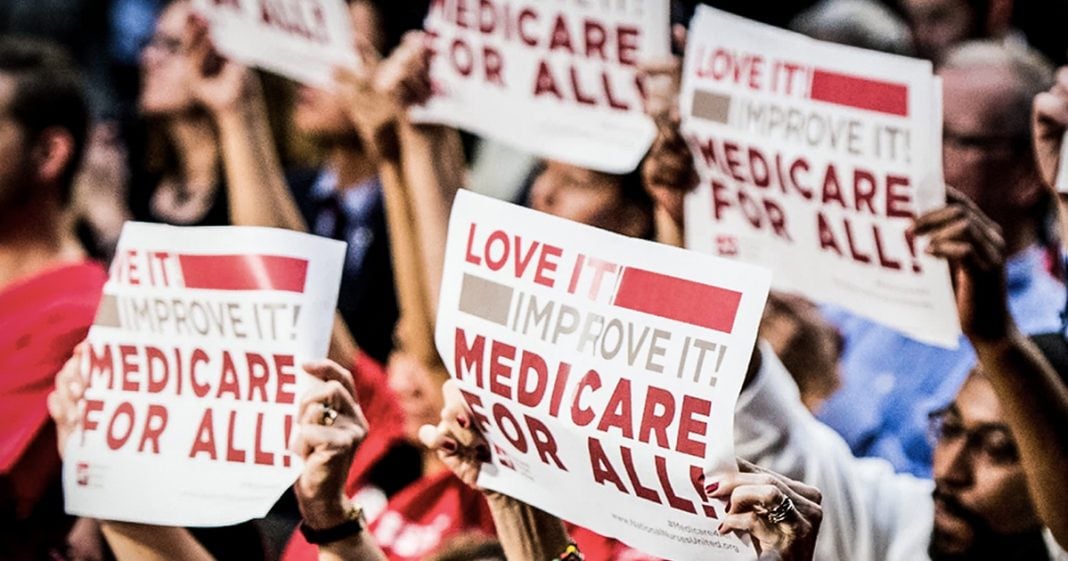 There’s a very clear and easy choice to make in this year’s midterm elections – The choice is between a Party that wants to actually improve healthcare and work towards a Medicare for All system, or the Party that wants to deny you coverage if you have a pre-existing condition. That seems like a pretty easy decision considering the fact that a majority of American voters from all parties want Medicare for All. Ring of Fire’s Farron Cousins discusses this.

There’s a lot at stake in this year’s mid-term elections, but there’s a lot more at stake than just getting Trump out of office. What’s more important at this point is making sure that we can get these anti-consumer, anti-human being Republicans, out of office.

One of the biggest issues that’s not necessarily on the ballot this year, but it is on the ballot, is healthcare. Republicans for the last few years have been trying to strip Americans of their current coverage under Obamacare, that says that you cannot be dropped or denied health insurance based on a pre-existing condition. They have been trying to kill that and replace it with something that says maybe you can get coverage with a pre-existing condition, but even if you do, you’re gonna have to pay a lot more money which is what Obamacare was trying to prevent, and it had prevented, and it was helping people.

Under the Republican plan, people with pre-existing conditions would either be priced out of the program or they could, in fact, be outright denied insurance all together, leading to yet another insurance crisis, which is why we needed Obamacare in the first place.

Republicans still have no plan. They don’t know how to cover people with pre-existing conditions. So now as we inch closer to the mid-terms, they’re trying to avoid the issue of healthcare all together, even though 75 percent of respondents in a recent poll said that healthcare is a major factor on who they’re gonna vote for this year. And a majority of people also said they trust the Democrats more on the issue of healthcare than they do Republicans.

For the month of August, 50 percent of the ads that Democrats ran on the national level, 50 percent of ’em, were on the issue of healthcare. So Democrats are running more ads on healthcare than Republicans are on how great the economy is and how great their tax cuts were. Probably because Americans understand at this point, they’re not getting anything from those tax cuts, that all went to the wealthy elite.

So you have a very clear choice when you go to the polls this year. Do you want to vote for the party that may kick you off your insurance if you have a pre-existing condition, or at the very least make you pay more? Or are you gonna vote for the party that says, “You know what, we’re finally open to Medicare for all and we think that this is the natural evolution of healthcare here in the United States?” That is a very clear distinction. It is a very easy choice to make for anyone who happens to have a pre-existing condition, anyone who has a family member with a pre-existing condition. You know what choice to make on that issue. The only question is, can Democrats keep this up?

So far they’ve actually done a really good job with the ads that they’re running this year. They’re not running as the anti-Trump party, they’re running as the issue party. That is what was missing from the 2016, 2014, 2012 elections. Democrats refused to run on the issue of Obamacare, but this year after seeing now that people actually support it when they understand what it does, they’ve finally woken up and they’ve decided, you know what, this policy wasn’t as bad as Republicans said it was, people seem to like it and want it to go even further, so I am finally willing, after eight years, to run on this very important issue.

If they can keep this up, there is no doubt that they’re gonna pick up enough seats to once again regain the majority in the U.S. House of Representatives.