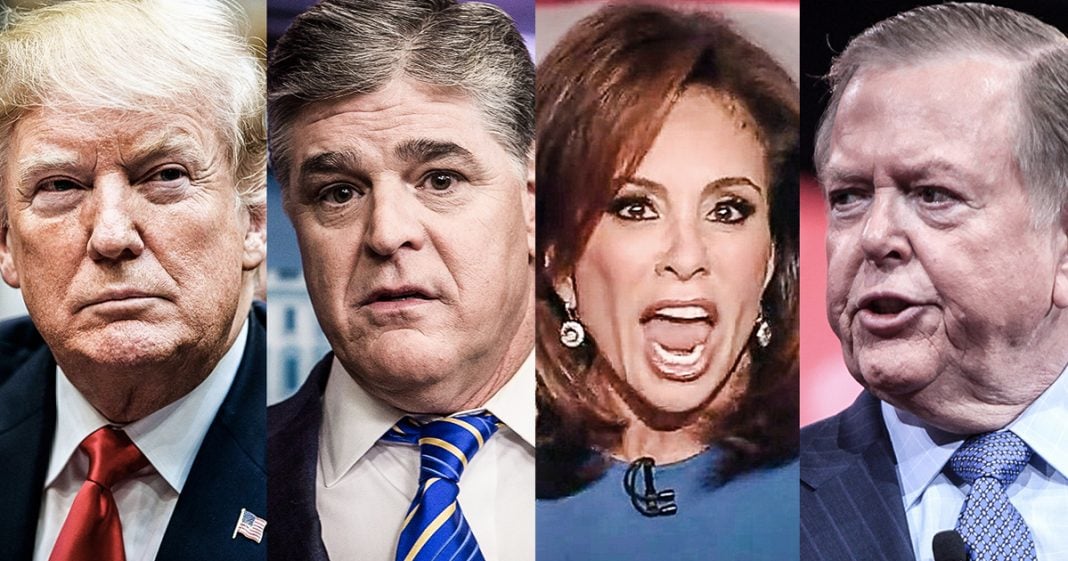 Donald Trump’s plan to declassify confidential materials related to the Carter Page FISA warrant was apparently pushed by multiple hosts at Fox News, including Sean Hannity, Jeanine Pirro, and Lou Dobbs. Trump tweeted out that these hosts gave him great advice on this issue, advice that experts have said is both a national security threat and an attempt to obstruct justice. Ring of Fire’s Farron Cousins discusses this.

Earlier this week, the Trump Administration announced that they’re gonna declassify some of the documents related to the Carter page FISA warrant as well as release some text messages and other interviews conducted with DOJ and FPI employees, well later in the week, Donald Trump appeared on the Hill T.V., where he actually explained why he made this decision. And, according to Trump himself, during that interview, the reason he decided to declassify all of these things, that experts have agreed is both a national security threat as well as clearly obstruction of justice, is because Fox News’ hosts asked him to.

Here is the exact quote, what Donald Trump said in that interview, “I have been asked by so many people that I respect, please, the great Lou Dobbs, the great Sean Hannity, the wonderful, great Jeanine Pirro”, all of whom are Fox News’ hosts. So, there we have Donald Trump in an interview with The Hill T.V. admitting that Fox News’ hosts are calling the shots. Fox News’ hosts convinced the most powerful person in this country to declassify documents that are most likely going to get him into even more legal trouble than he’s already in. But of course, Fox News’ hosts are pretty stupid, so it’s not surprising that they would think that this would be a good idea.

But, it also helps give us a little more insight into how much power these Fox News’ hosts have over the president of the United States. And that’s not a good thing. Racists like Lou Dobbs shouldn’t be able to tell the president what to do. Serial liars like Pirro and Hannity shouldn’t be able to have that much influence over the president, but they do. And here’s the thing about the release of these documents. The intent is there, and the intent is what you need to prove obstruction of justice. He is trying to release the text messages of Comey, McCabe, Bruce Ohr, as well as interviews that Bruce Ohr conducted with people, in an attempt to discredit the entire investigation that could also potentially influence witnesses testifying in front of the grand jury, or speaking with Robert Mueller.

As for the Carter page FISA warrant, that’s probably gonna be information that Donald Trump doesn’t want the public to know about. Because, it’s going to include a lot of things that we didn’t know yet, we already know from the Devin Nunes memo that came out earlier this year, even though it was heavily redacted, it did still tell us that the warrant was not based on the Steele dossier, which Donald Trump still claims to this day, even though Nunes’ own memo said that it wasn’t.

So, what information does he think is gonna be in there that’s gonna somehow vindicate him? Whatever’s in there, is gonna make him look even worse, and of course as for the national security issue, you have the names of informants that the United States depends on over seas, those are gonna be released, which could either put those peoples’ lives in danger, or it could make them no longer willing to corporate with the United States, cutting off a very valuable intelligence channel.

But, Trump doesn’t care, and more importantly, the folks at Fox News don’t care. And they are clearly the ones calling the shots with this administration, and that is according to Donald Trump’s own admission.