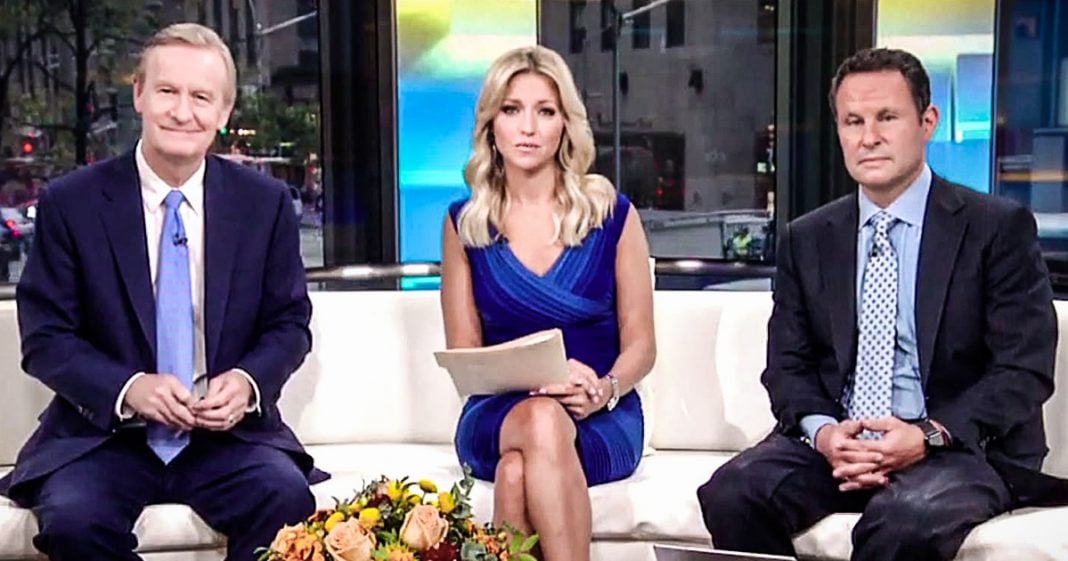 Fox News hosts have spent the last few days attacking Dr. Christine Blasey Ford over the allegations she has made against Supreme Court nominee Judge Brett Kavanaugh, going as far as to push the insane conspiracy theories about Ford that are floating around the internet. But this isn’t new for the network – they always attack the victims with one excuse or another so they can stand up for white men. Ring of Fire’s Farron Cousins discusses this.

If there’s one thing that the people at Fox News love than beating up on people who aren’t white, it’s beating up on people who accuse someone else of sexual assault, as is the case with Doctor Christine Ford, for pretty much this entire week on Fox News. We have had Carlson, Hannity, Fox and Friends, Greg Gutfeld, Jesse Watters, all of them spending all week trying to discredit Doctor Christine Ford for coming forward with allegations of sexual assault against Supreme Court nominee, Brett Kavanaugh. The entire network is bending logic, twisting reality in order to smear this woman, who has now had to go into hiding because of the death threats that she and her family are receiving. Fox News has helped push these wild conspiracy theories about her that she’s mad at Kavanaugh’s mother because she foreclosed on her parents’ home back in the late 90s. Or that her brother worked for the law firm that represented Fusion GPS, both of which are completely false, by the way.

Excuse me, Brett Kavanaugh’s mother actually did not foreclose on Doctor Christine Ford’s parents. They kept their home because they were able to refinance, so everything was dismissed. They actually still have the home. As for the brother working for the law firm that represented Fusion GPS, yeah, he worked for that law firm, but he left in 2004, seven years before Fusion GPS even became a thing, so really nothing there. He was gone for seven years before Fusion GPS was even founded.

Nonetheless, this network wants to smear her. We had Gutfeld, and Watters yesterday saying, “Something doesn’t quite add up here. Why did she wait so long? You know, she’s doing things in a way that people would do if she, you know, wasn’t actually a victim. She’s not following the necessary steps. There’s something fishy here. I don’t like it.” Do you know why she waited so long? Three days after she came out she’s already in hiring because of the death threats. You people are attacking her left and right trying to smear her, say that she’s a liar, and you’re defending the man accused of this, and even writing off like, “Well, if he did it oh well. What kind of a person is he now?” That’s why women don’t come forward. That’s why.

Fox News is leading the charge here, and honestly this isn’t something that should surprise anyone. You go back and you watch any old segment from that network where they’re talking about a woman accusing a man of sexual assault, with the exception of Harvey Weinstein, they love going after him and believing so supporters … or accusers, excuse me, because Weinstein gave money to Democrats, so of course it’s true about him. Of course, it was true about Al Franken doing that thing in the picture, but any time a powerful Republican gets accused, “Nah, this woman’s a liar.” Oh, if she’s accusing an athlete, “Oh, she’s just looking for money. Maybe she had too much to drink. Maybe she secretly wanted it.” Those are the excuses that we have heard come out of Fox News over the last decade any time they talk about sexual assault. What they’re doing right now to Doctor Christine Ford is no different than what they have been doing to sexual assault victims for at least the past decade, if not longer.

Of course, let’s not forget that this is a network that made it their practice to help cover up the sexual harassment that was taking place behind the scenes at the hands of some of their most popular hosts. Covering up sexual assault and sexual harassment is in the very DNA of Fox News itself. Any time a woman comes forward with a story they will always give the benefit of the doubt to the man while trying to smear the victim into hiding, which is exactly what’s happened this week.