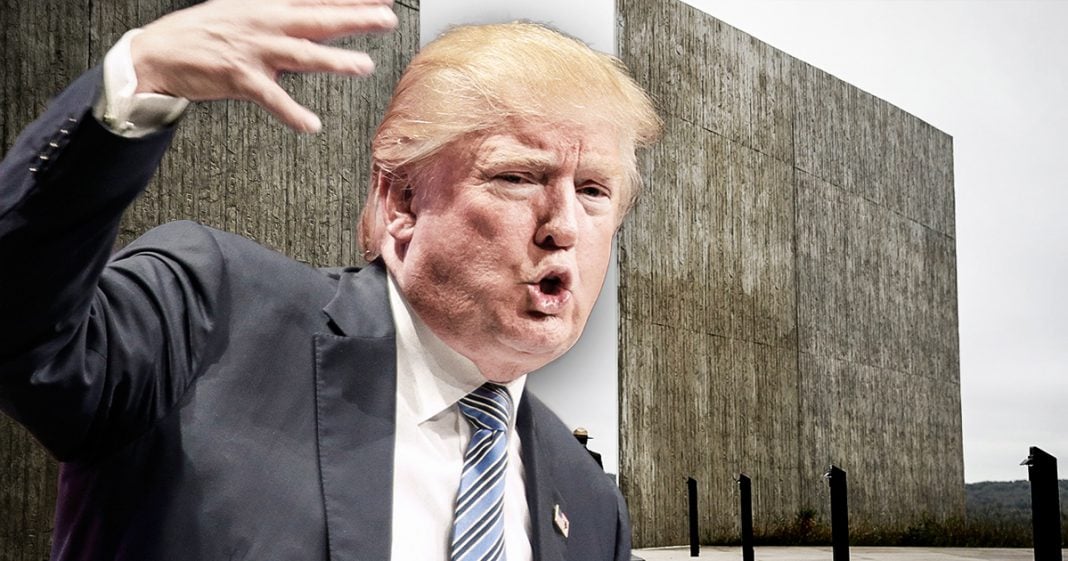 Donald Trump said in a recent interview with The Hill that his visit to the 9/11 Memorial Wall has reinvigorated his desire to push harder for his border wall between the United States and Mexico. This man must really love walls, but it is a disgusting thought to be viewing a memorial for one of the worst attacks on US soil and having your first thought be that you want to shut off our country from the world. Ring of Fire’s Farron Cousins discusses this.

Donald Trump really, really loves walls. I know that’s a weird thing to say but Donald Trump just admitted in an interview this week with the Hill TV that it was actually during his recent visit to the Flight 93 9/11 Memorial Wall that has the names of the victims that he was inspired by seeing that wall to make a harder push for his border wall.

So while looking at a wall commemorating the victims of one of the worst attacks to ever take place on US soil, that inspired him to go down to our southern border and push harder for his border wall that a majority of people in this country think is a really, really stupid and bad idea.

Here’s what Donald Trump said during that interview. “They built this gorgeous wall where the plane went down in Pennsylvania, Shanksville and I was there, I made the speech and it’s sort of beautiful what they did is incredible. They have a series of walls, I’m saying it’s like perfect, so, so we are pushing very hard.” So Donald Trump goes to this memorial, sees the names of the victims and the first thing that pops into his head is, “Wow we need to keep people of color from coming into the United States.” That’s his reaction, that’s what he just admitted to. That seeing this, being reminded of it on 9/11 means we need to get rid of these non-white people, put up major walls, maybe one like this. “This is a nice wall, I like this wall, why can’t we do this down here?”

That wall was to commemorate victims. Your wall is to show the rest of the planet just how racist we’ve become as a country. There’s a little bit of a difference there in case you can’t see it yourself Donald. Nobody wants this border wall. Experts have agreed that it’s going to be wholly ineffective. It’s going to cost us billions of dollars that could be better spent literally anywhere in this country on anything and yet this is the hill you want to die on? This is the stand you want to make? Showing the rest of the world how xenophobic we in the United States truly are when we put a cult leader like you in charge of the country.

Not the best message to be sending. But more importantly a horrible waste of money and a horrible fruitless project. This is not going to do anything to stem the tide of illegal immigration into the United States. Nothing you have done has slowed it down. Why not trying to be a little bit more compassionate? Why not open a few more immigration courts so we can get these things processed a little faster, the cases. Get people coming into this country through the legal means.

Maybe make it a little easier. Maybe make it a little more clear so that they understand what they have to do. There are simple steps you can take to fix it and treat these people as if they were human beings, but you don’t want to do that. You want to send a message that they’re not welcome here and the only reason you don’t like them is because of their skin.