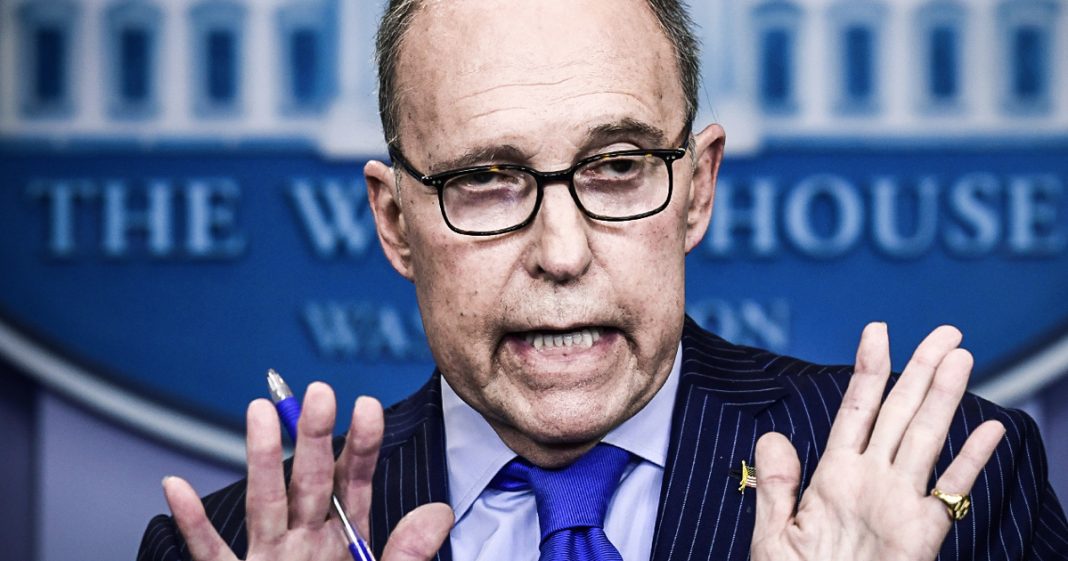 Donald Trump’s top economic advisor Larry Kudlow made it clear this week that entitlement cuts are on the horizon, likely right after the midterm elections. The only way that these cuts can be stopped is for Republicans to lose their majority in Congress, otherwise, they’ll be cutting Social Security, Medicaid, and Medicare to pay for their tax cuts for the wealthy. Ring of Fire’s Farron Cousins discusses this.

Donald Trump’s top economic advisor and former CNBC TV host, Larry Kudlow, went to the Economic Club in New York recently where he assured the people in that room, obviously mostly wealthy well-to-do folks, that in order to pay for their tax cuts and to prevent the deficit from going out of control, there’s going to be some budget cuts coming pretty soon. Most likely after the midterms. Those budget cuts that Larry Kudlow is referring to are entitlement cuts. Social security, Medicaid, Medicare. Programs that every working American in this country pays into every time they get a paycheck.

Larry Kudlow is just now the latest Republican hack to come out and tell us that, “Yep, those programs are going to be on the chopping block because how else are we going to pay for this one-and-a-half trillion dollar tax cut that we just gave ourselves and our wealthy buddies? They need that money. People on social security, Medicaid, Medicare, they don’t need those things. I mean, would you rather see a multi-billionaire buy a new yacht than an elderly person living off social security?”

I mean, really, that’s what this argument comes down to, when you really drill into it. That’s what Republicans are trying to tell us. That the child who’s on Medicaid because their family does not get health insurance and they cannot afford to buy it otherwise, that child on Medicaid shouldn’t have that because we want a wealthy person to buy another yacht. I use the yacht example because that’s exactly what a Florida congressman did on the day that he signed this tax cut legislation, voted yes on it. Then later that afternoon, went out and bought himself a new multi-million dollar yacht, which happened to be the exact same amount that he was going to save from the tax cut.

Larry Kudlow, Paul Ryan, Republicans across the board, Donald Trump, Mike Pence, McConnell, they have all told us the same thing. That there is nothing in this country more important than making sure rich people get richer. That is the message of today’s Republican Party. It was the message of the Republican Party 40 years ago. It’s just that back then, people thought maybe there’s something to this whole thing. Today we know better. We knew better back then, but too few people were willing to listen, but we know better now.

My grandmother, for one, she’s in her mid-80s. Lives off social security and Medicare. If she did not have those two things, she would be dead. That is not a unique story among American citizens. Most of us with older relatives, older friends, maybe even ourselves, in that same boat. Without those programs that we spent our entire working lives paying into under the guarantee that it was going to be there for us when we needed it, now they’re telling us they’re going to cut it back.

Hey, people may die, you may not be able to get your medicine that you have to take every day to keep your heart beating, but isn’t it more important that this wealthy Florida Republican congressman and all his buddies get to go hang out on his new multi-million dollar yacht? Isn’t that worth your grandmother’s life or your mother’s life? Your father’s life? To Republicans, it is.