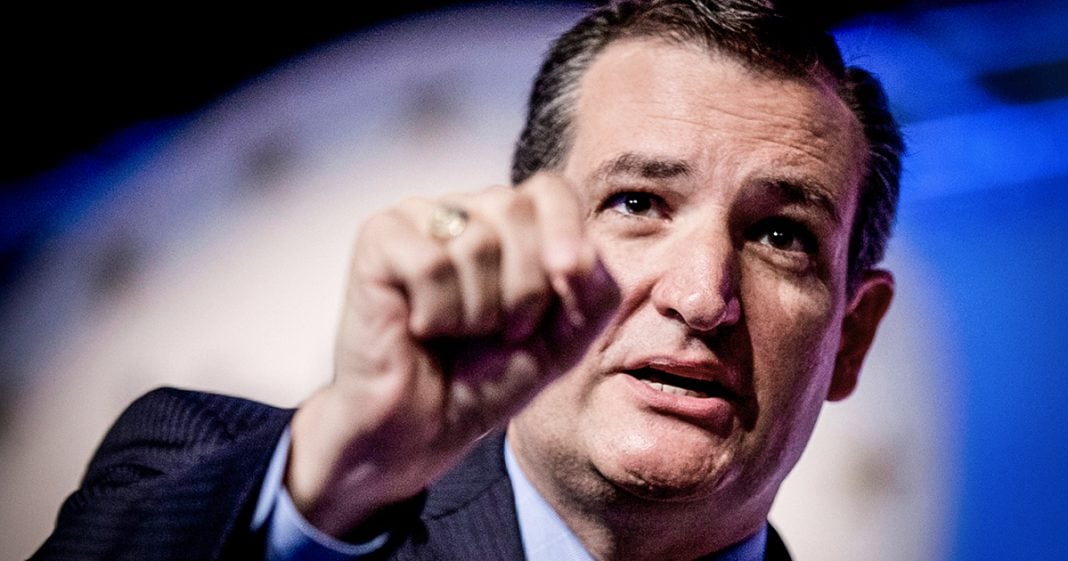 Republican Senator Ted Cruz keeps proving over and over again just how deranged and desperate he is to hold onto his Senate seat. His latest insane rant had him stating that his challenger, Beto O’Rourke, would ban barbecue in the state of Texas. While he claims he was joking, his past comments about his opponent clearly indicate otherwise, as Ring of Fire’s Farron Cousins explains.

When it comes to being pathetic and desperate, nobody in this country does it better than Ted Cruz. His entire campaign against his democratic challenger, Beto O’Rourke, has basically taught us everything that we should not do if we ever want to run for office.

Cruz’s campaign’s latest I guess moment of mental insanity came a few days ago when Ted Cruz actually suggested that if he were to win Beto O’Rourke, he would outlaw ban barbecue in the state of Texas. Now his defenders immediately came out and said, “No, he was just kidding about this. He doesn’t actually mean Beto O’Rourke is going to ban barbecue in Texas.” But then he went on to say it three more times, different venues, different outlets, said the same thing. Beto will ban barbecue. So if it were a joke don’t you think he would say it one time, have a good giggle, and move on? He wouldn’t keep repeating the same statement if he wasn’t trying to get people to believe that that is what is going to happen.

But again, that’s really just the latest in all of the insanity we have seen coming out of the Ted Cruz campaign. He’s also gone after Beto O’Rourke because the guy used to play in a punk rock band. Oh how horrible is that. He did a parody of the Alabama song If You’re Going to Play in Texas, where he substituted the lyrics with his own attacks on Beto O’Rourke. He’s criticized O’Rourke for switching his name to Beto or running as Beto instead of his legal name, Robert, because he believe that’s an attempt on Beto’s part to appeal more to the Hispanic base in the state of Texas.

Now let’s not forget that Ted Cruz’s real name is Rafael Cruz, so Cruz actually did the opposite of what he’s accusing Beto of doing. Ted Cruz wanted to appeal to all the white folk in Texas, so he changed his name from Rafael to Ted so people might overlook the Hispanic heritage in Ted Cruz’s family tree.

And of course we can’t forget the fact that Ted Cruz is also begging Donald Trump to come to his state and help him even though Trump has mocked Ted Cruz, his wife, and his father relentlessly ever since the two were running for president against each other.

But this all kind of just paints a very clear picture of what a disgusting, immoral, pathetic and desperate human being Ted Cruz truly is. If this man loses his senate seat, he has nothing left in life. That is the only thing that matters to him. We’ve seen that his own kids don’t even want to hug him. They don’t want to be near him. He accidentally punched his wife in the face twice while trying to hug another guy, didn’t seem to notice she was there because the only thing he notices is whether or not he’s still a serving U.S. Senator. There is something very, very wrong with Ted Cruz. His values are way out of whack, doesn’t care about his family, only cares about this pathetic job that he may or may not hold onto at this point, because that is the only identity that this man has ever known.

And as we get closer to the election, as the polls still show them pretty much in a statistical dead heat, the attacks on O’Rourke coming from Cruz are goin to get more desperate, more insane, and even more implausible.