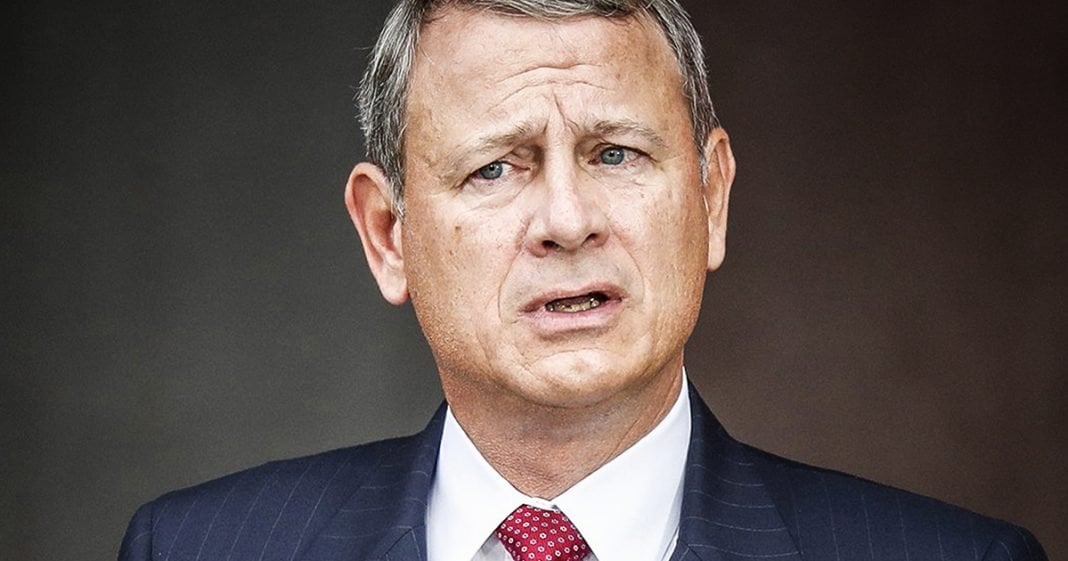 Supreme Court Chief Justice John Roberts got smacked down by his own Court this week after they collectively overturned a stay that he issued in his now-failed attempt to hide the identities of dark money donors. Now that Roberts’ stay has been vacated, we will get to know who is funding which dark money groups, creating at least a little bit of transparency in a post-Citizens United world. Ring of Fire’s Farron Cousins discusses this.

You know, it’s not very often that we get good news out of the US Supreme Court, and especially considering the fact that just three days ago we got some really bad news out of the Supreme Court. But on Tuesday of this week the Supreme Court decided to give John Roberts, the Chief Justice, a big middle finger by vacating the stay that he had put in place with regard to revealing the identities of dark money campaign donors.

Here’s the entire story. Many years ago Citizens for Responsibility and Ethics in Washington filed a lawsuit against Carl Rhodes, Crossroads GPS because they wanted to know who was funding it, where the money was coming from, where it was going. They wanted transparency.

Well, fast forward many years later, the lawsuit is actually still ongoing. But recently, back in August, a district judge said, “Hey guess what Crossroads? Crew was right, you have to reveal those donors. We have to bring a little bit of transparency to our very convoluted and complicated campaign finance kerfuffle that we’ve created.”

But then on Tuesday the entire rest of the Supreme Court, conservatives included, banded together and told John Roberts, “Yeah, you can’t do that. We’re going to vacate your stay, we’re going to nullify your little weekend ruling that you didn’t even consult us about and we’re gonna make sure that people get to know who’s funding these dark money groups.”

Again, that was a unanimous decision from the remainder of the Supreme Court, liberals and conservatives. That is quite remarkable folks. And yes, this is a very big ruling, a very big decision that is going to have an impact on our elections.

But that’s why John Roberts intervened, he didn’t want those donors to be revealed before the mid-terms. This was a purely political move on behalf of John Roberts. The rest of the Supreme Court, shockingly, said, “We don’t care, people need to know and this is what we’re gonna do.”

So, a very rare time I get to say this, but way to go US Supreme Court! Except for John Roberts. You guys all did the right thing and I’m very shocked and proud and hopefully this will bring us just a little bit more transparency as we head in to the mid-terms.

So pay close attention folks, and when you see those political ads start running non-stop on your TVs within the next week or so, because you just might catch a glimpse of which disgusting individuals, which of the wealthy elite in this country are actually funding them.