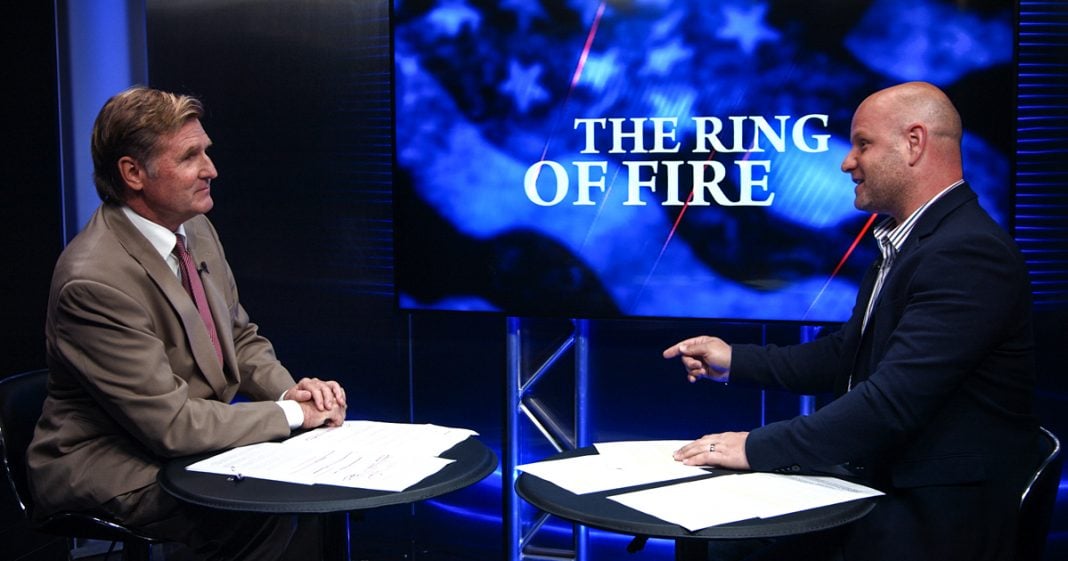 John Bolton told the International Criminal Court recently that they better not investigate any of the war crimes committed by the United States. Ring of Fire’s Mike Papantonio and Farron Cousins discuss this issue.

Mike Papantonio: John Bolton told the International Criminal Court recently that they better not investigate any of the war crimes committed by the United States. Okay now, let’s think about that just a second. We have this body, this international body, that that’s their job.

Mike Papantonio: Bolton, himself, I was just going to go there. Chaney, Bolton, all of the people that were involved in Iraq. One person that I want to bring out here though, it’s just such an irony to me is you have all of the Progressives, oh we love Brennan. Now how many stories did we do about Brennan when before the Liberals embraced him as being such an important character, before he appeared on Bill Mayer and Bill Mayer’s trying to make him look like he’s … this is a really decent guy. You talk about a war criminal … this guy was a war criminal but now since he speaks out against Trump, all of a sudden … oh no, he’s kind of the darling of the Democratic party. He’s like Clapper, the darling of the Democratic party. In other words, the entire spook industry, who Liberals have always had the good sense, myself included, I’ve always had the good sense to understand they are dangerous.

Go back to the Church hearings, you look at the Church hearings, they’ll show you just how dangerous it is when we let the spook industry do what they do. So that’s the heart of this story, I gotta promise you. The heart of the Bolton story where he tells … he says, “Don’t investigate war crimes”, is because it moves right into the very heart of the United States spook industry. And you know who’s in there? Brennan.

Farron Cousins: You’ve got Brennan who was one of the architects of the Bush torture regime, John Yoo, Alberto Gonzales, Gina Haspel, whose now the CIA director.

Farron Cousins: She helped kind of …

Farron Cousins: She perfected the black site, torture spots, ran one of them. And those are the people … those are all Bolton’s friends because he did it with them.

Mike Papantonio: But it’s not … You want to go to the easy stuff. You want to … oh, they don’t want Chaney investigated, they don’t want Bush investigated, no, this is about the spook industry trying to protect the spook industry. We don’t want anymore stories like Allende where the United States assassinates Allende after he is elected and Pinochet is then appointed by the United States and he does this horrendous, just the worst kind of dictator, just murderer. Truthfully, if you look at the Pinochet stories, they’re blood curdling. We put Pinochet there, okay. There was a time when that was important to Progressives. Progressives would say this is how dangerous the spook industry is. Henry Kissinger made this happen, assassinated Allende, okay.

Now Bolton is saying to the people that would ordinarily look at that, he’s saying, “Don’t investigate us” because it is the heart of the spook industry. The FBI, the CIA, the NSA, all of these characters they just operate beyond anybody’s sight. I think now they’re regarded as the Deep State. Sometimes you’ll hear them, they’re part of the Deep State. Well, the truth is, Bolton is very afraid of independent investigations into that Deep State spook industry. That’s what this story’s about as I read this.

Farron Cousins: And he didn’t just tell the ICC that you shouldn’t investigate us … and this is basically regarding all the pictures we saw from Abu Ghraib and what happened at Gitmo, but he also … they issued a warning to other countries around the world telling them …

Mike Papantonio: If you do …

Farron Cousins: Yeah, if you cooperate with this and extradite any of our people over to the Hague, you’re going to face very serious consequences from the United States. So this is, it’s obvious he wants to cover up … there’s no question we committed war crimes. We have the photographic evidence to prove it. We have the testimonies, the memos from the White House to prove it so we know it happened and the only reason he doesn’t want it to be investigated … It’s not because he doesn’t want the little soldier here or there who did it to go to prison, it’s because it’s going to uncover a hell of a lot more than we already know.

Mike Papantonio: I gotta tell you, there’s a lot of parts to this story but as I read this story, it is about Bolton protecting American spooks, that’s what it’s about. It’s the heart of the CIA, the heart of the Clapper types, the Brennan types, all these people that we’re now embracing, Progressives are embracing … Oh, these guys are heroes. How crazy is that? This is who he’s worried about being investigated.

Farron Cousins: I think part of that too is they always think, well the enemy of my enemy is my friend … not when that enemy is also a war criminal.

Farron Cousins: Right, you gotta draw the line somewhere and I think drawing it at war criminals …

Mike Papantonio: Yeah, it sounds pretty safe. We have about a minute, a couple of minutes here. Brett Kavanaugh is inciting, well inciting a lot of angst, but he’s inching closer and closer to being confirmed in spite of the recent allegations against him and not only is Kavanaugh a threat to women, he’s a threat to every consumer in this country. This story tells the other part that’s not being talked about. 87% of the time, Kavanaugh always lines up for corporations, if it’s a consumer versus a corporation, 87% of the time no matter how horrendous the conduct is, he will side with corporations.

Farron Cousins: This Public Citizen did a great job, they put together this great list. In seven out of seven cases involving victims suing for compensation over police or human rights abuses, every single time Kavanaugh goes with the police against the victims. 15 of 17 involving worker rights, he’s sided with the corporation. 11 of 13 environmental cases, sides with the corporations. 18 of 22 consumer or regulatory issues, sides with corporations.

Mike Papantonio: Look, Kavanaugh’s a punk. We’re finding out now how much of a punk he is. These hearings taking place, this is some really, this is some cuckoo activity on his part. It doesn’t have anything to do with his law, it has to do with him being a nut.

Mike Papantonio: This guy may actually be a little bit off and these stories, as it continues to unfold about this woman who says look, basically he and his pal tried to rape me and I thought he was going to kill me … very important story. We’re going to be talking about that probably tomorrow …

Mike Papantonio: … as this continues to develop. I’m Mike Papantonio here with Farron Cousins, you’re watching Ring of Fire, we’ll be right back.