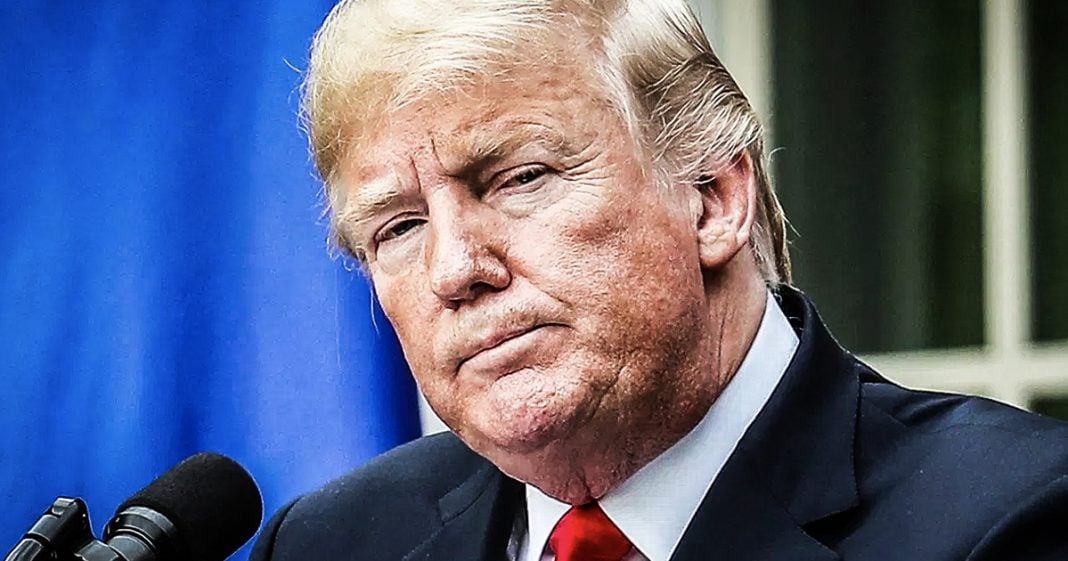 According to a new Huffington Post / YouGov poll, 25% of Americans actually believe Donald Trump’s insane conspiracy theory that nearly 3,000 people DIDN’T die in the aftermath of Hurricane Maria in Puerto Rico. The government itself has already accepted the 2,975 deaths as accurate, but that hasn’t stopped Trump from claiming a conspiracy against him to make him look bad. Ring of Fire’s Farron Cousins discusses this.

A new Huffington Post YouGov poll has some really bad news for the United States. That poll shows us that 25% of people in this country actually believe Donald Trump’s crazy conspiracy theory that the death toll in Puerto Rico from Hurricane Maria was inflated and 3000 American citizens didn’t actually die from that disaster.

A quarter of people in this country actually believe that absolutely insane claim made by the President of the United States, a claim that’s actually now going through the conservative echo chamber telling people that, “No, nearly 3000 American citizens didn’t die. The Democrats are up to this. This is some kind of Democratic ploy to convince people that Trump is an absolute failure.”

Listen, the Democrats don’t need any ploys or tricks or what have you to show people that Trump is an absolute failure. All we have to do is look at every single thing he’s done since becoming President, and hell, if you want to, throw in everything he did before becoming President, and you can see that this guy is an abject failure in nearly every area of his life.

The Democrats don’t need to inflate a death toll just to make him look bad. He’s doing a good enough job of that himself. But nonetheless, we have 25% of people in this country today that are willing to believe anything this man says, to look at reality and say that that’s not reality, to look at these facts and figures and statistics and just say, “No. That’s not what I think, so I disagree with your math.”

That’s not how math works, that’s not how reality works, but unfortunately that’s how these Trump supporters work. Only 10% of Trump supporters in this country actually believe that the Puerto Rican death toll is almost 3000 people. Only 10%. Here’s the thing, the initial death toll, this is the reason why it went up from 62 to 2975, is because the initial death toll only counted people who died from falling limbs, or drowning. That’s it.

If one of those two things from the hurricane didn’t kill you, you weren’t counted. Then, as time went on, they realized that having no clean drinking water for nine months, letting it fill up with deadly bacteria, yeah, that kills people. That is related to the response from Hurricane Maria. Not having electricity for a little over a year, which happened in many areas in Puerto Rico, that can also be a killer, especially when you’re talking about an island that has abnormally high summer temperatures, elderly populations cannot handle that, so even something as simple as the lack of a running air conditioner can cause someone to die from heat stroke.

All of those things put together which were a direct result of that hurricane is why that death toll increased from 64 to 2975. It baffles me that people don’t seem to understand that. Living in these rotting conditions because you don’t have a roof, you don’t have proper infrastructure, you don’t have clean water, you don’t have electricity. That kills people. It kills people all over the world. So why would we think that it wouldn’t happen to American citizens down there in Puerto Rico? Because it 100% did.

25% of people in this country don’t want to accept that as reality which means we’ve got a very, very real problem with how people perceive reality vs fantasy.