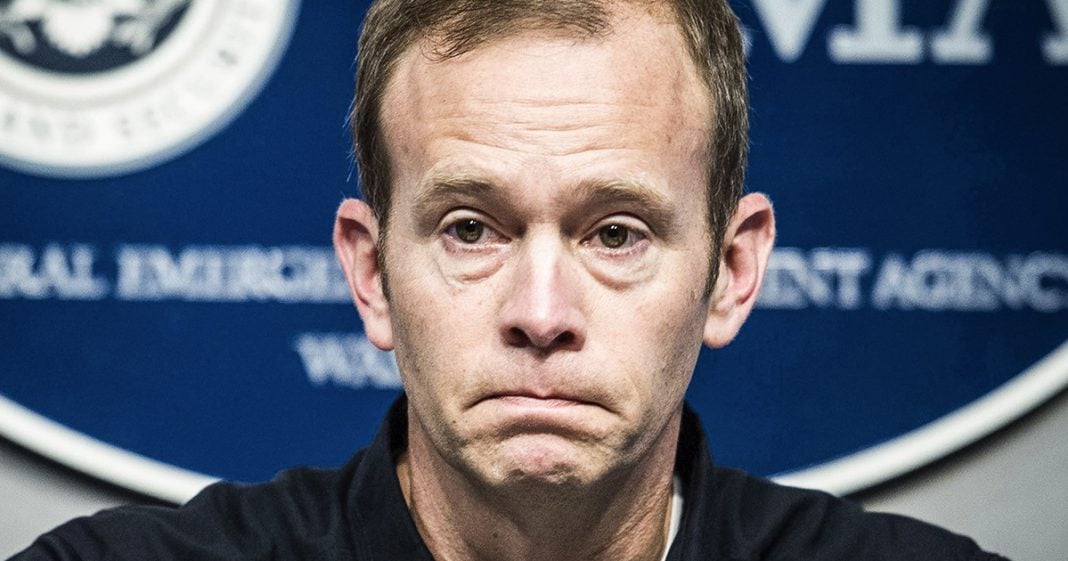 Brock Long, the head of FEMA, is facing a possible criminal prosecution over a spending scandal that he and a few of his subordinates engaged in. Unfortunately, the scandal wasn’t that they spent too little trying to save lives in Puerto Rico, but his complete incompetence in the face of natural disasters should certainly remain in the spotlight, even as he faces this new criminal probe. Ring of Fire’s Farron Cousins discusses this.

Brock Long, the head of FEMA here in the United States, along with two of his associates over at FEMA, are now facing a potential criminal prosecution for the misuse of government vehicles and government spending.

Here’s the story. Brock Long was under investigation and had been, apparently, for a long time. To find out why exactly he was using government-owned vehicles, a fleet of them, a fleet of government vehicles to travel 400 miles to his home in North Carolina every single week, basically, since taking the job at FEMA. Now, there were multiple vehicles. He would take multiple staffers with him every single week. Most of them said that he would leave typically on Thursday, just take every Friday off so he could have a long weekend back at his home. And the staffers then went with him were forced to stay in nearby hotels so that he could access them if he needed to, but we, the taxpayers had to foot the bill for those hotels, and obviously you’re staying in a hotel. They had to eat every single meal out, so we had to foot the bill for that, as well.

But the biggest issue is the misuse of the government vehicles. Again, like I said, this man was traveling with a fleet of government-owned vehicles to go back to his home and take all these staffers. And one time one of the staffers driving one of these vehicles got into a car accident, and they failed to properly report the car accident the way the government requires them to do when they’re in a government vehicle, which was a violation of ethics laws.

So that is really what kind of started this entire investigation into Brock Long, and now that the investigators have concluded it, they have referred it for potential criminal prosecution. Not just another investigation. They’ve handed it over to the courts and said, “If you want to prosecute this guy, the head of FEMA, go for it.” Now, keep in mind Brock Long is the guy who just the other day told us that the reason the Puerto Rican death toll from Hurricane Maria was so high was because of spousal abuse, not because of the crappy job he did as the director of FEMA. It was all of those men beating the crap out of their wives, or possibly even vice versa. That’s why that death toll was so high. It wasn’t his incompetence. It was because of everybody just wanting to murder each other on the island.

And now we know that his incompetence wasn’t just limited to Puerto Rico. It was actually pretty much his daily routine was incompetence and corruption, so add another one to the list of wholly corrupt and incompetent members of the Trump Administration. Though, to their credit, it’s been reported that the White House was actually wanting to fire Brock Long, but they couldn’t do it last week once all of this kind of blew up, because obviously Hurricane Florence. So they have to suffer through this numb skull, but they are allegedly already looking for his replacement.

Brock Long has done a lot of horrible things, and this story kind of highlights that, but out of all the spending scandals, the car accident scandal that he’s got now, the biggest thing that we have to remember is that this was the guy in charge of FEMA when nearly 3,000 Puerto Ricans died because the government did not give them the aid that they were required to receive. That’s the story of Brock Long. Whatever happens with this investigation or the potential prosecution, good. However, let’s never forget that this was the guy in charge when nearly 3,000 American citizens died because he didn’t feel like doing his job.