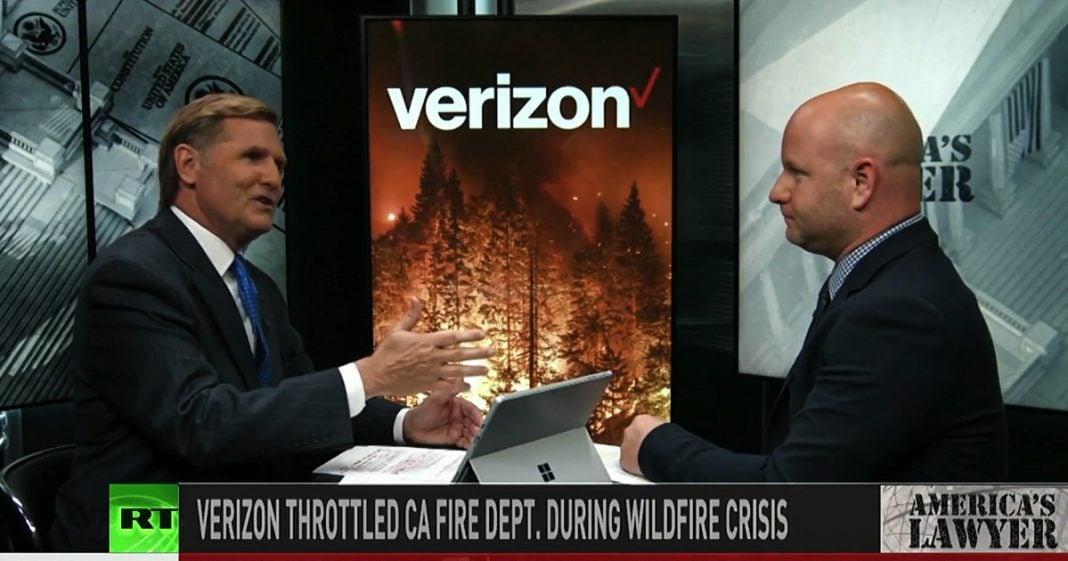 Via America’s Lawyer: It was revealed recently that Verizon was throttling the data of emergency rescue teams who were battling the massive wildfires in California last month. Mike Papantonio is joined by Farron Cousins to discuss.

Mike Papantonio: While we’re on the subject of the internet, it was revealed recently that Verizon was throttling the data of emergency rescue teams who were battling the massive wildfires in California last month. Let me ask you about this topic. This is what we’re talking about when we saw them messing with the internet.

Farron Cousins: Right. They had this emergency response vehicle equipped with Verizon internet service based on their unlimited data plan, that’s what the firefighters out there had, that’s how they kept in touch with one another, let them know where to go, where to be, who to save. They call Verizon tech support because they’re saying, “Our data’s not fast enough. We can’t do our jobs.” The tech support says, “You should buy a better plan. Why don’t you upgrade your plan instead because there’s nothing we can do.”

Now Verizon is trying to argue, because they’re being sued, “That was a customer support mistake. We would never intentionally do that.” But you did.

Mike Papantonio: They said to the firefighting organization, “You’re important. We know California’s burning down. We know you’re trying to save lives, but we’ve got some competitors out there. We have independent businesses that want this time. They want this space, so we’re going to throttle you back.” It’s the Golden Rule, the people with the gold make all the rules; that’s the way Verizon has always looked at it.

Take a look at Verizon’s record. You’ve done stories on it. You’ve written articles in the Trial Lawyer Magazine about it. Verizon is the ugly of the ugliest. Now they’re caught and it’s so bad that they actually, when they ask for comments, they lie. They say, “Well, we made it available.” Well, they made it available telling the firefighters that you’ve got to pay more money, you have to pay to play. Isn’t that what happened here?

Farron Cousins: That is 100% what happened. This is something people need to know about. This is company that millions of people in this country use every single day, and they literally just proved to you that they’re going to put their profits, trying to sell a better data plan, over the lives of these people in California. People died in these fires, and they didn’t care enough to say, “We’re going to unleash your data so you can do your job.” Instead, it was, “Well, if you want to go save that next person, you’re going to have to pony up to the extreme plan.”

Mike Papantonio: This is a perfect test case for the FCC.

Mike Papantonio: This is where you sue the FCC, which is what they’ve done, and you say, “Let me show you the results.” Once you sue the FCC, then you’re able to take discovery, you’re able to take depositions. Tell me who approached you while this was going on, Mr. Pie. Who did you communicate with? They can follow the trail on how the FCC is now owned and operated by big corporations.