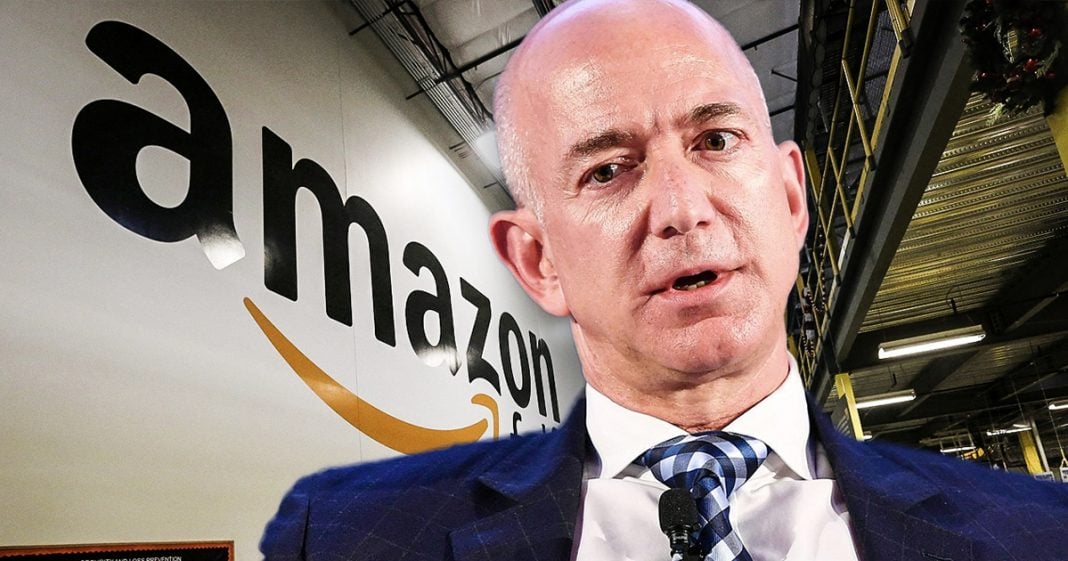 A former Amazon warehouse worker has written an op-ed for The Guardian, where they confirmed that the attacks on the company for their horrendous labor practices are absolutely true. This shows that the company’s practice of hiring online trolls to attack people like Bernie Sanders was just a coverup, and the workers really are suffering as badly as has been reported. Ring of Fire’s Farron Cousins discusses this.

Bernie Sanders has taken a lot of heat mostly from Amazon, but actually some from elected officials as well, for his kind of crusade against Amazon and to protect the workers of that multi-billion dollar company, which the richest man on the planet, Jeff Bezos, happens to own. Well, as it turns out, Bernie Sanders is 100% right, and that is actually coming from former workers at Amazon warehouses. This week there was a new op-ed in the Guardian by a UK Amazon worker. The guy says he went undercover at the Amazon factory for about three weeks just to kind of get a sense of whether or not some of the things being said about the company were true, and it turns out every single thing that has been said about this company with how horrible they treat their workers is absolutely true.

Here are some of the things that this worker described in the three weeks that they were at the company. Let me read these to you, direct from their op-ed here. “This is a workplace environment in which decency, respect and dignity are absent. The atmosphere is what I imagine a low-security prison would feel like. A corporate, Orwellian form of double-speak with pervasive. Near the entrance to the warehouse, a cardboard cut-out of a fictional Amazon worker proclaimed, via a speech bubble attached to her head, that ‘we love coming to work and we miss it when we’re not here.'”

A recent survey found Amazon workers in England, by the group Organize, found that 74% were afraid to go to the toilet during a shift out of fear of missing productivity targets. They were also put on a point system. If you did anything wrong, which means if you clocked in late, if you were chitchatting with a coworker, if you missed productivity goals, if you took too long in the bathroom, you were given a point. If you got to six points, you were fired. And you also get one point if you called in sick. So basically you’re not even allowed to take sick days at some of these Amazon warehouses.

This has to be brought up, because this company is run by the richest human being on the planet, a man that would have to spend $28 million every single day for the rest of his life in order to avoid becoming any wealthier. He could spend $28 million every single day and technically not lose a dime out of the money that he already has in the bank, and we have workers … And yes, this worker in the op-ed also described finding bottles filled with urine because people were too afraid to go to the actual bathroom because they would miss productivity targets, but that’s what we’re dealing with here.

So maybe he should take that $28 million a day to avoid getting wealthier and start paying it to his employees who were working 10 or 11 or 12-hour shifts, not being allowed to take breaks, not being allowed to go to the bathroom, making minimum wage, no benefits, absolutely hellish conditions, no air conditioning. They would walk as many as 24 kilometers per day, roughly 12 miles per day, and treated like garbage, because that’s where workers are to those multi-billionaire CEOs, not just Amazon but all over this country, all over the planet.

These people who run these companies have more money than they could ever hope to spend in their lifetime, and they treat the people who keep it going, who keep it running, keep these companies off the ground, they treat them like absolute garbage, like vermin, like animals. They don’t care if they live or die. They can always replace them with the next low wage worker. There’s always somebody waiting in the wings that’s desperate enough for a job that they would have to take this and suffer through the indignities that this company puts upon the workers.

And at the same time we also have Amazon right now hiring people online to go out there and say good things about working at the company, how great those factories are, those warehouses, how they love everything happening and how Bernie Sanders is such an evil cranky old man. That’s what they’re doing online. They’re paying people to do that, probably paying them more than they’re paying the workers in the warehouses, but this op-ed makes it painfully clear. Bernie Sanders was 100% right in every criticism that he has lobbied against Amazon as well as other companies.