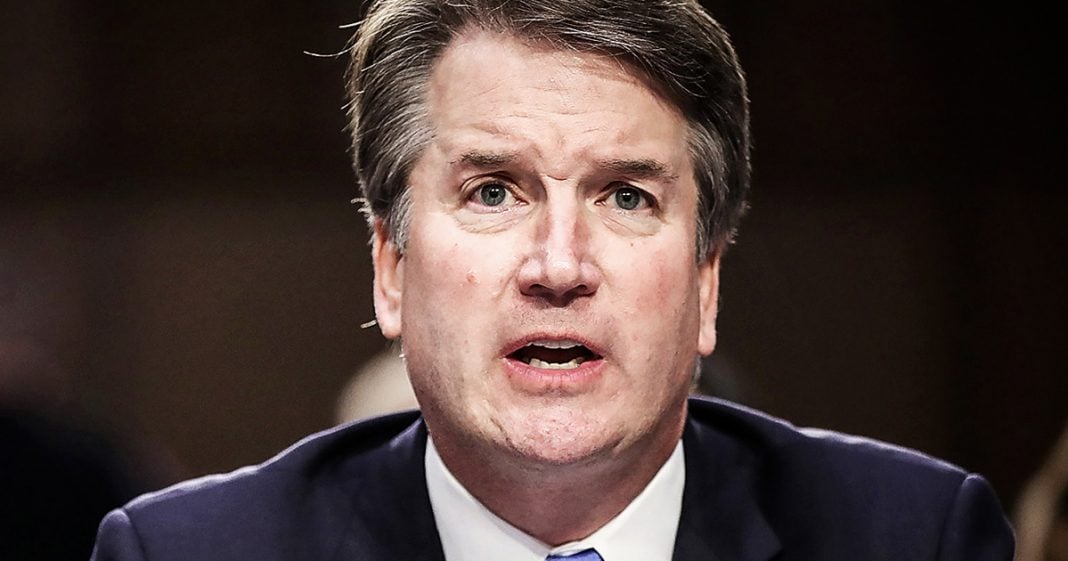 Donald Trump’s SCOTUS nominee Brett Kavanaugh has now been accused of sexually assaulting a woman while he was in high school at a party. The Democrats had received a letter from Christine Blasey Ford earlier this summer detailing the account, which she had told to her therapist and her husband years ago and passed a polygraph test. But don’t think that this means Kavanaugh is going down – if anything, it will just make Republicans confirm him faster, as Ring of Fire’s Farron Cousins explains.

It’s been a very difficult few days for Donald Trump’s supreme court nominee, Brett Kavanaugh with recent revelations that Kavanaugh may have actually sexually assaulted a woman back when he was in high school. The woman had sent an email, or a letter actually, to Diane Feinstein earlier this summer, explaining the situation, telling her what happened. And then recently, just a few days ago, actually came forward and said, “This was me. I wrote the letter, because I want to be the one to tell my story.”

The woman is named Christine Ford, she is a psychology research professor, very credible. She actually told her therapist and her husband about what happened back in 2012. She has taking a polygraph test and passed it while explaining the allegations. And here’s what they are. When she was 17 years old she was at a friend’s house. Kavanaugh, also 17 at the time with his two friends came in, forced her into her a bedroom. Kavanaugh climbed on top of her, began groping her over her clothing, trying to remove her clothing. As well as the bathing suit that she was wearing. Kavanaugh’s friends were watching all of this. She tried to scream. Kavanaugh put his hand over her mouth so that nobody would hear her screaming. She actually said that she was scared that he was going to inadvertently kill her because he was holding her down and her covering her mouth so forcefully. But then once Kavanaugh’s two friends decided that they wanted to join in as well, the three, or four kind of tumbled, fell off the bed. She ran out of there, locked herself in a bathroom until she felt that it was safe. And then fled and left the house.

So those are the new allegations against Brett Kavanaugh. Yes they are 35 year old allegations. But that does not make them any less credible. And given the fact that this woman is a psychology research professor, she has passed a polygraph test, she has told other people that this happened many years ago. This is something that has to be taken seriously. And so for, there aren’t enough Republicans in the Senate who seem to be thinking that this is credible. Or even if it is credible, they don’t seem to think it matters. We have had Republicans over the last few days come out and tell us, “This is just what boys do.”

One of the character witnesses for Brett Kavanaugh, Mark Judge, who actually has spent several years online trying to attack women who come forward with sexual assault allegations against men, says that this is what all 17 year old boys do, right? Because what 17 year old boy hasn’t tried to rape someone? Well, I’ll answer that question for you, because the answer is most of them have not tried to rape someone. And it doesn’t matter if he was 17 or if he was 47, this is the kind of character that this man has. It’s who he is. And for the Supreme Court shouldn’t we ask for the best and the brightest, the most moral, the most outstanding of our society before we give them the lifetime appointment to the federal bench? We have no reason to believe that this woman is making up this story, we don’t.

Now we can question why Diane Feinstein didn’t call her in sooner, or didn’t bring these accusations to the public. But we do know that Republicans were ready and waiting with a list of 65 women who said that, “Hey Kavanaugh’s a good guy. He never tried to rape me. So what’s the matter? What’s the point?” You don’t have a list of 65 women ready to testify or claim that you didn’t rape them, unless you’re expecting to get accused of sexual assault by someone. Which is what happened.

This probably won’t hurt Kavanaugh. And that’s the sick punch line to all of this. He’s probably still going to be rammed through a confirmation. You might have one or two Republicans with enough courage to stand up and stop it. But they’re not going to stop it forever. Christine Ford has said that she is willing to come and testify to the committee, but Republican controlled committee probably not going to do that.

Didn’t stop Clarence Thomas when he was accused of sexual assault. Probably not going to stop Brett Kavanaugh. And I that’s the case, then that means that two of the nine justices on the Supreme Court will basically be sexual predators that we should look out for. That we wouldn’t want anyone to be locked in a room alone with them. And we’ll have two of them on the Supreme Court.