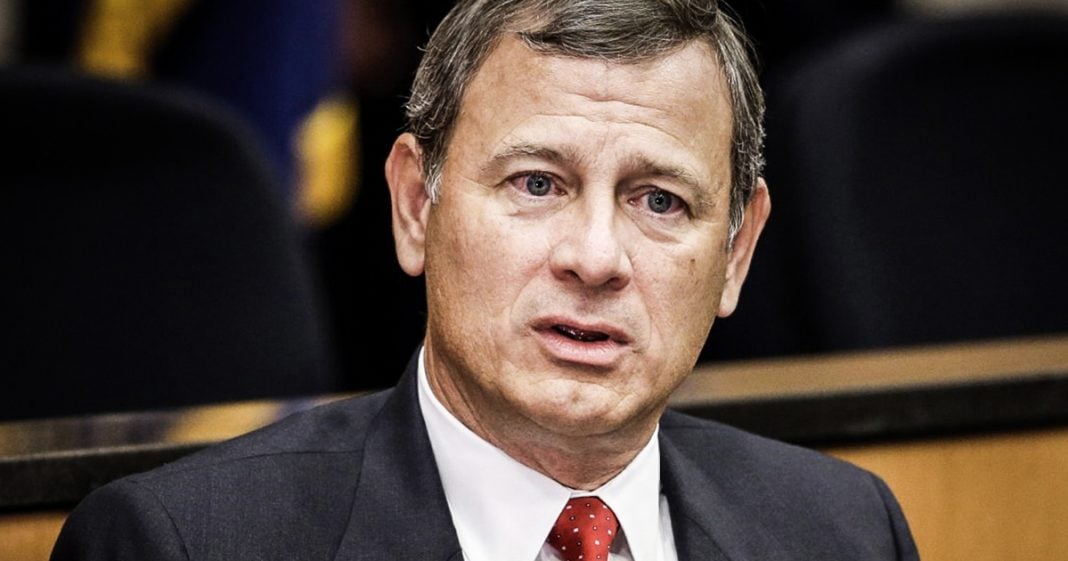 Supreme Court Chief Justice John Roberts has intervened in a legal case that would have helped reveal the dark money funders behind political ads and other political expenditures. Roberts’ intervention now means that these donors will remain secret, even after a judge ruled recently that these donors can be revealed to the public. This is a big win for dark money and a major loss for our Democratic process. Ring of Fire’s Farron Cousins discusses this.

Back in August, a US district judge actually gave us a ruling that said that we the public were finally going to see who these dark money donors are to some of these super packs and these other political spending organizations that accept dark money, go out and fund all these campaigns and these ads and all kinds of other political things. We were finally gonna get to know who they were. And then on Saturday, Supreme Court Chief Justice John Roberts, by his self without consulting the rest of the Supreme Court, decided to intervene. And he issued a stay on that ruling so that now we’re not gonna get to know who these dark money donors are.

Here’s the thing. The ruling from the judge in August was set to take effect today. Today would have been the day that we finally got a little bit of transparency in campaign finance. But because John Roberts, the Republican who controls the Supreme Court, decided to step in and issue a stay on Saturday, now we don’t get to know. We don’t know at this moment whether or not this stay is just temporary or if this is just going to last forever. But what we do know is that it’s probably not going to expire before the mid-terms happen. This was a political move by the Chief Justice of the US Supreme Court that was specifically designed to help republicans. And we know that because the specific case that he had to intervene in was regarding Karl Rove’s Crossroads GPS.

They were the ones who were being sued to try to force them to disclose their donors, because here’s the way the rule works right now. And this is a rule that’s actually been on the books for several decades. It is that you do not have to reveal these dark money donors, that’s why they call them dark money, unless they give you the money and specifically say, “You have to spend it on this.” If they do not specify what it has to be spent on, you do not have to reveal their identities in your filings or in the ads. This court ruling, basically it struck that down. And it said, “No. You know what? If you’re gonna give money, and if you’re gonna influence our political process, we get to know who you are.”

And John Roberts took that away from us on Saturday, because he can’t stand the thought of these people that he allowed all this unlimited political money to come into our elections, and keep in mind he is the Chief Justice who gave us the Citizen’s United and McCutcheon rulings, he doesn’t want republicans to take that big of a hit before the mid-terms or really ever. But that’s what we have sitting at the very top of the highest court in the land, a Republican political corporate hack who will do whatever it takes to make sure that Republican donors and their identities remain a secret from the public.