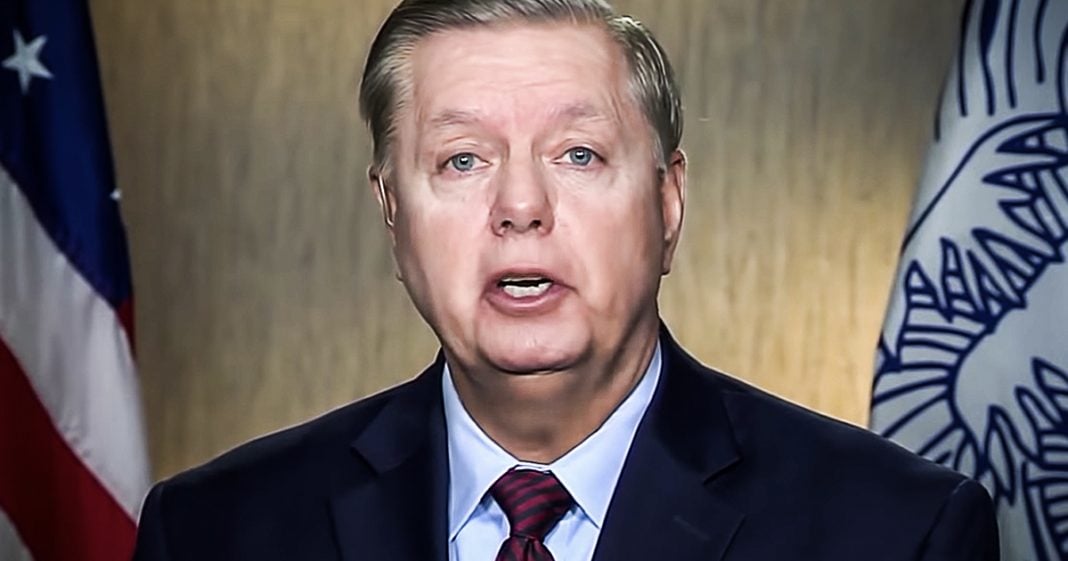 During an interview with Face The Nation this past weekend, Republican Senator Lindsey Graham said that some of the guilty pleas coming from Trump’s friends are for insignificant things like lying to the FBI, which Lindsey Graham says isn’t really that big of an event. That’s a stark contrast to what he said about lying to authorities during the Clinton impeachment hearings, and it shows how desperate Republicans are to protect their lying President and his buddies. Ring of Fire’s Farron Cousins discusses this.

You know most people in this country actually think that what’s going on with the Robert Mueller investigation is a big deal. They think that the guilty pleas or the convictions of some of Donald Trump’s closest friends and campaign aides is a big deal. But you know who doesn’t think it’s a big deal? Lindsey Graham, Republican Senator Lindsey Graham actually went on TV this past weekend, Face The Nation, and he had this to say about the guilty pleas from some of the people that were closest to Trump. “You got to look at the substance of what people plead to. Some people plead to lying to the FBI like George Papadopoulos got two weeks in jail. I don’t see that as a big event. Manafort could have a lot of stuff, or he could just have stuff around financial transactions. I don’t know yet. You don’t look at the numbers.”

I don’t see that as a big event, right? That’s what Lindsey Graham has to say, lying to the FBI, pleading guilty to that, it’s not a big deal. Lying to the FBI, right? It’s just boys being boys, I assume is going to be the next defense we see coming out of the Republicans today. But isn’t that basically the same thing that they impeached Bill Clinton for back in the ’90s? The lying under oath, and Lindsey Graham was one of the loudest voices at the time back then too, pushing for it, because at the time you used to think lying to the FBI, lying to authorities, lying under oath, he thought it was a big deal back then. And it was, just like it still is today.

But it is amazing how these Republicans can twist logic, and reason, and facts, and their own histories in order to defend the president and all of his little buddies that seem to be dropping like flies. Lindsey Graham doesn’t know what Paul Manafort knows. He doesn’t know what he’s already told Robert Mueller, and he doesn’t even know the specifics of the plea deal that was worked at the end of last week. But that hasn’t stopped him from going out there, giving these ridiculous interviews to the media, saying, “I don’t think lying to the FBI’s a big deal.”

And the reason he’s doing that is because he understands that Donald Trump, if he ever has to testify, is most likely going to lie to investigators under oath, which is pretty much what Donald Trump’s own lawyers have said. That’s what Fox News has said is going to happen because gosh darn it, Donald Trump just can’t seem to tell the truth. So why not do what Lindsey Graham does, go out and get ahead of the issue, and just start laying the groundwork that lying to authorities under oath isn’t a big deal because that is exactly what Graham is doing today.

The big question I have, is what do they have on Lindsey Graham, right? This guy started out as one of the loudest anti-Trump voices among the Republican Party, and yet in the span of one year, he turned into one of the biggest Donald Trump suck ups imaginable. I mean, he threw his own friends under the bus and left them in the dust. John McCain, Jeff Sessions, he doesn’t care about those guys anymore, and especially now that McCain is gone, Lindsey Graham is free to not be judged by any of his other buddies by sticking up for Donald Trump and playing golf with him. And now out there, completely forgetting what he was telling us one year ago, and acting like Donald Trump is just a holier than thou saint who even if he does lie to authorities, probably won’t be that big of a deal.