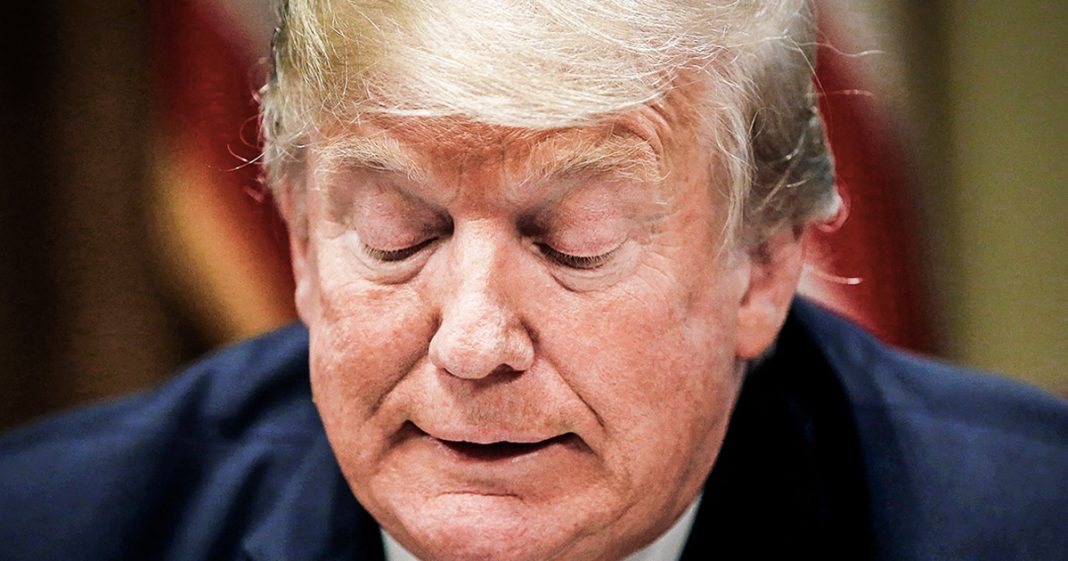 The White House announced this weekend that Donald Trump is preparing to levy an additional $200 billion in tariffs on goods from China. These new tariffs are going to drive prices through the roof for consumers, resulting in a spending freeze that will ripple through the economy. At this point, it almost feels as if Trump is intentionally trying to destroy our economy, as Ring of Fire’s Farron Cousins explains.

Over the weekend, the Trump administration announced that the president is preparing an additional package of 200 billion dollars’ worth of new tariffs on goods coming over from China. Now, Donald Trump and the Republicans always keep telling us how great the economy is doing, and on the surface, yeah, it looks like the economy is doing great. But every credible economist has told us that not only is this a bubble, but that there are many different things that could come along and pop that bubble. One of them is a trade war, which is exactly what Donald Trump is engaging in right now.

We have already had to spend billions of dollars bailing out US farmers. We’ve already seen stores around the country closing their doors because they can’t afford the products from overseas anymore, to bring them over here to the United States to finish the manufacturing process or because they need those products in the manufacturing process. So we’ve lost thousands of jobs, people are suffering, farmers are suffering, we can’t bail everyone out after all, and Trump wants to impose an additional 200 billion dollars’ worth of tariffs on Chinese goods, and this particular tariff package is going to hit every single person in this country.

Here are just some of the items that will be taxed to hell and back under Trump’s new proposal here. Refrigerators, air conditioners, furniture, televisions, toys, more than one thousand different everyday consumer products. One thousand. Oh, and keep in mind, we’re also coming up on the holiday shopping season, so pretty much anything that you might be shopping for to get your loved ones or your children or whoever it may be, yeah, the price on that is about to go through the roof because the president seems to be intentionally trying to tank the economy. Honestly, that’s one of the only conclusions you can come to at this point.

Donald Trump knows the trade wars don’t benefit anyone. He knows that it’s going to drive prices up for consumers, which means there’s going to be a spending shrink, or a spending freeze altogether, but he’s doing it anyway because he wants to prove a point to China, that he’s the biggest, baddest guy there is to deal with. So what are they going to do? They’re going to do the same thing. They’ve done it every single time. Every time he imposes a new tariff on them, they put a new one on us, because they can. Donald Trump has to understand that in some areas, especially economically speaking, because of the way this country has gone to hell under capitalism in the last 30 years, we’re not the biggest, baddest, bestest economy in the world anymore. Right?

We rely on all these other countries, not just for the goods they produce, but sometimes they actually produce goods that are necessary for our manufacturing processes, and if we can’t get those, we can’t even make some of the goods we make at home at home. Trump doesn’t seem to understand that. There are some members of his administration who understand it and they’ve tried to talk him out of it, but he doesn’t want to listen because he thinks he’s smarter than everyone else. He is the dumbest person in that White House today, and that is a White House that actually includes Jared Kushner, but Trump by far is the dumbest. And if I didn’t know any better, I’d swear that he was trying to intentionally tank the US economy just so that he could probably blame it on the Democrats in the future.