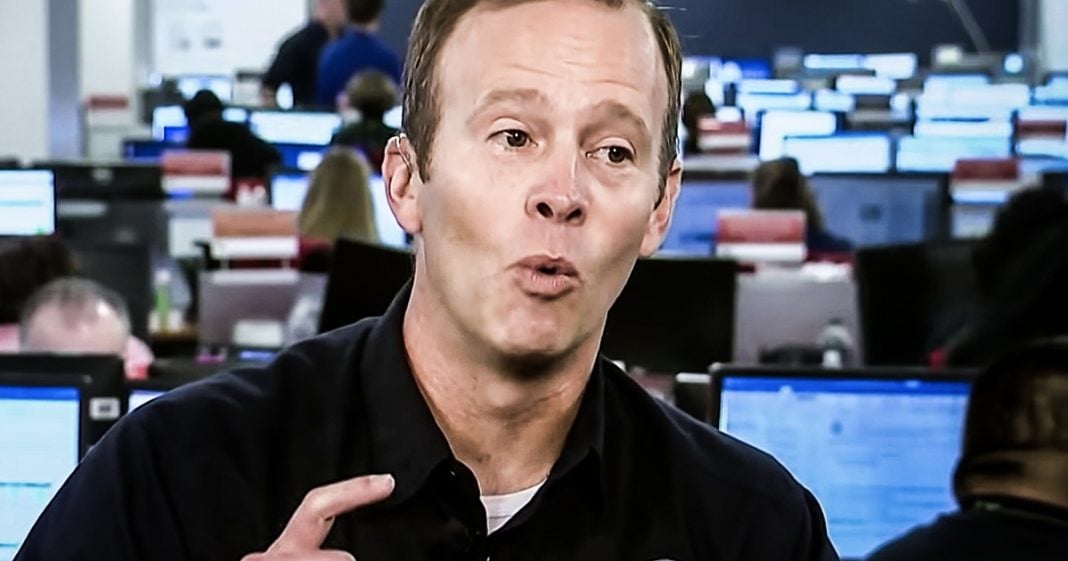 Brock Long, the leader of FEMA, is out there trying to downplay the official death toll from Hurricane Maria in Puerto Rico, and during an interview on Meet The Press this past weekend he actually said that spousal abuse is probably why the death toll went way up in the weeks and months after the hurricane hit the island. This administration will do anything to avoid having to admit that they failed, as Ring of Fire’s Farron Cousins explains.

The Trump administration is still trying to maintain that all of the deaths that happened during, and in the months after, Hurricane Maria down in Puerto Rico, those deaths were not the fault of the Trump administration’s response to the disaster. Brock Long, the administrator of FEMA actually went on Meet the Press this weekend, and he blamed the additional deaths … You know, it went up from 64 to almost 3000. He blamed them on spousal abuse. Here’s his exact quote that he said on Meet the Press. He said, “You might see more deaths indirectly, as time goes on. Spousal abuse goes through the roof. You can’t blame spousal abuse after a disaster on anyone.”

You actually can. You can blame it on the spouse doing the abuse, but so are you telling me, Brock Long, that after hurricane Maria hit, and there were 64 people that died in the storm, that more than 2900 people were murdered by their spouses in the next few months? Don’t you think we would have heard something on the news about this massive epidemic of spousal abuse and spousal murder happening in a U.S. territory? I mean, three people get killed in Chicago and Fox News talks about it for a month. I would think several thousand people getting murdered by their spouses in Puerto Rico, over the span of a few months, would have been headline news for someone. Certainly, some of the independent aid organizations and celebrities who went down there, don’t you think they would have said something like, “Wow, a lot of spouses are getting killed down here. Why aren’t we doing something about it?”

Now, to his credit, Brock Long’s not completely wrong. Yeah, spousal abuse, things like that, do increase after a natural disaster. It’s the stress that goes along with it that leads to things like that. But, it certainly doesn’t account for an additional 2900 people dead. Brock Long, right here, is trying to, once again, do what Donald Trump did and misdirect the public. It wasn’t our failure that led to these deaths. It wasn’t those truckloads of bottled water that we didn’t tell anybody about. That wasn’t our fault. No. It was. It was your fault, Brock Long. It was your fault, Kirstjen Nielsen at Homeland Security, and it was your fault, Donald Trump. That island was under your protection as a U.S. territory, and those people as U.S. citizens. They are your responsibility. What happens to them, the relief efforts, that’s all on you. You failed them.

You can twist logic all you want, trying to say that this was spousal abuse or this was just a bunch of people had unfortunate accidents after the storm. But, you all know. You just won’t admit it publicly, that all of you are responsible for those deaths because of your completely inept and disgusting response to Hurricane Maria in Puerto Rico.