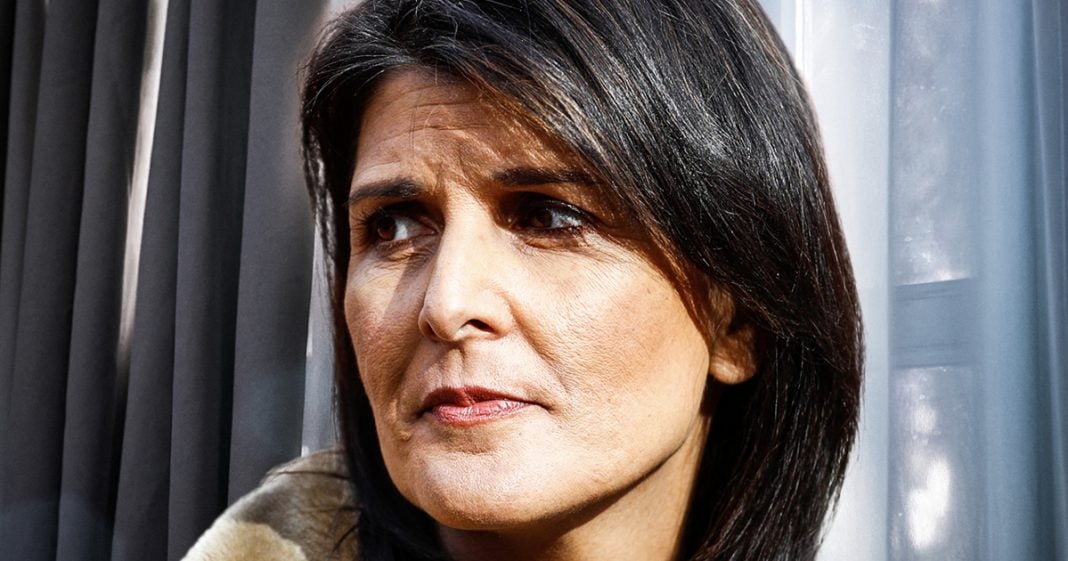 The spending scandals from the Trump administration just never seem to stop. This week it was revealed that Nikki Haley, Donald Trump’s UN ambassador, has spent $52,000 of taxpayers’ money on curtains for her luxury apartment in New York. This money could have been spent on literally anything else and that would have been a better deal, but this administration seems to believe that the taxpayer funds they collect each year are just their play money that they can do anything with. Ring of Fire’s Farron Cousins discusses this.

Members of the Trump administration seem to think that the public coffers, where all the tax money from us US tax payers go, that it’s just their personal fun money to do with whatever they want. We saw it from Scott Pruitt. We saw it from Ben Carson. We’ve seen it from Betsy DeVos. We’ve seen it from Zinke and Mnuchin, everybody in this administration just seems to think that they don’t have to follow the rules and they can spend whatever they want regardless of the consequences and this week, we got another one of those absurd spending stories. But this time, it involved UN ambassador Nikki Haley. It turns out that Nikki Haley on her luxury penthouse in New York City spent $52,000 of state department money, tax payer money on curtains. $52,000 on curtains. Now about half of that money, almost half of it wasn’t for the actual curtains, but for the electronic mechanisms to make them open and close automatically. 22,000 of it was for those little electronic mechanisms, almost 30,000 was for the curtains themselves. Now, Nikki Haley, again, she lives in this luxury apartment. It’s on First Avenue.

It’s right across the street from the United Nations. I guess technically you could argue that makes sense. We are paying $58,000 a month for her to live there. So I hope it’s convenient for her. But this administration has to be stopped. This is absolute and utter insanity. Republicans, the voters, the goddam Tea Party Movement came out in force anytime the Obama administration spent a dollar on anything, including things that were actually helpful for people in this country. Yet, we’re paying $58,000 for Nikki Haley to live in a luxury penthouse on First Avenue on New York, spending $52,000 on curtains, Ben Carson spending $32,000 on plates and silverware, Scott Pruitt spending over $40,000 on a soundproof phone booth so we can’t find out what he’s saying in conversations to lobbyists, Mnuchin taking a government jet to sit on the top of Fort Knox to watch the eclipse. If you don’t think this is insane, then there’s something wrong with you as well. The government can’t function like this. We have almost 40 million people in this country living in poverty. We just gave a massive tax cut to the top 1%.

So to pay for that, we’ve gotta cut Medicaid, Medicare, social security, fire department budgets, teacher budgets, every budget, FEMA budget. We’re taking money from FEMA at a time when we need them the most and this administration, the idiots that Trump has stacked his cabinet with, don’t care that we don’t have very much money. They’re trying to take it all, use it to make their offices or their government paid for apartments, just a little bit nicer. Meanwhile, 40 million Americans wake up every day, not even knowing if they’re gonna be able to eat today. So enjoy your $52,000 curtains in your $58,000 a month apartment, Nikki Haley, that US tax payers are paying for. We’ll continue going about our daily lives working our jobs and paying our taxes so that you can sit in the lap of luxury while we struggle to afford basic prescriptions to help keep our families alive and healthy. I hope you understand and everybody else in the Trump administration understands how disgusting and despicable that these spending scandals truly are.

These are the talking points that Democrats need to be using on the campaign trail because Donald Trump did not come into DC and drain the swamp. He made it bigger than it’s ever been before. But yet, at least he dressed it up with $52,000 curtains.