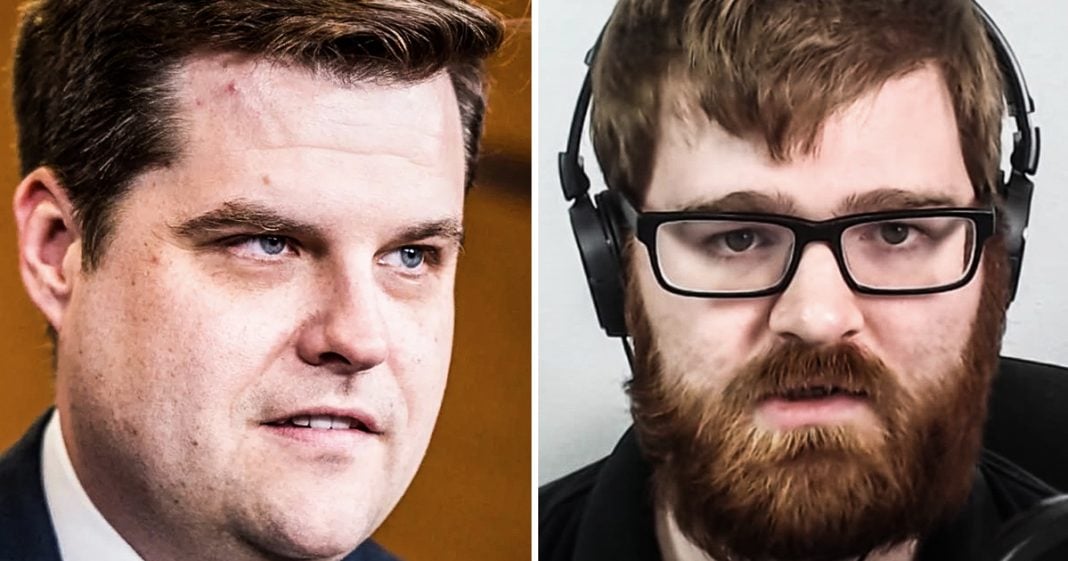 Republican Congressman Matt Gaetz from Florida really seems to enjoy hanging out with really bad people, especially Chuck Johnson, an Alt Right Holocaust denier. In January, Gaetz invited Johnson to the State of the Union address as his personal guest, and now reports have surfaced saying that the two were awfully chummy while on a yacht in California this summer. This is no longer an accident for Gaetz – it is who he is, as Ring of Fire’s Farron Cousins explains.

You know? There’s a lot of Republican candidates who have some problems as we head in to this year’s midterms. Not only do we have actual Republican candidates running for office who are admitted white supremacists, or Holocaust deniers. We also have current sitting members of congress, including my idiot congressman Matt Gaetz, and California congressman Dana Rohrabacher, who have repeatedly been paling around with a Holocaust denier by the name of Chuck Johnson.

Now, this is the guy, Chuck Johnson, that Matt Gaetz brought to the State of the Union back in January. And he is a self-admitted Holocaust denier, who at one point, also tried to raise money so that he could “take out” one of the Black Lives Matter movement leaders. And Matt Gaetz saw nothing wrong with inviting this guy to the State of the Union. Gates actually tried to write this off saying like, “Oh, no. No. No. He was in my office. He saw the invitation and I didn’t know anything about him.” But then, he had said during a Fox business interview that, “He’s not a Holocaust denier. He’s not racist. He’s a good, good guy.”

Well then after that, this past summer, he was seen on a yacht with this same Holocaust denying Chuck Johnson in California, along with Dana Rohrabacher, Rohrabacher was also present with Chuck Johnson at a private meeting a while back with Rand Paul. But the three of them were together for a fundraiser being held for Matt Gaetz, from the first district of Florida, all the way out on California on a yacht with this Holocaust denier.

You see, Republicans don’t understand that people do judge you by the company that you keep. And if you keep paling around with people who think the Holocaust didn’t happen, or people who think that we should go out and murder Black Lives Matter leaders, then yeah, that speaks volumes to your personal character. You know, you can write it off and try to excuse it if it happens one time and then never happens again. But when you’re seen with this person on multiple occasions, it becomes your pattern of behavior. Something that prosecutors look for when trying to prosecute somebody for a crime. It’s something judges consider during a sentencing, is there a pattern of behavior? And in the case of Matt Gaetz and Dana Rohrabacher, hell yeah. This guy is their friend. You don’t get caught hanging out with somebody multiple times if you didn’t know anything about them, no. That’s not how it works.

This is a guy that Matt Gaetz has defended on Fox News. A guy the Rohrabacher defends. And he is absolutely some of the worst scum of the Earth. But that is perfectly fine for people like Gaetz and Rohrabacher, because they don’t care who they pal around with or what that crazy person happens to believe as long as they think that it’s somehow going to benefit their campaigns. And unfortunately, giving the districts the Matt Gaetz and Rohrabacher represent, this may actually be something that helps their campaigns, because that’s just how sick and twisted this country has become.