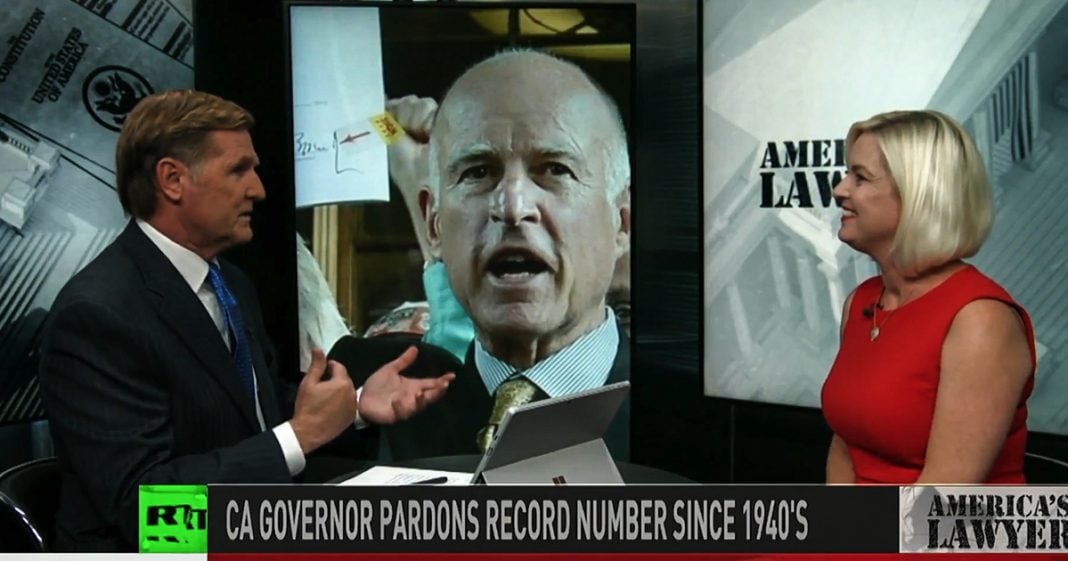 Via America’s Lawyer: Governor Jerry Brown has commuted the life sentences of 20 murderers and has handed out more than 1,000 pardons. Mollye Barrows joins Mike Papantonio to discuss.

Mike Papantonio: With four months left in office, California’s longest serving governor is granting forgiveness to a record number of criminals. Governor Jerry Brown has commuted the life sentences of 20 murderers and has handed out more than 1,000 pardons. Joining me to talk about this is legal journalist for The Trial Lawyer Magazine, Mollye Barrows.

Mollye, you know, get ready if you’re living in California, your neighborhood’s going to … I mean, his record … We’re talking about-

Mike Papantonio: Are these new voters? Is that kind of what’s happening?

Mollye Barrows: Perhaps. I think there’s a lot of speculation about what he’s doing, why he’s doing this. But he is. He’s setting them free in record numbers. To a great extent, it might be because of the 2011 Supreme Court decision that said overcrowded prisons are a cruel and unusual punishment. So, California responded to that. Then in recent years, they’ve reduced that population by about 25%. He’s probably, to a certain extent, riding the wave of this, but he’s taking a lot of criticism. People are say that he’s being lenient, he’s being soft on crime. But according to Jerry Brown, that’s not the case at all. This isn’t about leniency. It’s about humanity. It’s about giving people hope.

Mike Papantonio: Yeah. Unless you’re living in a neighborhood where you’re saying, “Okay, they’re coming here.” These are big numbers.

Mike Papantonio: I mean, this is not … The numbers compared to other states, it’s just off the chart.

Mollye Barrows: It is. But what’s so interesting about it, and he brings up a good point, is that in the 1970s, someone who was convicted of first degree murder tended to be sentenced to about a decade in prison. Now, you have someone that’s sentenced to first degree murder, and obviously we have a variety of reasons why people would murder, but still, a first degree murder sentence now gets you at least 50 years, most likely a life sentence, without the possibility of parole in some cases. I think what you’re seeing is two sides of the sentencing fence arguing with what is proper when it comes to punishment. You have some folks that just want to see people punished. If they lost a loved one, they just want them to spend the rest of their lives in prison. Then you have other folks saying, well, it’s about money and it’s about fairness.

Mike Papantonio: Those things are always at odds. You have the two sides of that saying, well, you’ve got the victim’s rights advocates that have got to be livid about this. What are they doing? How vocal are they? What does this mean for the next governor taking over? Is this part of the platform? That I won’t let all of these people go?

Mollye Barrows: It will be interesting because to a great extent, I think people see this as Governor Brown and a number of California lawmakers riding the wave of the heck with you, Trump, and all your policies that you’re imposing on us, whether it’s about immigration, or it’s about the environment. Even when it comes to sentencing, although Donald Trump has weighed in and said in the months coming and next year, he’s going to do more to be … address leniency, if you will. Not leniency, but making sure that prisoners aren’t … It’s become so expensive to house them and incarcerate people, he wanted to take a look at it. But at any rate, I think that this is going … Whoever comes in and takes Jerry Brown’s place, I think that they’re going to have a … be surrounded by a number of lawmakers who already support this direction and where it’s going.

Mike Papantonio: A, you have not shown reform here, Jerry Brown. You’re not saying, “I’m letting these people go because of reform.” You’re ignoring the idea of retribution. When you look at criminal justice, that part of it, those are two factors that come into play.

Mike Papantonio: I can’t help but think in the next big race, that this is going to be a dividing line. When somebody says, “Hey, this is Jerry. This is … ” You know, he’s always been regarded as kind of a nut. I mean, you know, except in California.

Mike Papantonio: … this oddball governor out in California. This may be his … Is this just his personal philosophy or do you think there’s some design behind, beyond this is just a statement of who we are in California? How do you-

Mollye Barrows: Some of everything perhaps, because he is … I guess he was a Jesuit seminarian at one point and they believe that perhaps some of his personal beliefs about rehabilitation and hope have come into this. He’s openly said he wants to give prisoners hope, that it is about rehabilitation, and if they have shown signs of rehabilitation, they should be allowed to get out. It’s also cost-effective to not keep people in prison for the rest of their lives, no matter how much retribution may be wanted or desired. If someone has shown genuinely that they have reformed, then it’s less expensive for them to go out and make their way in the world than it is to keep them.

Mike Papantonio: Yeah. If it’s your loved one that’s been murdered-

Mollye Barrows: Correct. You don’t give a crap about any of that.

Mike Papantonio: … you really don’t care are they reformed.

Mike Papantonio: You don’t care about the money you save. This is a justice system that should work for everybody. Mollye, thank you for joining me.

Mike Papantonio: This is a story … I’m interested to know how this thing lands in the primaries.