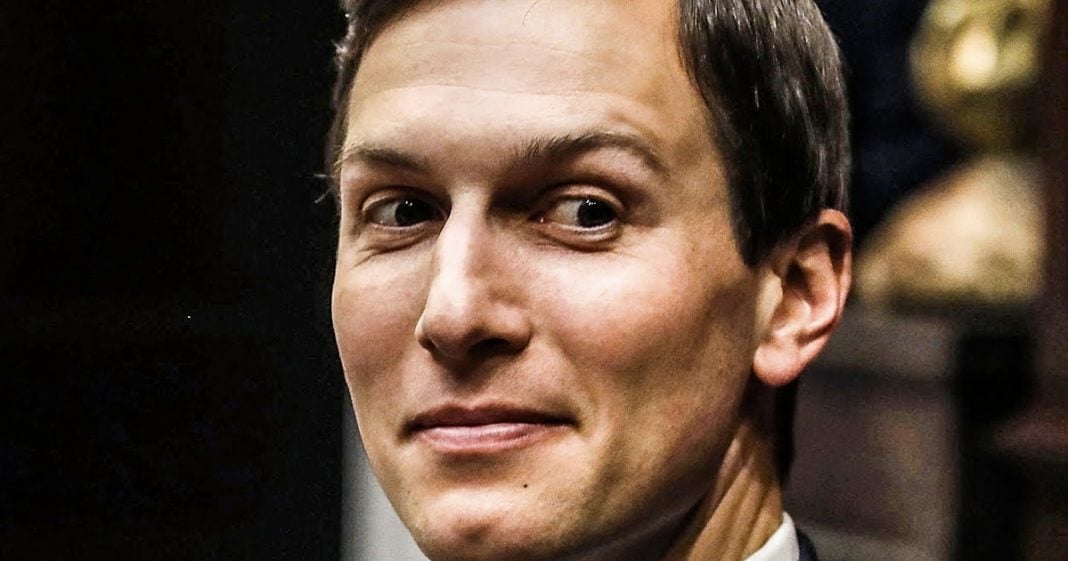 Jared Kushner has apparently told a prominent New York Times reporter that she needs to write more positive stories about Donald Trump in order to get back on his good side, and possibly gain access to the President in the future. The entire Trump family tree, including his in-laws like Kushner, obviously have no idea how the media works, and Trump seems to think that everyone in this country works for him and that we should all be spineless yes-men. Ring of Fire’s Farron Cousins discusses this.

Jared Kushner, son-in-law of Donald Trump and a senior White House advisor for some reason, recently gave some advice to New York Times columnist Maureen Dowd, and that advice was, “Maybe you should write one or two nice articles about Donald Trump so that you can get back on his good side.” These comments were allegedly made by Kushner to Dowd recently when Kushner was being interviewed for the Australian Financial Times … Excuse me … Australian Financial Review. Makes sense, right? That is exactly what you would expect Jared Kushner to say to a columnist, a reporter, a journalist. “Hey. If you’re just nice to the guy for a little bit, maybe he’ll be nicer to you. Maybe you can get access. Maybe you could do an interview.” Kushner also allegedly said, “Maybe throw out a nice tweet or two about the president.”

Now, the reason Kushner even had to say this to Dowd is because Donald Trump absolutely hates Maureen Dowd because when he was campaigning, she dared to criticize him because … or she called him a hypocrite, actually, because Donald Trump called out Bill Clinton’s infidelity even though Trump’s own infidelity was something that everybody in this country already knew about. Yet, somehow he acted like it was only wrong when Bill Clinton did it. That is why Donald Trump hates Maureen Dowd. In fact, at the time, a couple years ago, these were some of the tweets Trump sent out: “Wacky @NYTimesDowd, who hardly knows me, makes up things that I never said for her boring interviews and column, a neurotic dope.” He also said, “Crazy Maureen Dowd, the wacky columnist for the failing @NYTimes, pretends she knows me well. Wrong.”

According to Jared Kushner, the way to undo this damage is to write a nice column about him. Maybe a tweet. Maybe tag him in it. #MAGA. No. See, the entire Trump family tree, which includes his in-law Jared Kushner, they don’t seem to understand how the media is supposed to work in this country. It is not the job of any media outlet, even that of Fox News, to just sit there and fawn over the president of the United States all day long, every day of the week. That is nobody’s job in this country to do that. Yet, they think it is.

Trump, for his entire life, has surrounded himself with spineless yes-men and yes-women who refuse to ever say anything bad or negative or contradictory to him, and now that he’s in a position of power, he can’t stand it that he can’t control them. He can’t strike fear in their hearts or threaten to fire them, so they’re free to criticize him as they’re supposed to be doing. They’re holding him accountable, or at least trying to, with the exception, of course, of Fox.

But that’s how the media is supposed to work. You report on what happened, and you let the public make up their own minds. We know that Donald Trump has been unfaithful to every wife he’s ever had. That’s not news. That doesn’t necessarily even affect his ability to be the president. It’s just a fact, and if he wants to get pissy about that, and then Kushner demand that Maureen Dowd write positive articles to get back on his good side, it’s not worth it.

What we need is a press that is completely independent and uninfluenced by the federal government. I mean, it’s the only industry actually talked about in the Bill of Rights, in the US Constitution. They mention the press because they understand how essential it is, and Jared Kushner out there trying to influence them to get them to say positive things about Trump, allegedly, so that they can get back on his good side is absolutely disgusting, but it’s exactly what we’ve come to expect from everyone in the Trump family.