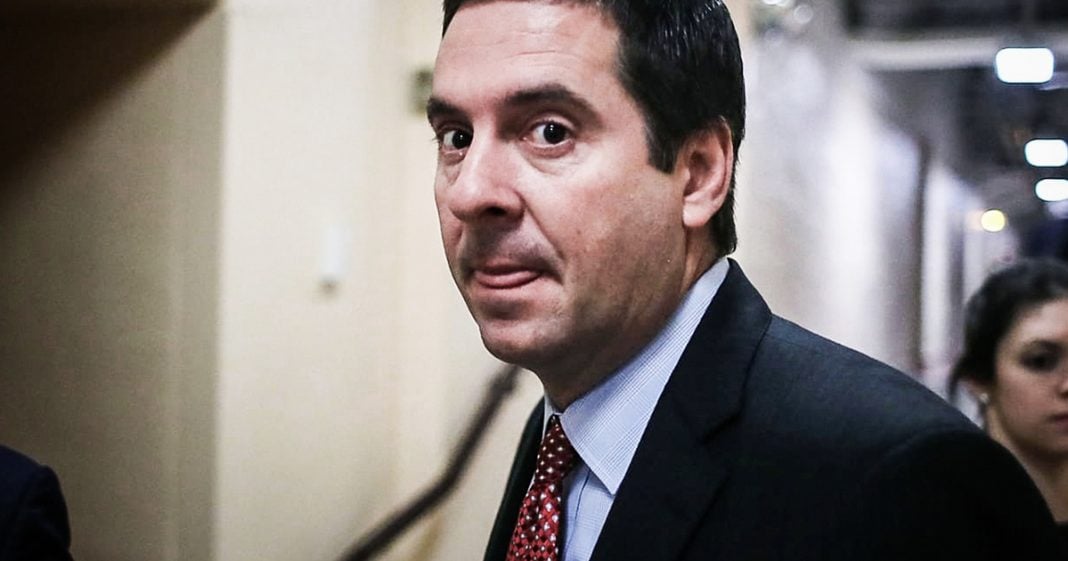 Embattled Republican Congressman Devin Nunes has been dipping into his campaign funds for all kinds of things, but this past weekend it was revealed that Nunes is using his campaign funds to pay for his new science-denying podcast. There’s a chance that this not exactly legal, but that hasn’t stopped Nunes in the past, as Ring of Fire’s Farron Cousins explains.

Republican Congressman Devin Nunes, from the state of California, a state that if you haven’t been paying attention was on fire for several weeks recently, has started a new podcast. In his podcast, he devoted at least his very first episode to denying science. He brought on Dr. Bruce Thornton, a noted climate change denier, where the two of them laughed and joked about the fact that climate change played absolutely no role in the California wildfires because climate change doesn’t exist. Nunes has, for a very long time, been a science denier, saying that climate change is a hoax. It’s a bunch of phooey. There’s no science behind it whatsoever, and he was able to find one of these industry-friendly scientists willing to come on his show and say the exact same thing.

Now, Republicans out there spreading misinformation about climate change is nothing new. Even ones who represent districts that are being ravaged by climate change, like Devin Nunes, still nothing new about that. What is interesting about this, though, is that he’s paying for his new, little podcast project with his campaign funds. Now, over the last few weeks, stories have emerged showing that Devin Nunes has been more and more dipping into his campaign funds to pay for lavish trips for him and his friends all around the state of California, over to Las Vegas, and even some places in the Northeast. Those expenses are likely illegal as they have nothing to do with campaigning whatsoever. The podcast thing, on the other hand, I don’t know that that would even be considered possibly illegal because you could easily argue that starting a podcast is a great way to reach your voters and talk about the issues and educate them as part of your campaign.

So, I don’t think Nunes is in any trouble there, but it does basically send up a lot of red flags for a guy who already has many red flags popping out in his entire campaign finance portfolio. Nunes has been a bad guy for quite some time now, and not just for what he’s doing with the president, trying to feed him information from inside the House of Representatives, something that the constituents in his area are pretty angry about, and Nunes is facing a tough re-election race there. But the misuse of campaign funds is something that we used to, as a country, take seriously, and now Devin Nunes, with at least three different reports showing that he misused campaign funds for these personal trips where he didn’t do any campaigning, nobody seems to care. We’re just going to let it go, and now he’s dipping in even further into those campaign funds to start a podcast to sit there and tell his own constituents, who are living through climate change, that what they’re seeing isn’t real.

This is absolutely despicable. Whether or not the mysteries of campaign funds applies to that podcast, can we at least all agree that him telling the people who voted for him that the fires that just ravaged their state had nothing to do with climate change? Can’t we all agree that that’s a little bit disgusting at this point? People like Nunes are why this country lags so far behind the rest of the planet on the issue of climate change and environmental protection. As long as people like him remain in power, we will never see any meaningful action on that issue. My hope is that if the voters in California don’t get rid of Nunes, then maybe some of those other campaign finance issues, the misuse of campaign funds, maybe those will be enough to kick Nunes out of office.