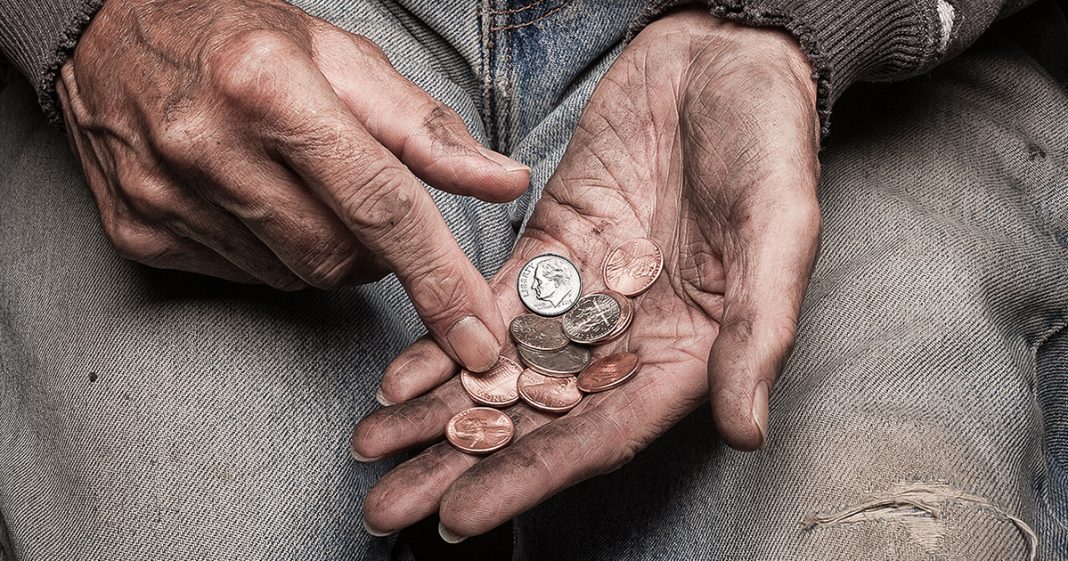 Republicans keep touting how strong the economy is, and the Trump administration has actually made the claim that extreme poverty in the United States doesn’t even exist, but all of these talking points are 100% false. The economy is doing great for the top 1%, but everyone else continues to struggle. A new report shows that poverty in the US has nearly hit the 40 million mark, putting it right back to where it was before the economy came crashing down. Ring of Fire’s Farron Cousins discusses this.

Well, according to a new report that came out this week, we’ve got the poverty numbers for 2017 now. They’re awful. According to the data, nearly 40 million people in the United States were living in poverty in 2017. Poverty by this measure is defined as anyone who struggles to pay for the bare necessities to live in the United States. Meaning these people cannot, in most instances, pay for the bare necessities, food, water, electricity, and shelter. They can’t afford those things.

Most of them are working, some of them, most of them actually relying on government assistance. Government assistance, by the way, that’s about to be cut by the Republican’s proposed budget because they’ve got to continue funding that tax break for the wealthy elite, so that they can go write off the expenses of all their private jets, which yes, that is actually a thing written into the tax law. You get to write-off 100% of the cost of your private jet. Meanwhile we have to take Medicaid, Medicare, social security away from the 40 million people in this country living in poverty.

11.3% right now is the poverty rate in the United States, and yes, it’s been coming down slightly. It hit a high of a little over 15% during the great recession. But we’re right back at that number that we were at before the great recession and the economic collapse hit. If that number ticks a little bit higher, it’s going to have gross negative effects across the United States economy, because as we’ve discussed in the past, anytime a group of people in an area have less money to spend, it impacts every business within that area, which then results in them having less money to spend and so on and so forth.

Less money, less spending equals economic contraction. That’s what we’re looking at in this country today, because we have an administration, and a Republican party that pretend that poverty doesn’t exist, that these people aren’t real, that the economy is doing great. You know what? It is doing great if you’re in the top 1%. Even though Republicans tell us that wages are actually increasing, the data shows the exact opposite. Wages have fallen in the last 12 months. Inflation has gone up by over 2% in the last 12 months. So ours buying power has decreased overall by 3%.

Poverty is getting worse. Here’s a little disgusting statistic for you. Child poverty rate in the United States is actually climbing, we’re at 17.5% child poverty. For children, living in a single-mother household, the poverty rate is 50%. 50% in a single-mother household. 50% of the single moms in this country living in poverty, and yet this administration tells us that they don’t actually exist. Republicans tell us the economy is humming along just fine, meanwhile people have to choose whether or not to refill their prescriptions or go buy food for their family for that day. That’s the real country that we live in.

Not the glitzy glamorous one of private jets and people like Betsy DeVos owning ten different yachts, that’s not America, that’s the fantasy. The reality is the single mother working two jobs, sometimes more than that, and still not having enough money to take care of her family because the corporation that she works for, that greedy CEO wants to keep it all to themselves so they can buy the private jets, and the yachts, and the mansions, and all of that, while screwing over their workers at every opportunity.

We could fix poverty in this country if we actually wanted to. But that’s the catch, we have to actually want to. Right now, with Republicans in charge, that’s not even something that they would ever consider.