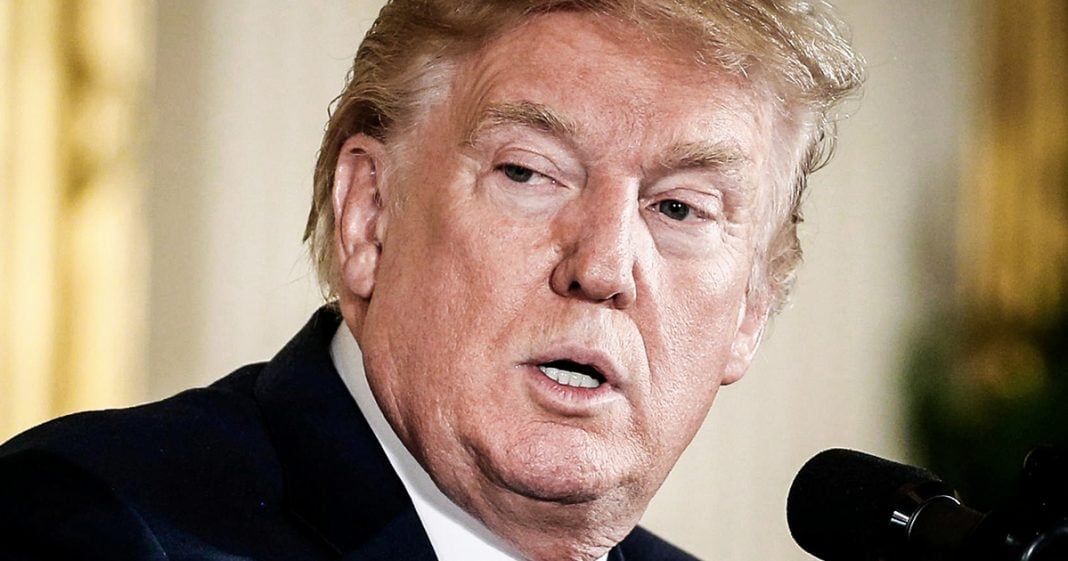 According to new reports, Donald Trump is still freaking out over the New York Times op-ed from a White House staffer that ran last week, and he’s been staying up all night obsessing about who the author could be. As of now, the administration has not been able to find who wrote the article, and the longer it takes them, the more unhinged Trump becomes. Ring of Fire’s Farron Cousins discusses this.

According to a new report by Vanity Fair’s Gabriel Sherman who has multiple sources within the White House, Donald Trump is still freaked out and obsessed with last week’s New York Times op-ed written by an anonymous White House staffer. See, ever since that op-ed came out, Donald Trump has been ranting and raving like a madman, trying to figure out who in his administration would do such a thing.

He has called on Jeff Sessions to investigate it. According to other reports he’s kind of isolated himself. He’s not talking to anybody because he doesn’t know who he can trust, but when he is talking to people he’s trying to rule out who may have been the author of the op-ed. It is driving him absolutely nuts according to sources within the White House. Those are the words they used. They used freaked out, obsessed and according to Don, Jr. himself, he’s actually worried that his father’s not sleeping anymore because he’s staying up all night worrying about who wrote the op-ed.

The biggest issue with this op-ed, and this is the one that Trump is annoying, is not the fact that it was written, it’s the fact that some other people, not Donald Trump, are trying to run the government. That’s what Trump needs to be concerned about. The fact that he’s so dangerously incompetent that we have these non elected people who feel it’s their responsibility to step in and prevent him from doing horrible things.

He’s not worried about the content. He’s worried about who said it, and I think we need to understand that very clear distinction. He was mad at first about what was said in it, but he spent so little time trying to refute any of it, and instead focusing on the identify of the author, that it almost lends more credence to what is said in that op-ed.

But again, everything about this whole situation is absolutely bonkers at this point. If White House Staff really are taking things off the President’s desk and switching them out with other papers, trying to distract him or taking stuff so he can’t see it and understand it, that’s a big deal. Not just because of how crazy the President is, but we also have these unelected people who have become the defacto leaders of our government, and that is also dangerous. They’re not leading a resistance. They said they agree with most of what Trump’s done, the deregulation, the immigration crackdown, all of that. They support all of these horrible right wing policies. They just don’t like the craziness that comes along with Donald Trump.

These are still dangerous people. They’re not part of the resistance as they claimed in the op-ed, but the only silver lining on this is that it’s making Donald Trump go even crazier than usual. Hopefully, as time ticks on, he’ll find out who the author is.

I think we should know. I think he should find out. And I hope that it is somebody very close to him, and that he understands that no matter how much you threaten people, how much you try to keep them close to you and control them, you can never actually take away somebody’s own free will.

At this point I’m going for personal. I hope that it hurts him personally when he finally discovers the identity of whoever it is wrote that op-ed.

Yeah, maybe that’s a little sadistic. Maybe it’s a little immature, but at this point all the damage that this man has caused to this country, the lives he’s destroyed with his immigration policies and his deregulation and all of that. Yeah, I think it’s fair to say that I don’t care if he finds out who it is and it hurts his feelings or makes him never want to trust anyone ever again. Because at this point, that’s what that guy deserves.