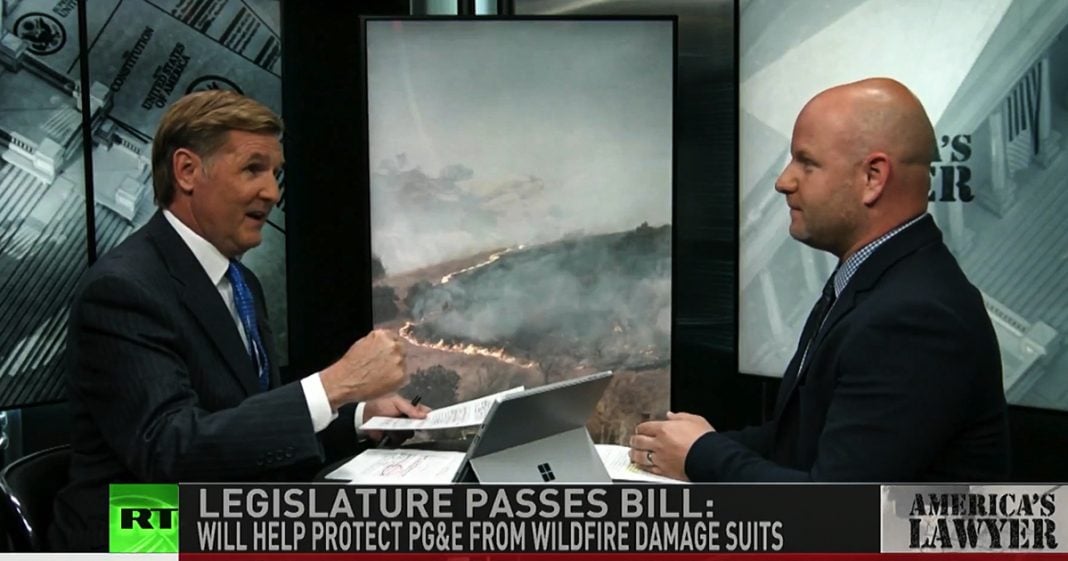 Via America’s Lawyer: The state of California has passed legislation that would shift the cost of wildfires from the companies that were responsible to none other than the California taxpayers. Mike Papantonio and Trial Magazine Editor Farron Cousins discuss.

Mike Papantonio: And in other bad news I suppose from California, the state has passed legislation that would shift the cost, now follow me on this, shift the cost of wildfires from the companies that were responsible, that caused the blaze, admittedly caused California to burn down, they’re going to shift that from those people responsible to none other than the California taxpayers. What’s your take?

Farron Cousins: This legislation that was passed, what they’re doing is they’re trying to protect PG&E, one of the biggest energy producers out there in California, and originally before this bill came out, it was if PG&E had a piece of equipment out here that started throwing sparks and created a wildfire, they have to pay for all the damages.

Mike Papantonio: Okay, the term, and this is important.

Mike Papantonio: This is the new trend. It is to take these big energy companies and say we used to make you responsible for when you did bad things. In this situation, you have … it’s clear that they’ve almost burned down the entire state of California, if you want to put it in the simplest terms. Because of that, we hold you under a standard of strict liability. They want to remove that. They want to say no, there’s no strict liability any more. We’re going to shift it on the taxpayers.

Farron Cousins: Right, well now, under this new legislation, PG&E and any other energy company out there, power company, they get to pass the cost of it onto the consumers, the people who are paying their monthly tax bill, or excuse me, power bill, so now in addition to your monthly electrical services, you’re going to see an additional charge on there for fighting the fire that PG&E created.

Mike Papantonio: Caused, okay, so taxpayer, you gotta pay, we’re gonna keep all the profits, by the way.

Mike Papantonio: PG&E is gonna keep all the billions of dollars in profits. Taxpayer, we messed up. In the old law, we could argue strict liability, we could argue inverse condemnation, and then all of a sudden, PG&E says well, if you do that, we’re gonna go bankrupt. Remember that? That’s part of this story. Farron Cousins, thanks for joining me. We’ll have stories like this every week. They never really go away, do they?