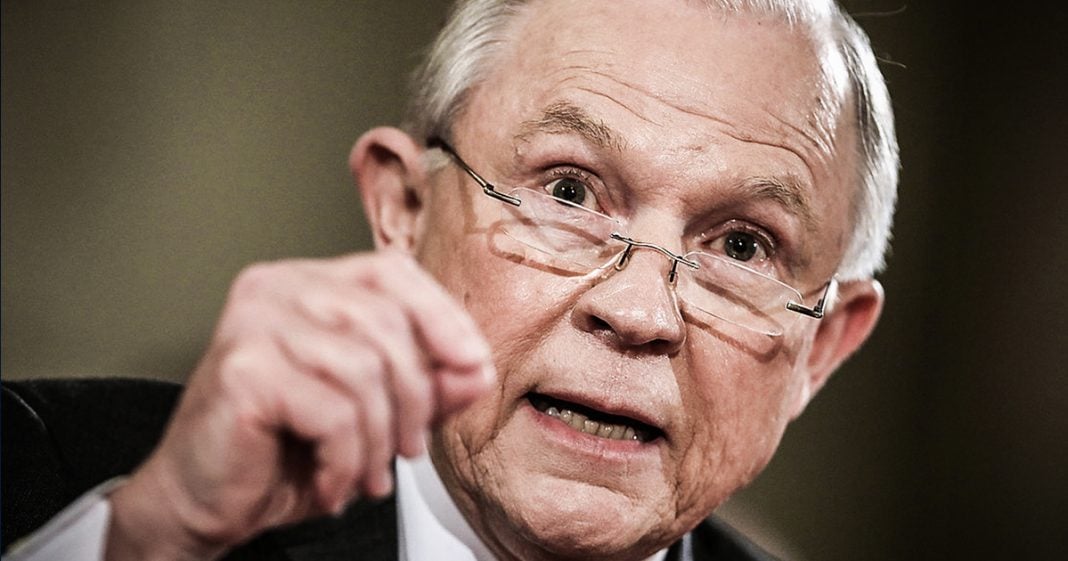 Earlier this week, Jeff Sessions lectured a group of incoming immigration lawyers and judges and told them that they need to NOT show any sympathy towards immigrant children being held at the Administration’s separation camps. Not only is this a disgusting thing to say, it is also a potentially illegal interference with cases coming before these litigators. Ring of Fire’s Farron Cousins discusses this.

We found out this week that the Trump administration currently has 12,800 children, migrant, immigrant children, locked up here in the United States. Now most of those, at the moment, are actually with their parents in these detention facilities. Only about 400-500 have been separated, but we do know based on reports that the administration is trying to increase the size, triple the size, actually, of the child detention facilities so that they can once again begin separating them from their parents.

Now the reason that’s important is because on Monday of this week, Jeff Sessions met with a group of brand new immigration lawyers and judges where he told them to make sure that they don’t have any sympathy for these immigrant children because god forbid that sympathy influence your ruling or your representation of these people. Here’s an exact quote of what Jeff Sessions said. And there were 44 new immigration judges at this little gathering in Virginia. “When we depart from the law and create nebulous legal standards out of a sense of sympathy for the personal circumstances of a respondent in our immigration courts, we do violence to the rule of law and constitutional fabric that bind this great nation. Your job is to apply the law, even in tough cases.”

Now, to an extent, Sessions is right. Judges are not supposed to let their personal feelings interfere with their rulings there, but at the same time we kind of have to in this instance because what the administration is doing to these people is illegal. So you can have sympathy who has had their most basic civil rights violated by an administration that is stamping all over the Constitution, all over previous court rulings, and all over settlements that have been made by the federal government saying we’re not going to do these things. You can have sympathy for those people. You can be a human being. You don’t have to be a racist piece of trash like Jeff Sessions, and act like they’re somehow less than human.

But that’s what we’re getting from this administration right now, especially from Jeff Sessions. He took away amnesty, which it was legal, legal for these people to come in to the country seeking amnesty. He took it away and turned them into criminals. That’s how a lot of these people got separated. That’s why they’re facing these harsh immigration courts right now from judges who, according to Sessions, shouldn’t have any sympathy. Jeff Sessions created this mess. Yeah, it was going on before him to an extent, but he came along and made it so much worse into the human rights disaster that we’re now seeing on our southern border. That lies at the feet of Jeff Sessions, and for him to come out and tell these people to not show any sympathy is absolutely deplorable.

Hilary Clinton was right, 100% right about her basket of deplorable comments, except that it’s not just the voters who put him in office. It’s also the people that Trump appointed to run his government. Jeff Sessions is quite possibly the largest deplorable sitting in that government basket today.