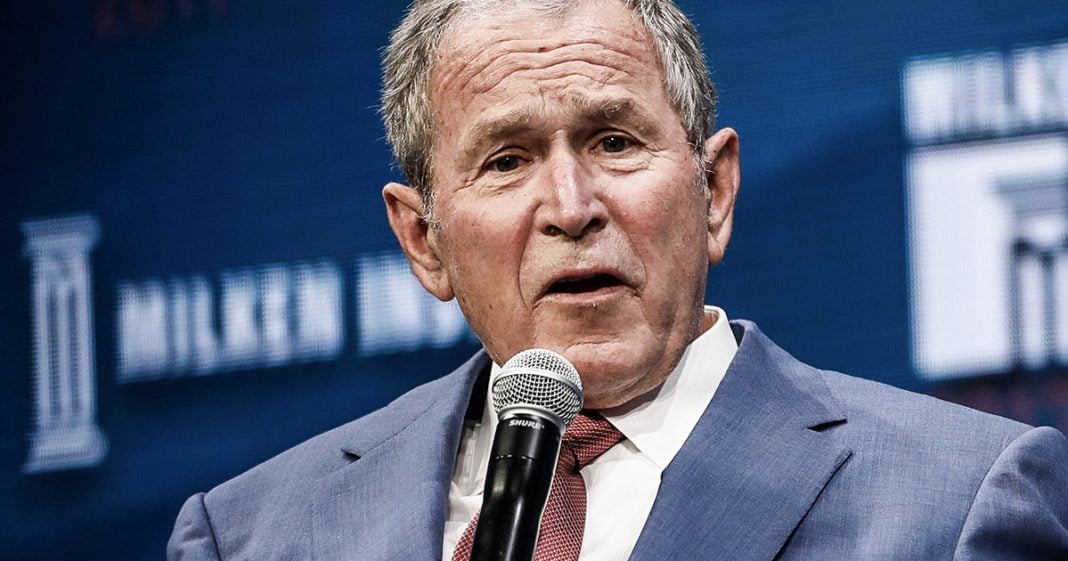 Former President George W. Bush is following the lead of Barack Obama and will be hitting the campaign trail to help embattled Republicans. But while Obama actually has pretty good standing among voters, Bush is widely regarded as a failure by moderates and Independents, meaning his presence is likely going to remind people of how disastrous Republicans are when they hold office. Ring of Fire’s Farron Cousins discusses this.

Recently, Barack Obama began hitting the campaign trail on behalf of Democrats across the country, trying to get people motivated to go out and vote.

George W. Bush, former Republican president … widely regarded before Donald Trump came along as the worst president in U.S. history … decided that he too was going to get off the sidelines and get into the game.

And now embattled Republicans facing a blue wave in the midterms this year have to depend on George W. Bush to come in and save them. Bush has already announced that he’s going to be doing fundraisers for House and Senate candidates both in Texas and Florida, and a handful of other states. He’s already got events planned, closed-door events with big-money Republican donors trying to get them to donate to these embattled Republicans.

Now I want to paint a stark picture for you here. I’m sure Obama’s going to go out and do the same thing, obviously. Right? But Obama’s also out giving speeches and talking to average voters. He is being seen. He’s talking to average human beings, not just the big-money donors, but again it’s probably going to happen.

Meanwhile Bush says he’s going to go out and help Republicans by only talking to the big-money people. That’s what he’s doing here. That’s a big difference between Democrats and Republicans. Yes, they both take corporate money. I understand that. But at least Democrats also listen to the people and occasionally will do what the public wants. Republicans have no idea how to listen to average, everyday people, and then enact policy based on those conversations.

All they care about is that corporate campaign money, and that’s why George W. Bush is getting involved. But there’s a little bit of a more sinister reason here. George W. Bush, as I previously mentioned, was widely regarded as one of the worst presidents in U.S. history. He left office with an approval rating that was in the toilet. It’s gone up a little bit since then because of how bad Donald Trump is.

So Bush is actually out there trying to convince Republican donors and Republican voters that “Hey! Not everybody in the Republican party is a Donald Trump. I’ve criticized the guy. I’ve never mentioned him by name. But I’ve still criticized his policies and the racism we see from him.” So, “Yeah, remember what it’s like to have decent Republicans like me?” The guy that started an illegal war based on lies that still goes today? Thousands upon thousands upon thousands of lives, both U.S. soldiers and Middle Easterners dead because of George W. Bush.

And he thinks he’s going to come out and be the savior of the Republican party in the midterms? Yeah, that’s not going to happen. In fact, if anything, George W. Bush’s presence out there is going to remind people that Trump wasn’t the only incompetent Republican to serve as president, in this current century. And that’s the point of this. Bush thinks he’s going to go out and show that “Hey. We’re not all like Trump.”

But in reality, he’s going to remind everybody that every Republican president that we’ve had since the year 2000 has been an absolute, bumbling moron. And if you want to continue having these bumbling morons run your government, then absolutely give money to George W. Bush and the idiot candidates that he’s endorsing like Rick Scott down here in the state of Florida.

But if you want an intelligent government, one that actually listens to the American public, stay away from these Republican candidates and the failed former presidents that they’re bringing in to try to bolster their campaigns.