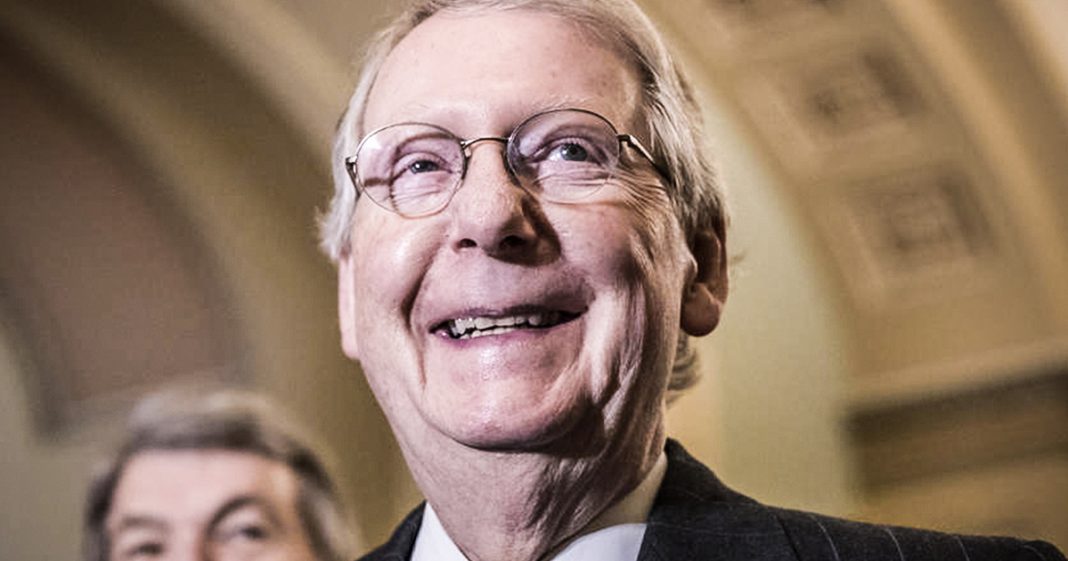 With the media so laser-focused on the hearings of SCOTUS nominee Brett Kavanaugh, the Republicans were able to broker a deal with Democratic Senators to fast-track a gaggle of right wing corporatist judges for lifetime appointments on federal courts. This story was completely missed by the corporate media, and the pro-corporate, anti-consumer rulings from these courts will likely be ignored as well. Ring of Fire’s Farron Cousins discusses this.

While we’re still currently waiting to find out whether Brett Kavanaugh is going to be either the next Supreme Court justice or whether he’s actually going to be impeached from the court he’s currently on, what’s happening in the Senate is that they don’t so much care about Kavanaugh. They’re more worried about packing every other court in this country with right-wing political corporate hack judges. That is exactly what’s been going on ever since the day that Donald Trump nominated Brett Kavanaugh to that vacant seat on the US Supreme Court.

In the two months since Kavanaugh was nominated, 26 judges have been confirmed by the Senate to federal appeals court and district court judgeships. Every single one of these is a lifetime appointment. All of that happened, again, 26 of them, in the two months since Kavanaugh was nominated. Now, if you’re watching this, I want you to ask yourself this question. How many times did you hear anybody in the corporate media talk about that? Do you know the names? Can you name one of those 26 judges that Republicans rammed through the Senate? Can you name the Democrats who struck a deal with Republicans two weeks ago to fast track 11 of these corporate political hack judges for lifetime appointments on our courts?

That we probably can. Chuck Schumer led the charge on that one, working with Republicans to try to get as many of their judicial picks on the bench as possible before the midterms. Donald Trump inherited 108 judicial vacancies throughout the United States that have not been appointed during the Obama era. Now, we’ve talked at length as to why these were left vacant. Some were Obama’s fault, some was obstruction fault. Overall, they were vacant. He has appointed close to 100 at this point, most of which have been confirmed, and yet now due to retirement and other factors he still has 126 left to confirm here in the United States.

He has even more than he inherited. He has appointed more judges so far this year, the second year of his presidency, than Obama did in the second year of his presidency. By the end of this year, depending on how things go, possibly even by the end of next year, he’ll have appointed more judges than Barack Obama, completely reshaping the judicial landscape here in the United States, and people don’t care. They think the only thing that matters is the Supreme Court. You have to understand. I know it’s the court of the land, the top of the top, but very few, a tiny fraction, of all cases in this country ever go there.

Most judicial issues are figured out and determined and settled in federal appeals courts and district courts across the country. Republicans know that. Democrats and their voters don’t seem to understand that at all. That’s why Republicans are so obsessed with packing these courts with pro-corporate, anti-consumer judges. They know they can dangle a horrible Supreme Court justice in front of your face and you’re gonna eat it up and follow it wherever it goes. While you’re doing that, they’re packing the courts with people who are gonna strip you of your civil rights, of your right to choose, of workplace protections, and of environmental protections.

Then you’re gonna wonder why the US Supreme Court’s not doing anything about it. The answer is because they only are in session really a few months out of the year. They take long stretches of time off and they barely hear any cases at all, certainly barely any cases of consequence. Those were all previously decided in the lower courts that received an unusually high number of corporate judges during the Bush administration and a fair amount of corporate judges during the Obama administration, and now with the Trump administration, not just are we getting corporate right-wing political hacks, but we’re also getting plenty of justices that the American Bar Association has actually listed as completely unqualified to be a judge in the United States.

But keep focusing all your attention on Kavanaugh. It is important, yeah. But really in the grand scheme of things that’s nowhere near as important as what has already happened to district courts, federal courts, all over this country. Those decisions are gonna impact more people more closely than anything that could come out of a Kavanaugh Supreme Court.