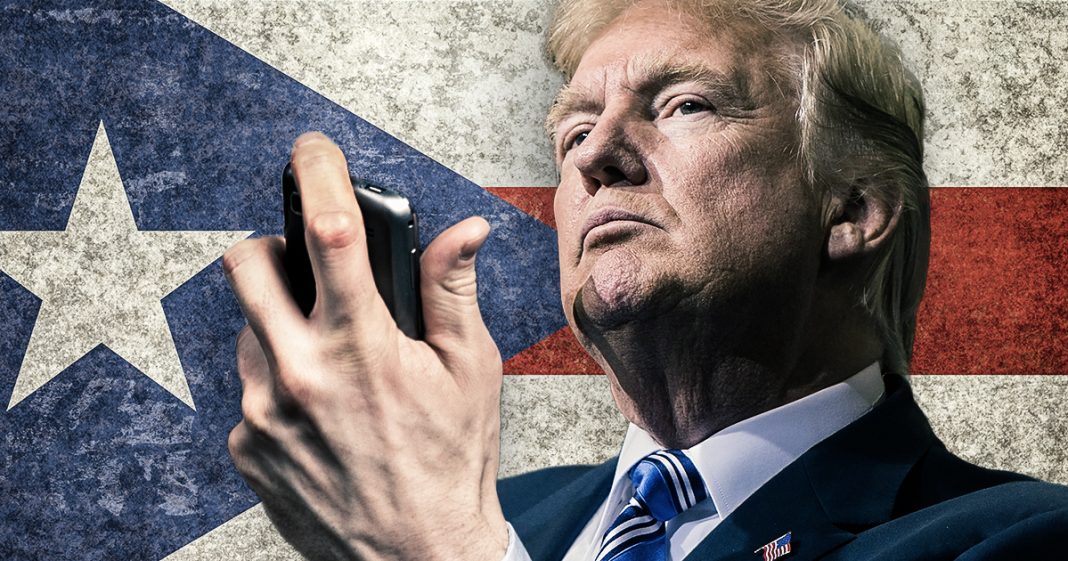 Just when you thought Donald Trump couldn’t sink any lower with his denial of reality, he comes along and Tweets that nearly 3,000 American citizens DIDN’T die during Hurricane Maria in Puerto Rico, and that somehow this death toll number is the fault of the Democrats. This is reality-denial the likes of which we’ve never seen from the Oval Office, as Ring of Fire’s Farron Cousins explains.

It almost seems impossible that Donald Trump could sink any lower than he already has on Twitter with insulting people’s intelligence, going after their personal appearances, things like that, but this morning he actually managed to outdo himself when he said one of the most horrid and disgusting things that he has ever said since become President of the United States. Here it is, spread out over two tweets. “3000 people did not die in the two hurricanes that hit Puerto Rico. When I left the Island, AFTER the storm had hit, they had anywhere from 6 to 18 deaths. As time went by it did not go up by much. Then, a long time later, they started to report really large numbers, like 3000…” “…..This was done by the Democrats in order to make me look as bad as possible when I was successfully raising Billions of Dollars to help rebuild Puerto Rico. If a person died for any reason, like old age, just add them onto the list. Bad politics. I love Puerto Rico!”

So Donald Trump is telling us that his negligence, the callous attitude toward those American citizens in Puerto Rico, they’re not actually dead. They didn’t die. It wasn’t storm related if they did die. I’m sure that’s consolation to all the people who buried their 2,975 relatives, loved ones, friends, families, whatever. Maybe they can just dig them up now because apparently they didn’t die. I guess they should go check on them.

It’s true that 3,000 people didn’t die in the storm, they died from what happened after the storm. And what happened after the storm is 100 percent Donald Trump’s fault. As the leader of the Federal Government, which makes him of government organizations like FEMA, whose job it is to make sure we have proper disaster responses in areas like Puerto Rico, yeah that is your fault. They didn’t have clean water, they had water filled with bacteria. They didn’t have proper infrastructure in place, and yes that is the responsibility of the U.S. Government to make sure that that can happen. Hospitals were overloaded. People who had regular illnesses could not get in because of all the people injured from the hurricane. Any death like that is hurricane related. ‘Cause it would not have happened had the hurricane not come to the island.

The President right now is trying to deny reality and not just deny that it exists, but also blame Democrats for what is allegedly a lie that almost 3,000 people died. The man is absolutely insane, as is anyone out there defending anything that he says. You’re insane. You are and so is this man. He is not fit to be the President of the United States, not by a long shot. This tweet is absolutely abhorrent. Especially as we have a massive hurricane bearing down on the United States right now and the people in that path of that storm need to understand that once the wind goes away, once the flood waters recede, which could take weeks, President Trump, FEMA, all the people that you think are going to come help you, they won’t be there. You’re gonna have to rely on aid and generosity from your fellow American citizens.

And as for the claim that Donald Trump helped raise billions of dollars for Puerto Rico, that is an outright lie. There is no evidence whatsoever to back that up. There are no campaign speeches, there were no rallies, there were no fundraisers, there were no tweets, there is nothing to indicate that this man did anything to raise any personal money or get people to help donate to Puerto Rico. He is an absolute liar, he is a con man, and at this point it’s pretty safe to say that this man is absolutely insane.