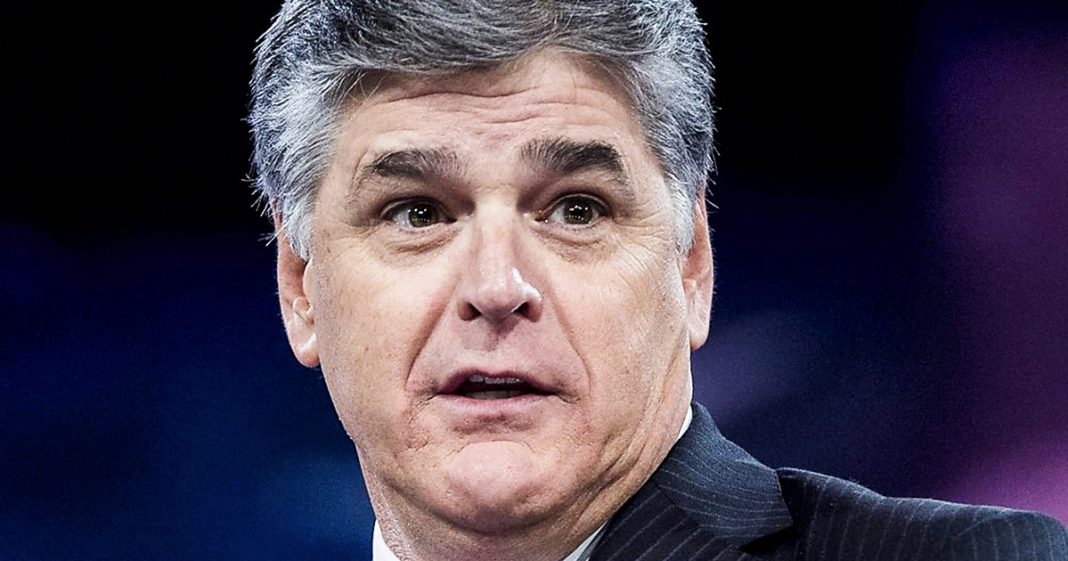 According to Sean Hannity, the President is planning on firing Special Prosecutor Robert Mueller and will do so sooner rather than later – possibly after Hurricane Maria hits the United States. Hannity didn’t specify whether he thought the hurricane would be a good distraction to use to fire Mueller, but it certainly would prevent widespread coverage of the issue if that’s the goal. Ring of Fire’s Farron Cousins discusses this.

Donald Trump’s close, personal friend, Sean Hannity, said earlier this week on his radio program that he is convinced that Donald Trump is going to fire Special Prosecutor, Robert Mueller, and he’s gonna do it sooner rather than later. He made these comments on his radio program on Tuesday of this week. But, he said he obviously he wasn’t gonna do it right now, not on the anniversary of 911, not with Hurricane Florence bearing down on the United States, but soon. Don’t worry, it’s absolutely going to happen soon.

This is actually one of those rare instances where I 100% believe what Sean Hannity has to say. Sean Hannity as has been confirmed by more than a dozen officials within the White House has regular phone conversations with the President of the United States where they discuss everything from policy to Special Prosecutor, Robert Mueller, even what Donald Trump is going to tweet out the following day. So, yeah, these two best buds talk about every single thing possible. So, when Sean Hannity tells us that Donald Trump is ready to fire Robert Mueller, that’s actually one thing that Hannity says we should probably believe.

But, here’s the thing, he’s not gonna do it with hurricane Florence bearing down on the United States. He’ll probably do it after. But, he didn’t say how soon after. If you ask me, after we have this horrible natural disaster here in the United States with all the media focused on that, doesn’t that seem like the perfect opportunity for a president to fire somebody and not get very much attention about it? I would not be surprised whatsoever if that is what Donald Trump decides to do.

And, he actually could play to his base a little bit and give the reasoning of, you know what? We’ve got real issues to deal with here. We’ve got this massive hurricane. We can’t be distracted with this witch hunt, so we’re going to end it now so we can focus on making the lives better for these people. It’s a bullshit excuse, but it’s absolutely an excuse that he would 100% use. ‘Cause as we all know, as we’ve seen from this administration following others natural disasters, he’s not gonna do anything to help those people that are about to get their lives destroyed here. He doesn’t care. He’s already taken $10 million away from FEMA and given it to ICE to build more child detention facilities. So, yeah, those people are on their own. But, that is the perfect cover that he is more than willing to use to fire Robert Mueller.

But, the bigger issue here is that Donald Trump and Sean Hannity are both collectively so incredibly stupid. I mean, you put their IQ’s together you could even bring it to room temperature. But, they think that firing Robert Mueller makes this go away. They obviously have no idea who Richard Nixon was. ‘Cause Nixon did the same thing and it made his life so much worse. In fact, that’s pretty much what ended his presidency. Because you cannot end an investigation, you can only fire the person doing it. So, you then have to replace them. And, trust me, since you don’t get to be the one to pick the replacement, it’s gonna be somebody so much worse, who works so much faster because they know what you wanna do to them. It’s going to end badly for you either way. The best thing you can do is to stay out of it, let the investigation run its course and hope that if you committed a crime, they didn’t find it, because if you try to meddle in this, it is gonna backfire on you spectacularly and you won’t even know what hit you at that point.

So, as somebody who doesn’t even like you at all, you or Hannity, I am telling you, if you do what you’re thinking about doing, it’s not gonna end the way that you think it will. How about you focus your efforts on helping the people who are about to get hit by this massive hurricane and the massive flooding and let the investigators actually do their job.