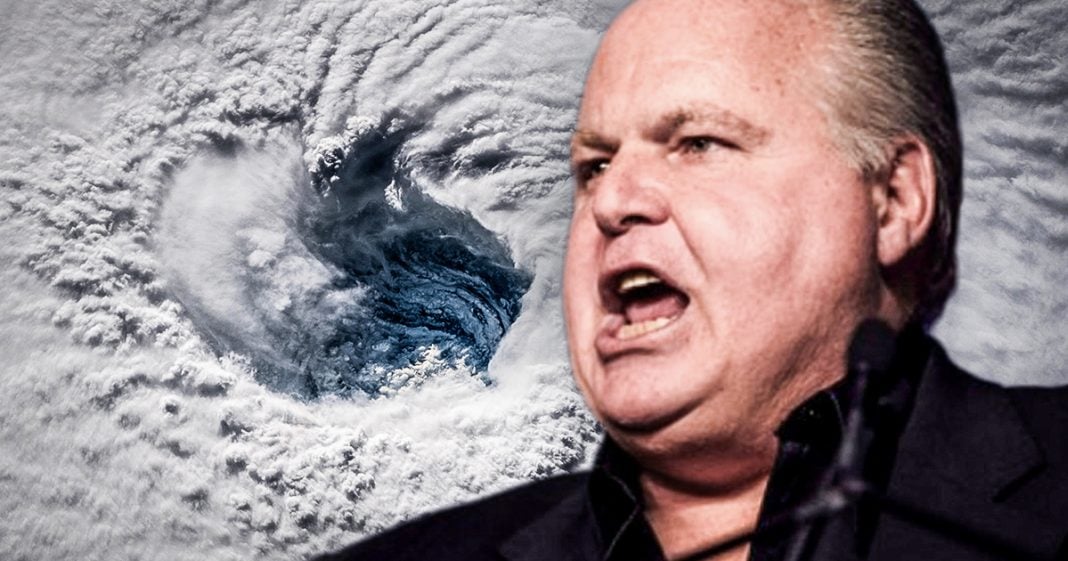 Rush Limbaugh has absolutely had it with those scientists and experts telling us that climate change is making hurricanes stronger, and he used a recent episode of his radio program to let everyone know it. He claims that all of the forecasts about Hurricane Florence are being driven by “political agendas” designed to get us all to believe in climate change – or as the rest of the world calls it, SCIENCE. Ring of Fire’s Farron Cousins discusses this.

I know a lot of people right now are absolutely terrified of what Hurricane Florence could do to the east coast of the United States. The heavy winds, the massive storm surge, the predicted flooding that is going to take place, and the secondary flooding that they’re predicting is gonna happen after the rain hits the mountains and then all flushes back down. But don’t worry, folks, because according to Rush Limbaugh, all of these forecasts for what Hurricane Florence is going to do, that’s just climate change propaganda coming from environmentalists. That is what Rush Limbaugh told his listeners this week.

Now I’m going to read you this full Rush Limbaugh quote. This is from a transcript of his program. You can find the link in the description of this video. Here it is. “This is, they tell us, one of the most powerful hurricanes this far north ever. And of course, why is that? Well, that would be sea surface temperature. And why is that warmer? There you go, climate change. It’s being accepted as a non-argumentative fact. I don’t care what meteorologist you watch or read, website or what have you, all of this seems to be acknowledged fact. So we’re keeping an eye on that. Also these things have become very politicized, as you know, folks. Hurricanes and hurricane forecasting is much like much else that the left has gotten its hands on, and they politicize these things. For those of you asking, what’s the politics of a hurricane? Climate change is the politics of hurricanes. So we don’t have to worry about anything, because this is just politics. It’s Democrats getting in there and trying to get us to care about that bad old climate change, that Chinese hoax that’s out there. Don’t worry about the forecast.”

Over the years, we’ve talked about a lot of dumb things that have come out of the mouths of those on the right, but this is like Alex Jones level combination crazy and stupid, coming out of one of the most popular Republican talk show hosts in the country. Now I’ve got to be honest, I had forgotten that Rush Limbaugh existed. We haven’t heard too much from this nut job since Donald Trump came into office because he’s not the only nut job around anymore. We have Trump. We have Hannity, who’s gone even crazier, Tucker Carlson, who’s gone full white nationalist now, Laura Ingraham, Tomi Lahren, Shapiro, Cernovich, all those other nut jobs out there. So, Limbaugh’s got to fight, get a little bit crazier than usual in order to actually retain his audience.

But we’ve seen this happen before. Now, back in 2004, 2005, this same kind of scenario played itself out. We had a lot of little upstart right wingers in this country, and in order to gain the very limited attention that was available, they each had to start saying crazier and crazier and crazier things. That’s when Ann Coulter was really big and Michelle Malkin was trying to take over as the new right wing queen of hate. It didn’t work out so well for her. Most people have forgotten she existed. But that’s what Limbaugh’s trying to do here. Yes, he is a climate change science denier, but he knows if he wants to hold onto his base, to his crowd, to his audience, to his contracts, he’s got to get crazier because if he’s not crazy enough, they’re just gonna go listen to Hannity. They’re gonna go watch Tomi Lahren. They’re gonna follow whatever crap it is Ben Shapiro is doing today.

So, you have to out-crazy the person before you so that you can keep your audience. We’ve seen this scenario play itself out on the right before. It’s playing itself out again right now. But what is important is that these people are so desperate to maintain an audience, that they’re actually willing to put people’s lives at risk with Hurricane Florence, like Rush Limbaugh’s doing here, because he just wants people to think that he’s the craziest of the crazy, and therefore he is the one worthy of their attention.