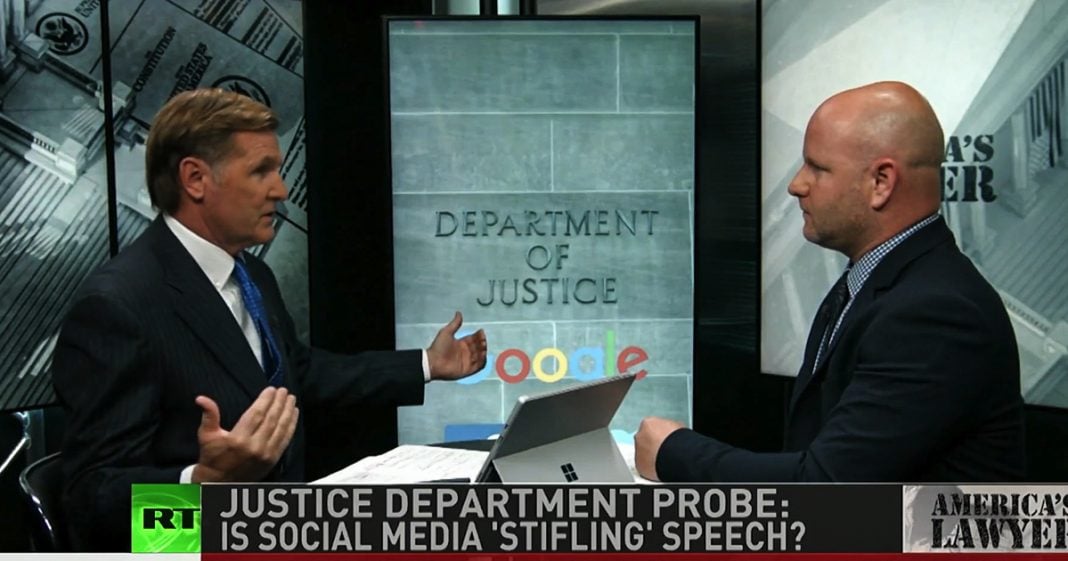 Via America’s Lawyer: Mike Papantonio and Trial Magazine Executive Editor Farron Cousins discuss hearings in D.C about the banning of dissenting viewpoints from social media outlets and Justice Dept. announcement that they would be meeting with State Attorney General’s to discuss the legality of these bans, and whether or not there needs to be tighter regulation of social media outlets.

We’re going to talk about this story and other stories of the week, but this story has to be a lead story. I mean, this is important on so many levels, isn’t it? You’ve done stories where you talked about the idea that we built this. We built the infrastructure. Taxpayers, people watching this, helped build the infrastructure. Now we have these private companies that are almost in a quasi-government kind of situation here, aren’t they? I mean, they’ve got a responsibility to the taxpayers who helped build this thing out, because without that, they wouldn’t be in business.

Farron Cousins: It’s a really interesting thing that we’re dealing with these days with these social media outlets, because yes, taxpayers helped to fund the entire infrastructure of the internet. You know, they didn’t pay for all of it. The companies did come in. They paid for some of it, but most of it was government contracts, our tax dollars. But then, if they also want to be in this news distribution business, then that also raises another legal question of, can you actually censor a certain news voice just because you disagree with it? Hate speech, obviously that’s one thing, but there’s always that slippery slope and we’re already seeing it. Just the last week or so, after Alex Jones got banned, we’re seeing other both liberal and conservative outlets, their stories aren’t getting shared. They’re not getting any views on anything, and it’s because these social media outlets, Facebook especially, is suppressing them to the extent they can.

Mike Papantonio: Okay, so here’s what’s going to happen. Let me make some predictions. It’s already started. You’re going to have lawyers that are coming in, and they’re going to say that Alex Jones … Let’s use the outside of it. I mean, yeah, this guy’s got some … He’s got some issues, but Alex Jones owns a piece of property, right? It is his site. His site is moving through this infrastructure that taxpayers helped pay for, right? It has a value to it. It’s a property right. All of a sudden, somebody says, “We’re going to take away your property right.” In there, if you think about it, there’s also a Commerce Clause argument, isn’t there, because we have advertisers that are paying to be on Alex Jones’s site. Commerce is interfered with. If they take away his right to further that commerce, you’ve got, I think, a legitimate Commerce Clause issue. You certainly have issues that are going to center around issues like equal protection and due process and even antitrust.

Now, these attorney generals, and I got to tell you something, we’ve worked with the attorney generals on tobacco cases, we’re working with them on opioid cases right now, they have the ability to do some investigating that other entities can’t. When they hire private lawyers to help them with that, this is a big problem. I predict this is a big problem for Google. It’s a big problem for Twitter. All of these sites that think they’re going to skate on this, they better lawyer up. Am I overstating that, as you look at this story?

Farron Cousins: Well, we have several different facets of this. First and foremost, Alex Jones, I’m not going to defend him at all, probably deserved to be banned for the things he was saying. He was trying to cause harm to the families of the Parkland, or excuse me, the Newtown shootings. But we also do have to deal with that slope. Yes, he was doing horrible things, but now people who aren’t doing horrible things are banned. Now, was his business affected by this? To an extent, yes, but his personal website still exists. You can still go to whatever it is his website is. That’s still there. It still exists. He just can’t share it on these particular outlets so-

Mike Papantonio: Okay. You have to admit that interferes with commerce. I mean-

Farron Cousins: Right, and so then you do run into that issue. He wasn’t banned from the internet itself, but if you can’t reach anybody, what kind of muzzle effect is that having?

Mike Papantonio: Well, the next question is, who makes the judgment call? Who makes the judgment call, this is hate speech, this is some … I mean, listen, we live in a society that has such diversity in opinion. Conservative, liberal, in the middle, it’s all out there. Now we have somebody with Google or somebody with Twitter sitting in some ivory tower saying, “Well, I don’t like Alex Jones. I’m just going to phase him out.” I don’t like Alex Jones either, but if I don’t want to listen to Alex Jones, I simply turn the channel.

Mike Papantonio: Now, here’s what I see developing right now. This is a big issue, I think. You’re now seeing the stories about why Google is doing this from a political standpoint. You’re seeing that all the money that came out of Google, whether it was the employees, whether it’s CEOs, whatever, 90% of it went to Democrats. That’s where these lines are coming in place. Right now in the United States, you have more Republican attorney generals than you have Democratic attorney generals. These guys have incredible subpoena power. They can do a lot of things right within their state that are going to cause these companies big problem.