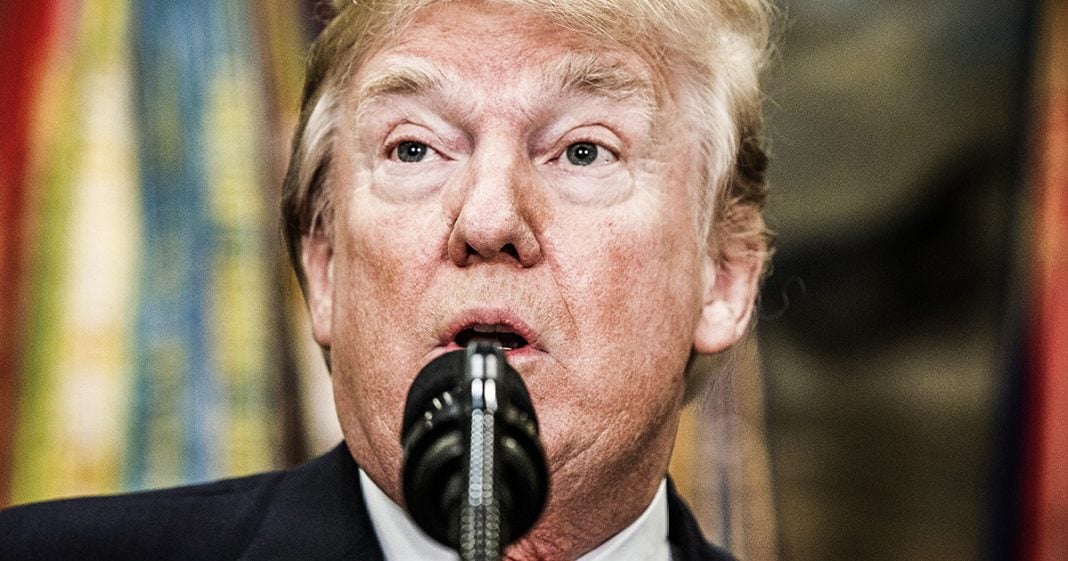 Native American tribes are banding together to sue the Trump administration to force them to put an end to the Keystone XL pipeline plans. The tribes are arguing that treaties with the US government went unheeded, in addition to various other complaints, and therefore the pipeline should be immediately put to rest. Their arguments are solid, and Ring of Fire’s Farron Cousins explains why a fair judge would rule in their favor, but there aren’t too many fair judges left in this country.

It’s been quite some time since most Americans have heard the phrase “Keystone XL Pipeline” but believe it or not, that pipeline is actually currently under construction here in the United States. Towards the end of the Obama administration after actually looking into the issue for almost eight years, they finally decided, “You know what? We’re not going to give you the permit to build this.” The only reason they did that is because the public pressure against the pipeline became too much for them to continue to ignore, so they finally said, “All right. Fine. We give up. We’ll pull the permit. Are you happy now?”

Well, shortly after Donald Trump came into office, he gave the permit back to them and said, “Go ahead. Start building your disgusting pipeline,” because, according to Trump, this is going to be “part of a new era of American energy policy that will lower cost for American families and very significantly reduce our dependence on foreign oil and create thousands of jobs right here in America.” Now I want to address those claims by Donald Trump in just a moment, but I want to start by saying this, right now because this pipeline is being built, two Native American tribes have banded together to sew the Trump administration to force them to pull the permit from TransCanada, the company that owns the pipeline, in order to stop it.

Basically to put it in legal terms for you, they’re screwing over Native Americans here in the United States in every single possible way. They don’t care about the treaties that we’ve signed. They don’t care about the environmental laws that we have. They just want to get this pipeline in because TransCanada wants them to. Now back to those claims from Donald Trump, this is going to reduce our dependence on foreign oil. Well, first and foremost, what’s going to be going through the Keystone XL Pipeline is foreign fossil fuel. That’s not coming from the United States. It’s not. It’s coming from Canada. Hence, the company doing it is TransCanada.

Second of all, it’s not even coming to the US. That pipeline is going right down to the Gulf of Mexico so they can load it onto tanker ships and ship it overseas. That’s not ours. It’s not going to do anything to reduce our cost, so there’s lie number two busted. As for that thousands of jobs, I think the actual job number of permanent jobs that the pipeline’s going to create is 36. It’s been a few years since I’ve had to pull that number out of memory, so it’s somewhere around 36. I know it’s less than 40 total permanent new American jobs. That’s actually according to the State Department itself. 36 jobs.

You get more jobs than that opening up a new McDonald’s somewhere. We’re putting our entire environment at risk, basically trampling the rights of these Native American tribes for 36 jobs, no additional energy independence, and sure as hell no reduced energy cost for those of us here at the United States. Wow. All of us are getting screwed, but at least these Native American tribes have a full proof legal argument. If they are able to bring this argument in front of a fair and impartial judge here in the United States, there is virtually no way that any fair and impartial judge could rule in TransCanada’s favor.

Unfortunately here in the United States, we’re running out of fair and impartial judges and instead they’re being replaced by pro-corporate anti-consumer hacks, which doesn’t leave me very hopeful for the future of this lawsuit that’s been filed.