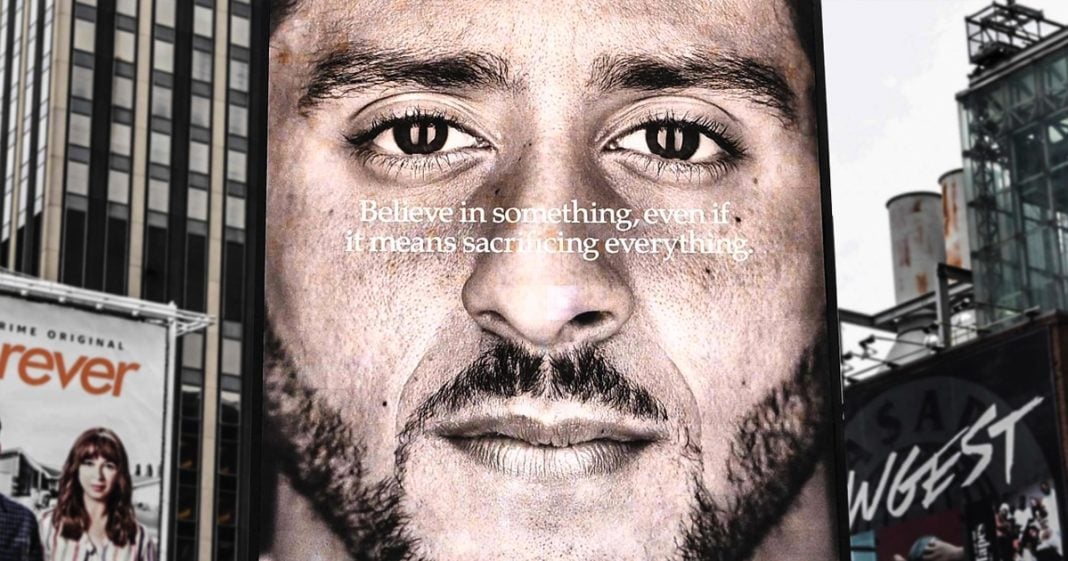 Bart Chilton: Nike Incorporated has taken some hits after featuring controversial National Football League player Colin Kaepernick in its Just Do It ad campaign. The move sparked boycotts and protests from those who condemned the player for kneeling during the national anthem to protest racism and police brutality in the United States, but taking a stand on social issues seems good for business. At least, it does in this instance, as Nike stock reached an all-time high of $82.20 per share last Friday. And while some people have actually burned their Nike shoes in protest, the Colin Kaepernick campaign is already making millions for the sportswear company.

Mollye Barrows, journalist with the Ring of Fire Network, joins us with more. Mollye, thanks for being with us. Was the campaign a big risk for Nike from the beginning?

Mollye Barrows: Well, you might have thought so based on some of the social media videos that you saw with folks burning their Nike shoes or tearing their socks with the Nike symbol on it, but this company has a long history of associating itself with social issues and coming out on top when it comes to advertising. In fact, Apex Marketing said that they’ve made about, oh gosh, 43 million in media exposure in the first 24 hours alone of releasing this ad. So Nike, arguably one of the most successful marketing companies in the world, they must know their numbers, Bart, because they certainly seem to be coming out on top of this.

I’m sure they knew they would lose a few customers, but in the end, they know their customers, and it’s a young base. Most of them are under 35. They come from a variety of racial backgrounds. Certainly an issue like the one that Kaepernick is taking a stand on they’re going to relate to, and millennials in general want to support companies that support causes that they also support. So all in all, this could be a win for Nike, and it looks like it has been so far.

Bart Chilton: Are they putting some big bucks into this? I mean, how much are they investing in this campaign?

Mollye Barrows: You know, I don’t have the exact number, but apparently this new deal, which was an extension of a deal that Nike already had with Kaepernick, is worth millions and millions. This is a star deal, is what they call it, so they must expect something to come out of it. And, in fact, if you take a look at his numbers before …

By the way, if protestors did want to boycott Nike, they’re going to have a difficult time doing it, because they are the outfitter for the NFL, and to that point, Kaepernick’s jersey has always been one of the top 50 sellers, or it has been in recent years, and after he took a knee recently, igniting this whole firestorm of controversy over the protests, his jersey became one of the top sellers. So Nike, while taking a stand on the social issues, certainly isn’t going to be lost on the opportunity for business, I do believe.

Bart Chilton: Yeah, and when you look at this time of year, back to school time in the US, you often see these sports brands, like Nike, that outfit so many schools, you can see their stocks taking a bump, they call that, Almanac Analytics that the traders look at.

All right, let me ask you this, Mollye. Brands have traditionally avoided taking these sort of really controversial stands on social issues, like Dick’s with guns, et cetera, and Walmart, but is this a sign that maybe more businesses will sort of joining in on these social issues?

Mollye Barrows: Well, some of the articles that I read, more and more businesses are taking a look at it and asking themselves that same question. Nike has a history going back to the 1990s of pairing up with controversial issues, supporting an athlete that was HIV positive back in 1995, along with women’s issues and getting equal play and equal time in sports as well, from different walks of life. So there are other companies that have taken this same approach, but basically they advise if you are going to align yourself with a social cause, don’t jump into every single one head first and expect that it’s going to pay off for you. It’s got to be something that’s in keeping with your brand already.

Take the Body Shop, for example. That was established years ago as using very natural products, and so they partner on a variety of issues that support their brand, like no testing of animals when it comes to cosmetics. And then there’s another, REI. It’s a outdoor sports company, and they also took a stand after the Parkland shooting, started asking some of their vendors, one in particular, do you make these sort of destructive weapons.

And it was not in an attacking sort of way. It was we want to vet our vendors and have all that information out there so that our customers can make choices when it comes to the products that they buy. So it just depends on if basically these companies find something that works with the brand that they have already and can do it in a way that rings true with their customers.

Bart Chilton: Mollye Barrows, journalist with the Ring of Fire Network. Thanks so much, Mollye. Appreciate it.