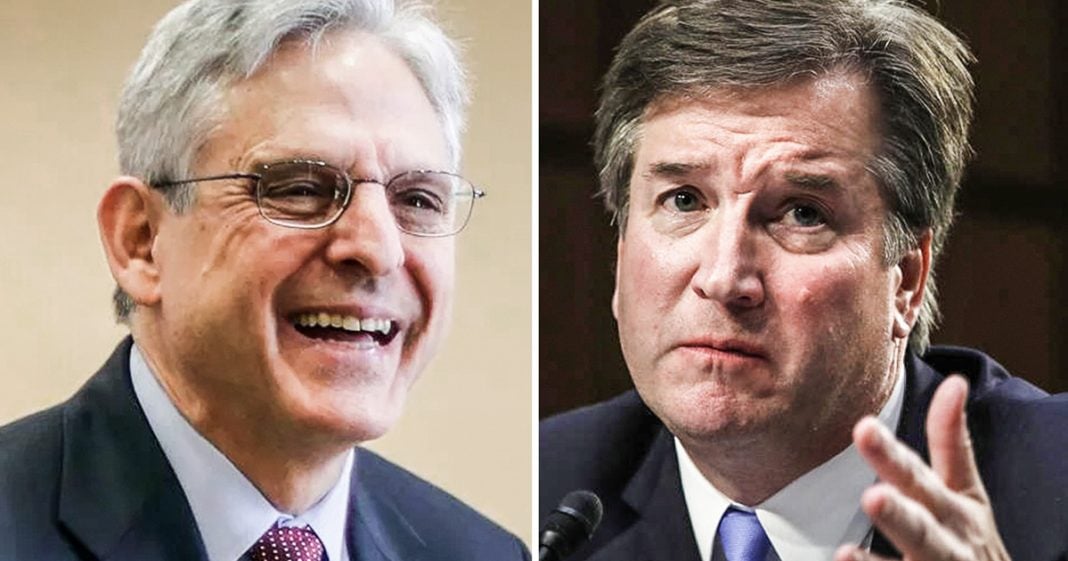 In one of the most impressive instances of karma biting back at the Republican Party ever, Judge Merrick Garland has now been tasked with investigating whether or not Judge Brett Kavanaugh committed perjury twice back in 2004 and 2006 while testifying about his role in stolen Senate emails. The evidence against Kavanaugh is already very strong, and hopefully the newly-filed criminal complaint against him can prevent this corporatist from making it onto the Supreme Court. Ring of Fire’s Farron Cousins discusses this.

Every now and then something kind of amazing happens and that kind of amazing thing is that sometimes Republicans actually get a little bit of karma served back to them for the horrible things that they have been doing for years and years. That actually happened to them this past week. Late last week, a criminal complaint was filed against their Supreme Court nominee Brett Kavanaugh by a liberal group, The Democratic Coalition.

They’re alleging that Kavanaugh perjured himself in 2004 and 2006 when testifying to become an appointed judge here in the United States that he had absolutely nothing to do with the stolen emails from Democratic senators back then when they were trying to warn other Republicans and the judges themselves what Democrats was going to ask or bring up during George W. Bush’s nominee’s judicial hearings. Kavanaugh denied having anything to do with that, but then this past week Senator Patrick Leahy presented evidence at the judiciary committee hearing showing that yeah, Kavanaugh was 100% in it.

If that’s true, that means that he perjured himself in 2004 and in 2006, hence, the new criminal complaint, but the criminal complaint is not the karma part. The karma part is that this criminal complaint now goes to Merrick Garland, the man who Barrack Obama nominated for the U.S. Supreme Court, but Republicans refused to even give him a judiciary committee hearing, let alone bring him to the floor for a full vote. Now that man might be deciding the fate of Donald Trump’s SCOTUS nominee. That, ladies and gentlemen, is 100% how karma is supposed to work. Doesn’t always pan out that way, but that’s what’s happening right now.

Garland will be tasked with deciding whether or not to pursue any charges against Kavanaugh or whether or not he wants to appoint a special set of jurists who will then make the decision whether or not to investigate Kavanaugh’s potential perjury. Here’s the thing though about the whole perjury issue, as I pointed out, Patrick Leahy last week during the hearings presented evidence showing that Kavanaugh was heavily involved with the stolen Democratic senators emails, which he then helped to release to the nominees George W. Bush had put forward so that these nominees could prepare for what Democratic senators were going to ask them.

That’s what these emails were about. There were actually thousands of emails stolen from Democratic senators, one of the few scandals from the Bush administration that actually got no coverage whatsoever. Kavanaugh testified back then that he had nothing to do with it. He wasn’t involved. Because of that, he was allowed to get appointed to a lifetime appointment on a federal court, but those emails have come back to haunt him. Even worst, Merrick Garland has now come back to hunt the Republican Party. Now hopefully politics stays out this. Merrick Garland should not just pursue charges against Kavanaugh because he’s angry.

But if he sees something there, which it’s pretty obvious there is a there there, hopefully he will pursue at least an investigation so we can get to the bottom of this because the last thing we need sitting on the Supreme Court right now is not just a liar, but somebody who will 100% of the time rule against consumers and in favor of corporations. With Kavanaugh, we get all three, a lying corporatist who seems to really, really hate the American public.