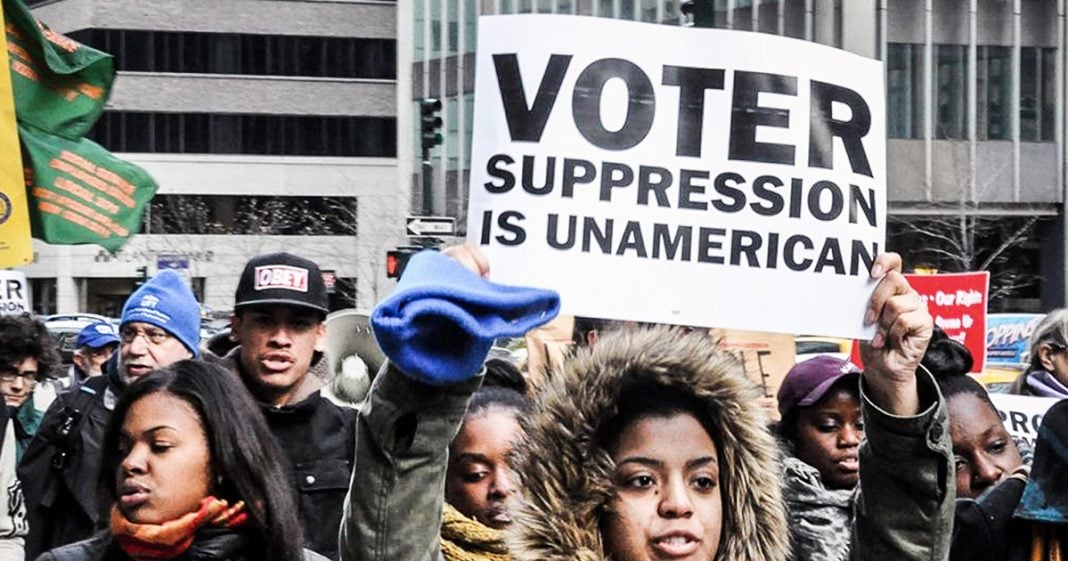 With the midterm elections just a few weeks away, Republicans are ramping up their efforts to suppress the vote by having cities and states shut down polling places in predominantly minority Democratic areas. They are able to do this thanks to a Supreme Court ruling from a few years ago that struck down parts of the Voting Rights Act. Ring of Fire’s Farron Cousins discusses this.

We’re now less than two months away from the 2018 midterm elections and as history tells us, any time the White House changes power, that party typically losses power in the first midterm after their election. So republicans understand that even just historically speaking, they’re looking a losing a lot power. Now combine that with the corruption that we see in Washington DC today, both in the White House and in Congress, and it’s pretty obvious that voters are clamoring for a democratic alternative to the republicans that they currently have in power. But republicans aren’t gonna go down without a fight and rather than fight on policy, on something that people wanna hear, maybe offer them something decent for a change. Instead of doing that, they’re trying to take the cowards way out and cheat their way to another victory.

Here’s what’s happening, five years ago the US Supreme Court struck down key parts of the voting rights act here in the United States. As a result of those parts of the voting rights act being struck down, cities and states can now basically consolidate polling places into single areas, if they see fit. They no longer have to get approval from the department of justice if they are a state that has engaged in the past, in basically racial segregation of their polling places. They don’t have to get approval, so they’re free to just do whatever they want. The only way they would face a challenge, is if a citizen legally challenges the polling district move or anything like that. The polling hours, the ID requirements, something to that nature. So here we are, again, few weeks before the midterms, and polling places around the country are shutting down.

Most of them happen to be in predominantly African American neighborhoods, this is happening at the city level, it’s happening at the state level. All cities and states that run by republicans and they’re shutting down these polling places in African American communities that typically vote democratic because they don’t want those people to be able to vote this year. We have some counties in this country that have shut down as many as 10 of their polling places, trying to consolidate them into one single voting area. Sometimes miles away from many of these citizens who used to have a polling station right down the street from them. Something they could walk to, something they could take five minutes off of work, go and vote. But by closing down these other polling stations, putting them in different locations, now people, some of them who do not have licenses, they cannot drive, they had to rely on public transit, that public transit may not run to that place any more.

So they’re out of luck. They basically got disenfranchised for the fact that they’re not able to drive a vehicle themselves. Furthermore, when you close down polling places and make everybody go to one, inevitably it’s going to make the lines longer. Working class people don’t have time to sit in a line for three or four hours. We saw the same scenario play out in the 2004 elections, they don’t have the time, so they have to leave. You know who does have the time to sit there all day though? Those old white, retired, angry conservatives. They have nothing better to do with their lives, so they could sit in a voting line for four or five hours if need be. But luckily for them, there’s no need for it because none of the polling places that are being shut down, are being shut down in white communities. And to be honest, it’s not just the African Americans that we’re seeing this.

Here in my State of Florida, Governor Rick Scott, two years ago and it continues today, actually started closing down polling places near colleges. Where college kids, many of whom in the State of Florida do not have their own vehicle, they live on campus, they do everything on campus, they get rides with friends to go do stuff, whatever it is. They can’t physically leave the campus without the aid of somebody else, ’cause they don’t have transportation. They used to have polling places right there on the colleges, Rick Scott shut them down. As we all know, the youth vote also tends to skew democratic, so that was Rick Scott’s main purpose of doing that.

Here are some of the states where this is happening, obviously we have Georgia, Arizona, Louisiana, Texas, Florida. Let me find the other list here, Illinois, Kansas, Mississippi, Ohio, Wisconsin, it’s across the board folks. This is going on all over this country and the people being targeted have one thing in common, they are all groups that typically vote for democrats. Republicans know that they cannot win on the issues this year, that’s why they’re going after the voters themselves and keeping them away from the polls because that is the only chance these people have at retaining power in Washington DC, after this year’s midterms.