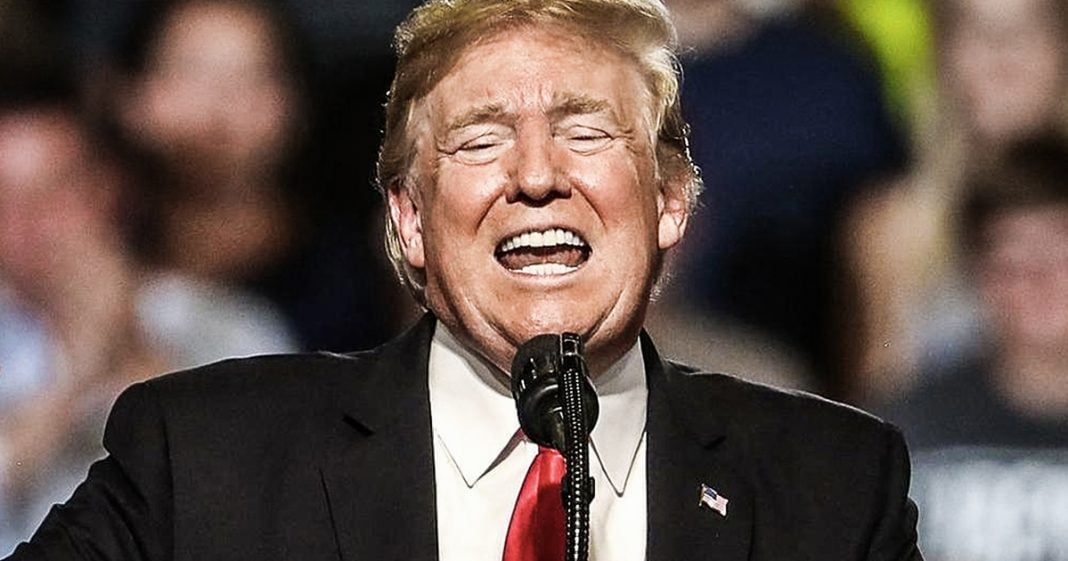 Donald Trump told a reporter from Fox & Friends after his Montana rally this week that he is going to put the construction of his border wall on hold until after the midterm elections because he doesn’t want to hurt Republicans in the midterms. He’s setting up a 2020 campaign with this move, as Ring of Fire’s Farron Cousins explains.

Donald Trump gave a rally in Montana this week, and if you saw it, I’m sure everybody saw the one clip where he tried to say the word “anonymous”, and then failed multiple times to actually be able to pronounce it correctly. It actually sounded like his teeth were falling out. And I mean that to say it sounded like hee was wearing dentures and they started coming out. Nonetheless, the man couldn’t speak. But that’s not what’s important, that’s just the funny part. What’s important is that after the rally took place, Donald Trump spoke with a reporter from Fox and Friends, who asked him about the border wall. “Are we going to get that done?” People were chanting, “Build the wall.” Something that the Fox reporter helped them chant. And Donald Trump said something amazing, he said, “We’re going to put it on hold. We’re not going to do it right now.”

Here’s his exact quote. Let me read this to you. This is pretty remarkable when you think about it. “I guess when you get right down to it, it is up to me. But I don’t want to do anything that’s going to hurt us or potentially hurt us because I have a feeling that the Republicans will do very well, we have the strongest economy we’ve ever had. I think we’re going to do really well in the midterms.” So Trump is saying he doesn’t want to pursue the additional construction of the wall right now because he doesn’t want to do anything that’s going to hurt Republicans in the midterms. Because they’re going to do really well, he thinks. Yeah, definitely. Really, really well.

Well first and foremost, even the Republican party itself has admitted that they’re probably going to lose about 45 seats and tip the balance to the Democrats for the advantage of I think about 22 seats based on what they have and what they think could happen. So everybody knows that the Democrats are taking back the House of Representatives, he’s never going to get that budget money to finish the wall, and that’s why he’s not pursuing it right now. Not because he thinks it’s going to hurt Republicans in the midterms, the base loves that, but because he’s setting it up as a campaign issue for 2020.

This is the only smart thing I have ever seen Donald Trump do since he became President of the United States. He is playing the long game, and it’s a smart move for him, for his horrible, disgusting face. Because here’s what’s going to happen. He halts construction of the border wall right now, saying, “We don’t want it to interfere with the midterms.” He understands the Democrats are going to take back the House of Representatives in the midterms most likely. Still a chance it may not happen, very small chance. So Democrats take back over, for the next two years refuse to fund his border wall. So when it comes time to campaign for the 2020 election, Donald Trump then gets the clearance to go out there to his horrible base and tell them, “We were going just fine with the border wall until the Democrats took over. They killed the project. Nothing’s being built anymore. We have all these horrible deplorables coming in. They’re killing us, they’re raping us, and it’s all because the Democrats wouldn’t give me the funding for the wall.”

I don’t think Trump is smart enough to come up with that plan himself, but I think whoever advised him on this actually earned their money that day. But that is one hundred percent what this man is trying to do right now. He doesn’t care about hurting Republicans in the midterms. He never has. If he did, he wouldn’t be ripping children away from their parents when they cross the border, but he has been getting good advice for once, and he’s trying to play the long game. Setting it up for a 2020 campaign to show that Democrats are weak on immigration just because we don’t want to build a stupid wall.

It’s a smart play by Republicans, it will work to drum up their base, but on the broader scale, the big picture, it will do nothing to motivate moderate Republicans, Independents, and of course centrist Democrats. Those groups have pretty much all agreed, “We don’t want or really need the wall.” The only people it’s going to drum up and cause a fervor with are the far right, alt-right types who show up at rallies with tiki torches and khaki pants. Those are the people who want the wall, and Donald Trump is trying to throw them a bone in the future by pinning all his faults on the Democrats.