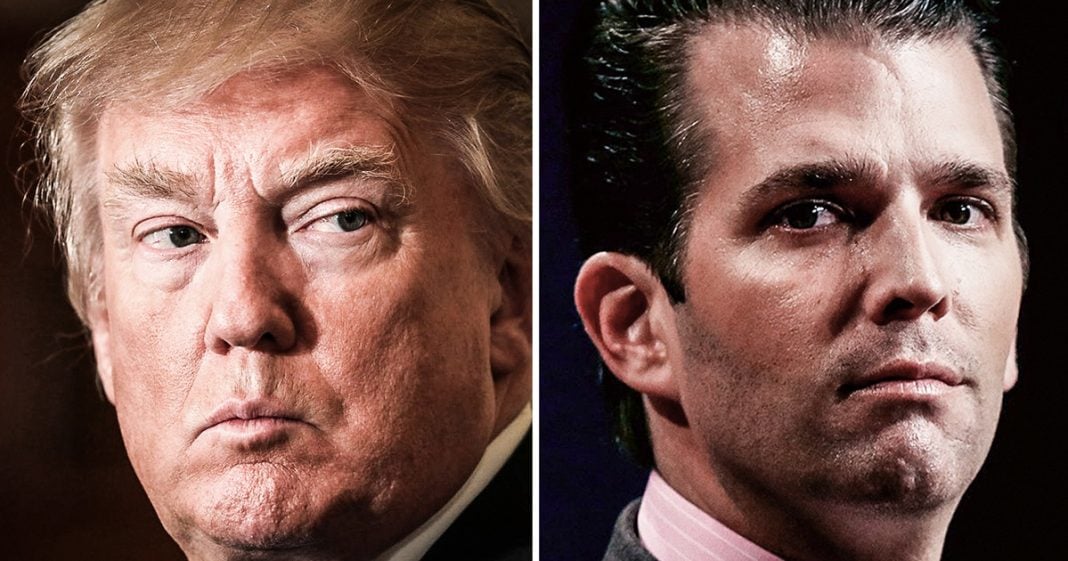 Donald Trump endorsed Republican candidate Foster Freiss from Wyoming this week, and immediately after Freiss lost his primary, Trump tried to throw his own son under the bus so that he didn’t look like a loser himself. Trump told reporters that Don Jr. asked him to do it, but that it was already too late so he shouldn’t take a hit for that. Ring of Fire’s Farron Cousins discusses this.

This past week, the state of Wyoming had their primaries, and one of those races was to see who was going to represent the state as the Republican candidate for governor. One of the candidates in that primary happened to be Foster Friess: big time Republican donor, good friend of Donald Trump, Jr., and a guy who got an endorsement from Donald Trump himself. Well, in case you weren’t paying attention, Foster Friess lost that primary, did not win even with Donald Trump’s endorsement.

What did Donald Trump do? He didn’t go out there and say, “Ah, you know what? I lost one. Hey, it happens to everybody. Oh well.” No, his disgusting ego prevented him from being able to say that he made a mistake. Instead, he threw his own son, Donald Jr., under the bus just so that he didn’t have to look like he got something wrong.

Here’s the exact quote that Donald Trump told reporters this week: “I was asked to do that by my son Don, and I did it, but I did it. I was asked the morning of, and by the time I did it, I guess almost 70% of the vote was already cast. I don’t consider that to be maybe I’ll take a quarter of a loss on that one, but I think it’s 48 and a quarter. It’s 48 to 1, which is pretty good. Right? Pretty good.”

Reading quotes from that man is absolutely painful. He cannot string a sentence together without going on some kind of weird tangent or repeating himself. It’s absolutely insanity, but that’s because this man’s mind is not firing on all cylinders. I don’t even know if it’s firing on one cylinder at this point.

Nonetheless, the big takeaway, right? He throws his son under the bus. He says, “I wasn’t gonna do it, but Donny came up and said, ‘Papa, can you please?’ And so I did it, and they lost, but I wouldn’t have done it had it not been for this dumbass walking up and asking me to do it.”

Now the reason I’m telling this story is because a lot of people have been speculating that Donald Trump will likely resign the presidency in order to protect his children from these investigations. To that I say that’ll never happen. Donald Trump doesn’t care about his children. You’re assuming he’s a normal person that would do whatever it takes to protect his kids, but here, on an issue that literally doesn’t even matter, he still threw his own son under the bus because he can’t handle being proven wrong.

By the way, his record is not 48 to 1. Donald Trump has endorsed losing candidates for the last 18 months, but he can’t admit that, and he would rather everybody think that his own son is an idiot than have to admit that he endorsed a losing candidate.