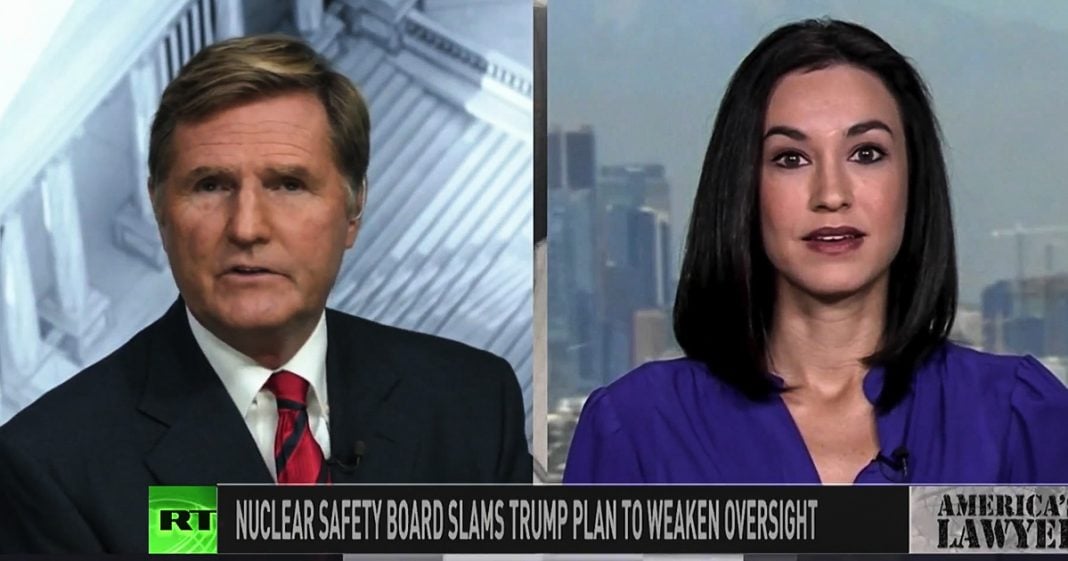 Via America’s Lawyer: Mike Papantonio is joined by RT Correspondent Brigida Santos to talk about a government safety organization tasked with protecting workers and preventing radioactive disasters that is under siege in Washington.

Mike Papantonio: The Trump administration is defending an order that could be used to withhold information about nuclear facilities and hide that information fro the nuclear safety board. Some law makers are calling the move a step to weaken oversight on the nuclear industry. Joining me to talk about this is Brigida Santos. Brigida, the Trump administration is quietly taking steps that are going to inhibit independent oversight. Really, to me, I don’t how you can get around it. It’s a high risk problem, because we’re talking about nuclear facilities. What your take on this story?

Brigida Santos: These new rules will significantly reduce the authority of the Defense Nuclear Facility Safety Board, which has acted as an independent watch dog on the industry since the late 1980s. The board’s role is to assess the safety of US nuclear weapons facilities and make recommendations for improvements based on near accidents and confirmed incidents. These new rules aim to limit the board’s access to information, cut the number of nuclear weapons related facilities that can make recommendations on by 71%, take away it’s authority to oversee protections for 39,000 nuclear workers, and prevent board members from speaking to laboratory staff without direct permission from the Department of Energy.

Now, these orders were first published in May, but the first of three hearings was held on August 28th, last week. Now, until now, Congress and the public have not been given a chance to comment on this, and they were not made aware that these changes were coming down the pipeline. In fact, the only people that were alerted to these changes were the contractors, the private contractors, that are overseeing and operating these nuclear facilities.

Mike Papantonio: Brigida, member of the Defense Nuclear Facilities Safety Board, both Democrats and Republicans, have been united in their criticism of the Energy Department’s order, understandably. All you have to do is look at the meltdowns that have taken place across the world. Chernobyl, now we’re feeling the affect of Chernobyl in the US. The truth is, you can’t safely do this if there’s anybody that’s kept in the dark. This has to be something where people, at every level, know about potential problems. Here, this is just the opposite of that. What is your take on that?

Brigida Santos: This is absolutely the opposite of that, and it is a bipartisan effort. Board members on both sides of the aisle, Democrat and Republican, are saying that getting rid of oversight is incredibly dangerous for public safety, for the environment, and for the safety of the workers in those nuclear facilities. They want to suspend this rule and at least give the public and Congress the appropriate time to comment and weigh-in on whether this should move forward or not.

Mike Papantonio: This has really been the MO of this administration and, to some degree, last administration, where we don’t really have public meetings anymore. We don’t really tell everybody what’s going one. We kind of do it on Friday night when nobody’s paying attention. This is one of those situations. Fortunately, with bipartisan support, we may not have that problem. The industry, though, is calling the Nuclear Safety Board is an excessive regulation, that it’s somehow inhibiting innovation. It’s inhibiting progress in the nuclear industry. We hear this every time. Every time we want to shortcut regulations, there is, “Ah gee, we’re losing money. We’re not progressing. It’s because of these bureaucrats are making us follow some rules.” When was this five member board formed, and what reasons was the board formed to begin with?

Mike Papantonio: Is the order consistent with the Atomic Energy Act? I’ve got about a little less than a minute. What is your take? Is there consistency here?

Brigida Santos: The board members say that it is not consistent at all with the act.

Mike Papantonio: Thank you for joining me, Brigida.