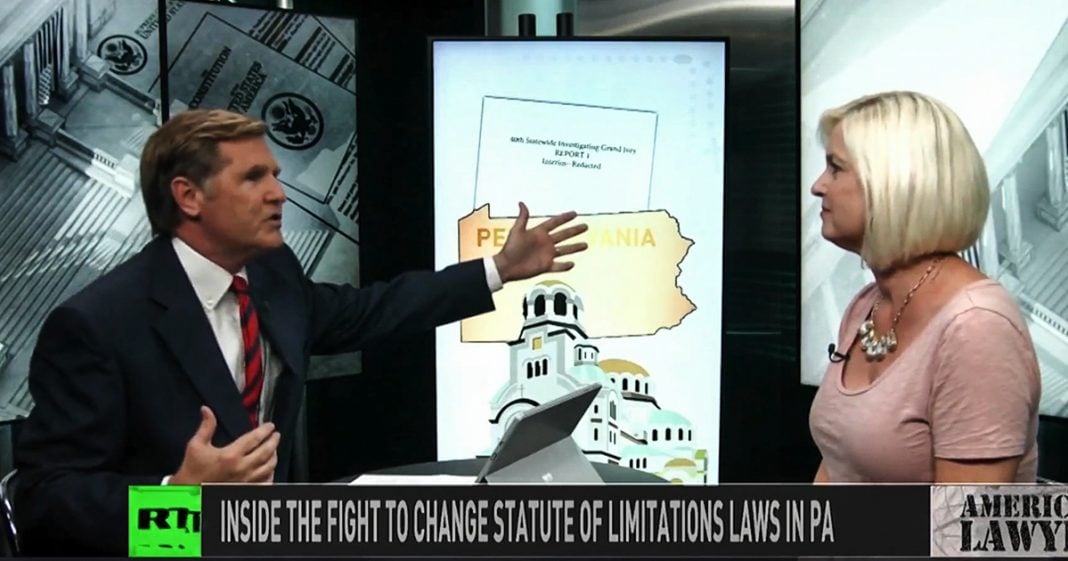 Via America’s Lawyer: Mollye Barrows joins Mike Papantonio to discuss the fight to change statute of limitation laws in PA to protect the innocent.

Mike Papantonio: Three words that separate the thousands of Pennsylvanians who say they were molested as children by Roman Catholic priests, from receiving both justice and compensation for their suffering, those three words are statute of limitation. That’s the reason why just two of the 301 priests named in the grand jury report on abuse and children by priests have been charged with crimes. Joining me to talk about this is Mollye Barrows, legal journalist for Trial Lawyer Magazine. Molly, kids, and Catholics. I mean, same story, we’ve done this story but every week we’re finding some new edge to it. What is your take on this issue? Statute of limitations, they have things they can do, legislation can take care of this.

Mollye Barrows: To me that’s what this is really about because it just keeps coming up of we talked about before, the Catholic Church is continued to get a barrage of criticism whether it’s in United States, this latest grand jury report in Pennsylvania, even in Ireland apparently ground zero for a lot of these claims of abuse, going back for decades. Basically what’s going on in Pennsylvania is they’ve got recommendations for the grand jury that spent two years looking in to this saying, hey, if we really want to do right by these victims, find justice for them then we need to make some real changes to our law. And that includes changing the statute of limitations. It also means not having these victims sign non-disclosure agreements that keep them from being able to report this and work with law enforcement. I feel like we’re saying now, is this is the time that they could make some real changes that would help these victims and they’re not. They’re still making it political.

Mike Papantonio: Molly, you’ve been a reporter many years. You’ve covered a lot of stories on this very topic. One thing that seems so apparent, we’re seeing it with the pope. Don’t say anything. Don’t comment on it. Because what we’ve seen historically is these kinds of these take place and then the Catholic Church says as little as possible and sure enough, the media that is so … you know, if it’s not as shiny thing the media doesn’t have the attention span of a fly. They can’t pay attention to it for more than a little bit of time. So the Catholic Church has used that as part of their playbook, haven’t they?

Mike Papantonio: You see that happening here. What’s you take as far as what your experience covering these stories. You’ve covered many of them.

Mollye Barrows: Yes, and it’s exact same things you see time and time again. The system, whether it’s apathy of the system or deliberate choices by people within it, whether it’s law enforcement or these priests or people within the community, they had different allegiances and agendas and none of them were for the victim. None of them are for doing the right thing. So many of these victims don’t really have a hope of finding any kind of justice because lawmakers in Pennsylvania are really refusing to take up the matter, if you will, or make decisions on statute of limitations. Right now they can only file a civil suit until the age of 30 if you’re abused as a child and file criminal charges all the way up until you’re 50, but these are charges going back decades.

Mike Papantonio: Well, part of this is, and you’ve seen it in the cases that you’ve covered, part of it is cultural. You have the Catholic Church so strong up there they affect local politics, they affect the police department, they affect the media. They affect the whole mindset because they do things like they allowed Catholic schools and the PR machine that they’re bringing out right now is extraordinary. It’s extraordinary. They have more money than 10 third world countries. Their whole goal here is to hang on to that money and they’ve figured out the cheapest way to do it is to avoid … Like, you got state rep, what’s his … Mark Rozzi. Mark Rozzi is saying we need to do something to change the law. Look at the criticism that Rozzi is already under for saying that. He’s getting it from the media. He’s getting it from every source. This is part of the playbook though, isn’t it?

Mollye Barrows: It is. Because this is a democrat. Rozzi, also a sex abuse victim himself by a priest when he was child and he’s under the fire from folks like Senate President Joe Scarnati who is a republican who’s basically saying, “Oh, it’s terrible what happened to these kids. We do need to make some changes, but it sure shouldn’t be retroactive,” and that’s what folks like Rozzi are pushing for and including the governor as well, of Pennsylvania. He’s saying at the very least we need to raise the statute of limitations to be proactive, create a window that’s two year, gives two years for these older victims to come forward and file civil suits so that they can receive some kind of justice. Rozzi also brings up another important point and this is what I think so many victims don’t feel like they really getting justice, is he’s saying this is a public safety issue. Not just statute of limitations like, oh, gosh, golly, I can’t point the finger at my accuser anymore or go after them for some cash. They can’t catch these people who are still doing this. There’s no cure for pedophilia.

Mollye Barrows: And they’re not.

Mike Papantonio: But the truth is the Catholic Church has such control. Go to Boston, they run Boston. Go to parts of Pennsylvania, they run parts of Pennsylvania. Any time you have that Catholic stronghold where they’re in control of politics, they’re in control of culture, they’re in control of the media, this playbook that we’re talking about is so classic. There’s not one thing, there’s nothing at this point that prevents them from going ahead and making some charges, even if the charges, even if there’s problems with the charges down the road, the story can be told and something can be done about this.

Mollye Barrows: They could also improve their image with people around the world and bring justice to these victims of pedophiles and put a stop to them and put them in prison.

Mike Papantonio: Yeah, I mean, if you think about it, you talked about Ireland. Even in Ireland … how do you get any more Catholic than that? Finally, the people are taking to the streets saying, “Enough. Mr. Pope, you need to be heard on this. You need to say something. You can’t just start talking about garbage in the ocean.” Can you imagine … Now, that’s a problem, don’t get me wrong-

Mollye Barrows: But it’s offensive and your problem is huge.

Mike Papantonio: The bottom feeder freaks that seem to overwhelm the Catholic Church at this point. Until we get somebody who’s much more aggressive and is willing to say, you know, here they are, we’re not going to defend ’em anymore, justice system, do what you need to do with these folks because we’re done with it. We’re tired of protecting.

Mollye Barrows: And people should be done with it. You’re right Pap. We’ll follow it, see if they actually make any real decisions.

Mike Papantonio: Mollye, thank you for joining me.