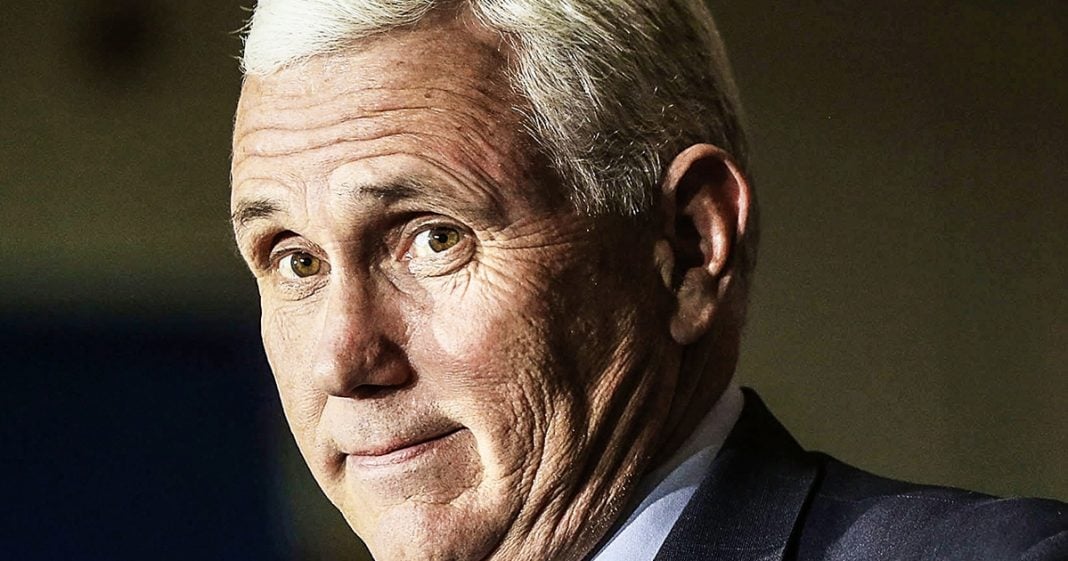 Last week, Vice President Mike Pence admitted that Republicans are going to attempt to repeal the Affordable Care Act (Obamacare) again if they can retain strong numbers in this year’s midterm elections. Meanwhile, vulnerable Republicans are actually deleting their pledges to repeal Obamacare from their campaign websites because they understand how toxic that issue is. Ring of Fire’s Farron Cousins discusses this.

Last Thursday, Vice President Mike Pence told reporters that if Republicans do not get massacred in this year’s midterms, then they are absolutely going to attempt once again to repeal and replace the Affordable Care Act. Now, Mike Pence made these comments and immediately Democrats jumped on them and began campaigning on them because Democrats unlike idiot Pence understand that most people in this country actually support the Affordable Care Act. After Republicans tried repeatedly last year to repeal it, support for the thing went through the roof, even among Republicans. So running on, hey vote for Republicans so that we can do that thing you didn’t want us to do last year. Probably not the best campaign strategy there, Mr Pence. Further more another report came out this week saying that vulnerable Republicans in this year’s midterms are actually going through their campaign websites and deleting any mention of repealing and replacing Obama care because they know that it’s a losing issue.

Republicans basically blew their shot at creating any kind of health care law because they suck at governing. They suck at writing laws; they don’t know what they’re doing, they didn’t have a plan. They didn’t even let their own members read what was in their original repeal and replace bill, and that is why it died. They couldn’t even get enough member of their own party to support it. They just wanted to take away the crowning achievement of the Obama administration, and they failed spectacularly. Not just with members of their own party and Congress, but with their own voters. What’s happening in the United States right now is that people want better health care, they want cheaper health care. The Affordable Care Act may not give them that, but at least it prevents millions of them from losing their health insurance. And if that’s the best they’ve got right now, that’s what they’re gonna take and they’re gonna hope that it gets better. But they also understand that given year and years and years of Republicans crying and whining about repealing the Affordable Care Act yet still unable to come up with any kind of option to replace it, they know that Republicans are not gonna be the ones that they can trust on the issue of health care.

Further more, what most Americans want right now is medicare for all 70%. 70% of the American public. A majority of Democrats, a majority of Republicans and a majority of everybody else wants medicare for all. Any Republican plan would be pretty much the exact opposite of that. It’s going to kick people off their health insurance, it’s gonna prevent people with preexisting conditions from being able to get affordable health insurance, and it’s going to screw up the entire insurance risk pool and force everyone to pay higher prices. That’s all based on the analyses that came out of the Republican proposals from last year. Everybody loses, including the insurance companies. There are no winners, except a Republican party that gets to say that Obama care is dead. Unfortunately for them, nobody wants to hear that phrase, except maybe Mike Pence and Donald Trump. Good luck campaigning on that because even members of your own party don’t want to mention repeal and replace ever again.