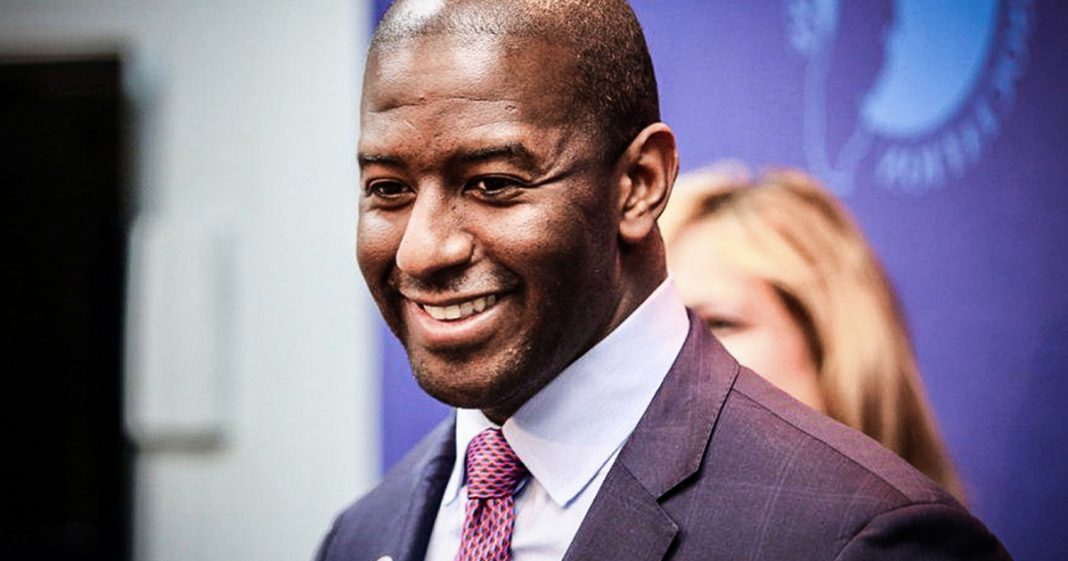 Florida’s Democratic candidate for governor Andrew Gillum is going to push a progressive agenda in his campaign, and just a few days after securing the nomination during the primary he made it clear that he wants to see higher tax rates on corporations and the wealthy elite in order to pay for a Medicare-for-all health insurance plan. This kind of plan is supported by a majority of the public, and Gillum’s message may resonate well with struggling voters in Florida, as Ring of Fire’s Farron Cousins explains.

Florida’s Democratic Gubernatorial Candidate Andrew Gillum is absolutely hitting the ground running after winning his Democratic primary a week ago. And what he’s doing is going out there and spreading a hugely progressive message. This past Sunday, Gillum went on CNN where he talked about the fact that, yes, we need a Medicare For All system in the United States, but if we can’t get it in the United States than we need it here in the State of Florida. And when pressed on how to pay for it, Gillum had the perfect response. He said, “We’re gonna raise taxes on wealthy corporations. We’re gonna make these corporation who are already paying well below what the actual corporate tax rate is, we’re gonna make them pay their fair share. We’re not gonna take everything from them. Their taxes are still gonna be among the lowest in the country, but we can’t do this cheap date thing with corporations here in the State of Florida.” That is exactly what he said, and that’s what’s happening.

Corporations in this country do like to move around from time to time. When they’re shopping on where to build a new factory they like to pick areas with the lowest tax rates. And often times areas, cities, states, will lower their specific taxes just to attract that new business because usually that new business is also gonna kick in some campaign funds for whoever happens to be running that state. Gillum’s not buying into that. Gillum’s not falling for it. Corporations, if they need to expand, they’re going to expand. They have to, or else they start losing money. And all he’s asking is, what is the number? It would be a 2.25% tax increase up from 5 1/2 to 7.75% on corporate taxes. So, a 2.25% tax increase on corporations. Almost not even noticeable for them, right. 2.25% increase in taxes, and that would help pay for Gillum’s plan for a Medicare For All system here in the State of Florida.

He also admits that, that’s not gonna be enough. He doesn’t want to raise taxes on them too much to drive them out of the state, so the other part of his plan is to reach out to other states, and to insurance companies, and pharmaceutical companies. Get everybody to come together. Have the corporations agree to lower prices a bit to make things more affordable, and have other states come in, and help buy into this program, and fund it as well. And then everybody wins. That’s the thing that I think health insurance companies, or pharmaceutical companies, or hospital corporations don’t quite understand. They think they’re gonna take a hit if they have to lower their prices. But in reality we already have people in this country who aren’t refilling their prescriptions because of the cost.

What happens if all those people, thousands upon thousands of them suddenly do start going and getting their prescriptions because you cut the price in half, and now they can afford it, or now there’s a Medicare For All plan that’s going to afford it for them? You’re gonna make more money, and all you had to do is be slightly less greedy, and then you actually win. But corporations don’t have that kind of foresight. Luckily, people like Andrew Gillum running for governor in the State of Florida absolutely does. And on top of that, Gillum is clearly plugged into the will of the people and understands that 70% of people in this country, Republicans and Democrats alike, support a Medicare For All plan. This is not a radical idea. It’s not a new idea. It is a mainstream idea, and that is what Andrew Gillum is running on.