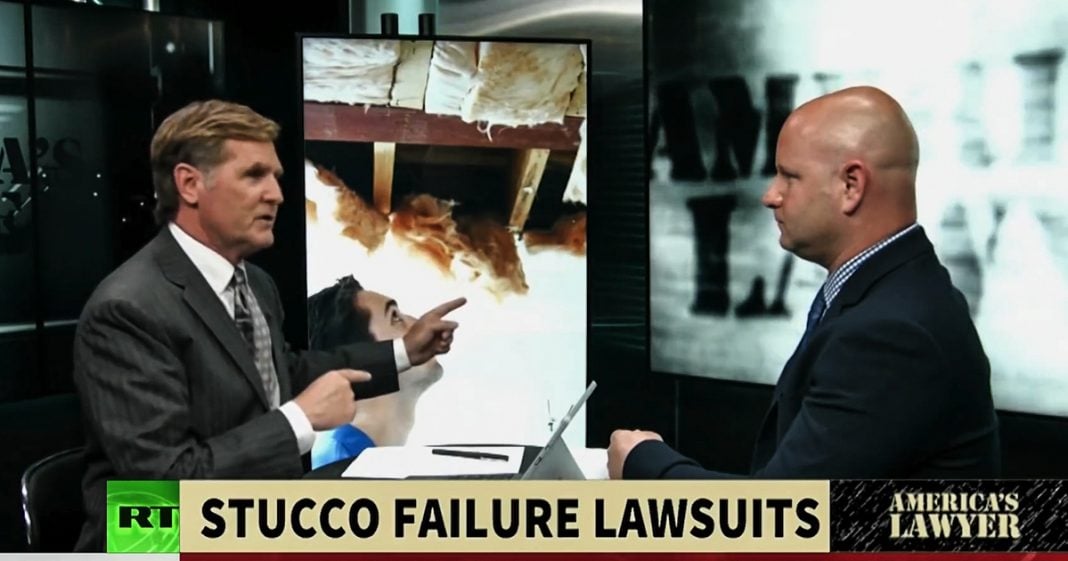 Via America’s Lawyer: Home builders and contractors are ripping off consumers with subpar stucco work, and this is leaving homeowners with thousands of dollars worth of damages to their homes. Mike Papantonio and Farron Cousins discuss.

Mike Papantonio: Home builders and contractors are ripping off consumers with subpar stucco work, and this is leaving homeowners with thousands of dollars worth of damages to their homes. Now, this has been a case that’s been out there a long time. I mean, this case has been … we’ve seen one iteration after another. We see the stucco business, the contractors, the really big producers of this, the big appliers of this saying it’s always the homeowner’s fault. And see, what homeowners do is they say, “Well, I can’t do anything about it ’cause it must be my fault.” That is one of the biggest lies in this industry. It discourages them from going to trial, it discourages them from going to court. The truth is, they will win 85% of the time if they’ll take their case to court. What’s your take on this case?

Farron Cousins: Well another problem, too, is that people don’t even realize if they get this bad stucco on their house, that they should call the contractor back and at least confront them about it. But what’s happening here? We have these home builders … it’s happening a lot in Florida, especially South Florida … doing stucco on the exterior of homes. They’re trying to get as many done each week as they can, so they’re cutting corners. They’re putting it on far too thin below what the regulations require. They’re not putting a lattice framework behind it that it’s supposed to adhere to. They’re applying directly to the outside of the home, which is improper and again, against regulation.

So obviously, as it dries, it shrinks, it begins to crack, these people’s homes are now … basically all the elements can get to it, insects.

Mike Papantonio: Okay, we were-

Farron Cousins: But the real bad part is the moisture damage that leads to serious problems with the home.

Mike Papantonio: You were writing about this story in the National Trial Lawyer Journal a couple years ago, because all of a sudden we start having these homeowners that absolutely can’t even afford to stay in their home. They can’t get a second mortgage ’cause their home is destroyed. The stucco has expanded, it’s got cracks, seepage into the underlying wood. The big problem that they have is mold. Okay? After that begins, the house is destroyed with mold. There’s no safety aspect to this at all.

Mike Papantonio: I mean, if you have black mold in your home, you gotta get out. So then they would go to the bank and they would say, “I need to get it fixed,” and the bank would say, “No, we’re not going to fix it. This is a tear down.” So they got a mortgage out there, they have no home, they can’t rebuild their home, and their only avenue was to go after the stucco builders.

What I saw happening, as I think we talked about before, what we see is we see this industry trying to scare the bejesus out of these people, “You did something wrong. You should’ve put more paint on it. You should’ve filled up the cracks. You did something wrong, homeowners, and if you take us to court, we’re going to bankrupt you in court.” That’s what these builders actually did. We saw that firsthand, didn’t we?

Farron Cousins: Well, yeah, and they go and they argue, and they say, “Did you put the all weather caulk on the cracks? ‘Cause that was your responsibility. We didn’t tell you that, but you should’ve done that anyway. Yeah, you should’ve used the oil based paint because it makes a better sealant on the outside.” They try everything they can to blame it on the homeowner, even though that homeowner did nothing wrong in this instance. The contractors, the home builders, they broke the rules, they did it improperly. They knew they did it because they wanted to get as many done as fast as possible to make a bigger profit, and you’re left holding the bag.

Mike Papantonio: Yeah, interesting thing, it can be done right. If you go to Greece, Greece and Italy, they did this thousands of years ago, the stucco is still there.

Mike Papantonio: It’s exactly the same process, but the builders wanted to save money, so they cut corners, they did it quickly, they did it under a contract trying to make a little extra money, and then left this disaster with the homeowner.