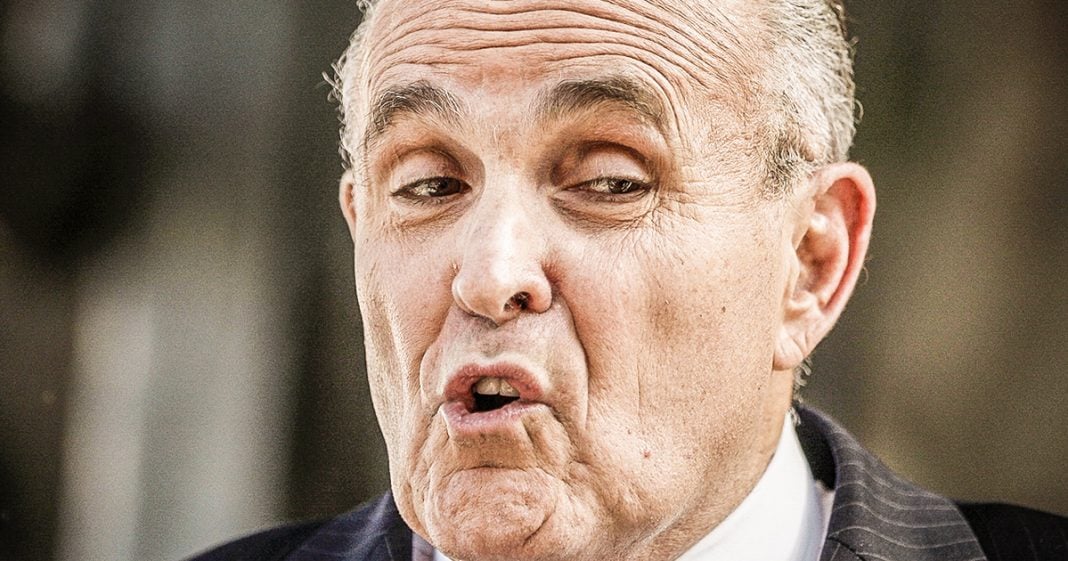 Rudy Giuliani announced this week that Donald Trump will not even answer written questions submitted by Special Prosecutor Robert Mueller if they ask him about obstruction of justice. This is a risky, and stupid, gamble on behalf of Trump’s lawyers, and they are setting the President up for massive failure by trying to trigger a Constitutional crisis. Ring of Fire’s Farron Cousins discusses this.

Donald Trump has the absolute worst lawyers in the United States. And Rudy Giuliani, his lead attorney who is working for free, allegedly, is without a doubt the dumbest and worst attorney ever to pass the bar here in the United States. Giuliani announced on Thursday afternoon that under no circumstances would Donald Trump be answer Robert Mueller’s questions, even if they were in writing, because Trump and Giuliani don’t want to answer any questions about obstruction of justice.

Now rewind the clock a couple months ago, when Giuliani was begging Mueller to let Trump submit written answers to questions. And Mueller said no. Well, this week Mueller caved and he said, okay, fine. We’ll let you submit written answers to questions. And now Giuliani says, no, we’re not even gonna do that. No, sorry. Not gonna happen. Because my client’s such a blistering, blubbering buffoon, that he’s gonna perjure himself or commit even further obstruction of justice somehow. So we’re just not gonna do anything.

What Giuliani is doing right now is actually a calculated move, because he’s trying to trigger a Constitutional crisis, wherein Robert Mueller has to subpoena Donald Trump, something Trump and Giuliani swear can’t happen, although it 100 percent can. Therefore it’s gonna go to the courts. The courts are gonna have to appeal it. It’s gonna go to the U.S. Supreme Court, and Giuliani is counting on the fact that by that time happens, Kavanaugh’s gonna be on the court, gonna have the conservative majority, and they’re gonna rule in Trump’s favor, and end this entire thing.

Giuliani’s playing a long game that’s not going to work. Why? Because you see, these justices on the Supreme Court, even some as conservative as they are, like Gorsuch or Kavanaugh could be, you still have a couple others who, when it comes right down to the U.S. Constitution, they’ve surprised us a couple times. So if you’re thinking that making Mueller go to the Supreme Court in order to issue the President a subpoena’s a good idea, I can go ahead and tell you that you’re going to be shocked when you find out what actually happens. Yeah, Trump can definitely count on Gorsuch and Kavanaugh if he gets appointed, and Thomas. Beyond that, it’s a little bit trickier.

But again, we may not even get to that point. We may have lower courts that all say, hell yeah, you can subpoena the President, and he must comply right now. And, if Kavanaugh doesn’t get confirmed, and there is a vacancy on that court, then a deadlocked Supreme Court gonna rule with the lower courts. And the lower courts in that area tend to be decent.

So Giuliani is playing a very bad long game at this point. But that also misses the point. The point is that Donald Trump can’t talk to Robert Mueller without perjuring himself. That’s not the fault of Mueller. That’s Donald Trump is a horrible human being who is incapable of telling the truth. And I know FOX News Republicans have all talked about, no, if he testifies, it’s a perjury trap. He can’t do that. Why are you worried about a trap being set instead of being worried about the fact that the guy you’re cheerleading for every single day can’t seem to tell the truth. One of those is an actual problem. The other is not.

And I’ll go ahead and give it to you, since you’re not that smart. The trap is not the problem. The problem is that your guy is so dumb and incompetent, that he would absolutely perjure himself because he’s such an idiot. That’s the bigger issue here. Not just that Giuliani says, no, we can’t do that. He’s not gonna answer these questions. Not that he’s trying to basically gamble on Trump’s entire Administration, by hoping that this goes to the Supreme Court, but that the fact is we have a President who cannot even be trusted to tell the truth to federal investigators.

That should tell you everything you need to know about what this investigation is truly about, and which side is telling the truth.