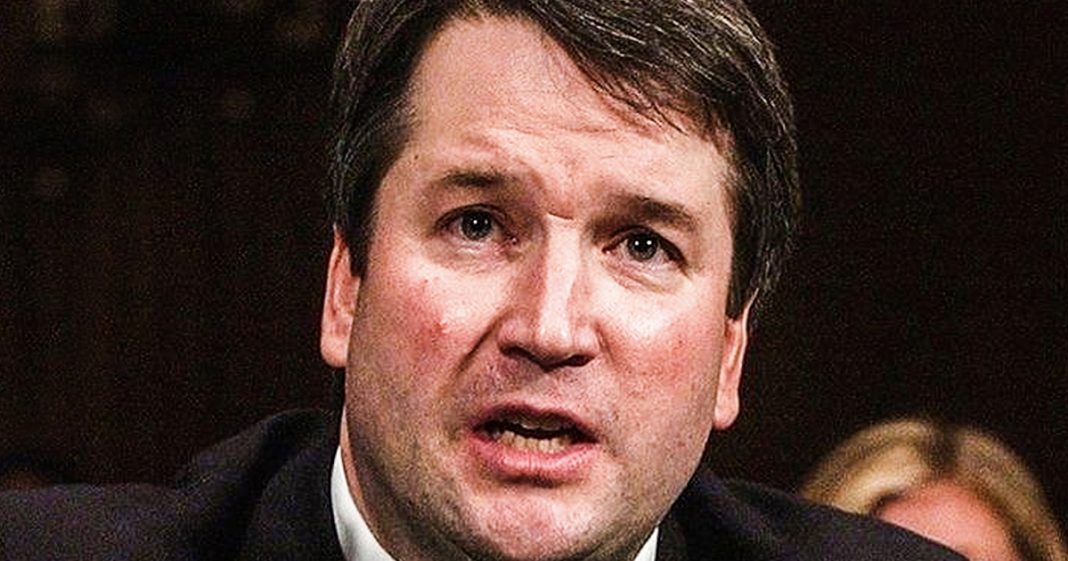 Brett Kavanaugh has had a very bad week with his confirmation hearings with all sorts of unflattering information being revealed, some of which seems to implicate Kavanaugh in illegal activity. But one thing that has been missing is talk of his anti-consumer rulings on everything from protecting clean air to workplace protections, and those are the issues where Kavanaugh could really cause havoc if he gets confirmed. Ring of Fire’s Farron Cousins explains why Kavanaugh must be stopped from getting a lifetime appointment to the Supreme Court.

Brett Kavanaugh, Donald Trump’s nominee to replace Justice Kennedy on the US Supreme Court, has had a really bad week. Basically we’ve found out that this guy may have committed perjury, he may have broken the law with these stolen Democratic Senators emails, and we also know that he likes to press women, but doesn’t think we should do anything to regulate men’s bodies. These hearings have been phenomenal. I am very proud of how the Democratic party has handled themselves. Kamala Harris, Cory Booker, Patrick Leahy, they have emerged as the heroes in these hearings, Booker going as far as to risk his job to release documents showing that Kavanaugh may have actually committed perjury.

Nonetheless, one thing has been missing, and it’s one thing that is just as important as everything else they’ve been talking about. And that is the fact that Brett Kavanaugh is 100% a corrupt corporatist that could screw over consumers at the US Supreme Court for decades. Alliance for Justice, in a recent piece for Common Dreams, they are quoted. Here’s what they have to say about Brett Kavanaugh’s record for consumers and consumer protection here in the United States. “Kavanaugh has repeatedly ruled against efforts to combat climate change and the regulation of greenhouse gasses. He also repeatedly ruled against protections for clean air. He has fought consumer protections in the areas of automobile safety, financial services, and a free and open internet. Kavanaugh has also repeatedly ruled against workers, workplace protections, and safety regulations.”

That’s what we’re looking at with Kavanaugh here. And I know a lot of the discussions have focused on how bad Kavanaugh will be for civil rights, for women’s rights, LGBTQ issues and all of that, and that is true and that is a major factor. But we also have to understand that it’s not just certain groups Kavanaugh is gonna go after. He’s gonna go after literally anyone, regardless of age, gender, religion, sexuality, he’s gonna go after anyone off those people if they’re not a member of the top one percent of income earners here in the United States. That’s what Brett Kavanaugh is. He is a disgusting corporatist who will make sure that corporations can get away with anything in this country, whether they’re killing us with opioids and lying about how addictive they are, whether they’re killing us with their weedkillers and lying about how toxic those are, or the toxins they dump into rivers and streams and our aquifers, or the emissions that they’re spewing out into the atmosphere.

Those are Kavanaugh’s people. And in his eyes, those are the good people. The bad people, the ones that need to just get a life, are the ones who’ve been poisoned by those corporations, the ones who’ve had family members die at the hands of these corporations. Those are the people that Brett Kavanaugh has fought against every single day while serving as a judge in the United States. And if you think that that sounds like somebody that we need to send to the Supreme Court for the rest of their life, then I suggest you take a look and you reread the Constitution and talk about how … and see how many times it talks about protections for people versus protections for corporations. You’re gonna find out pretty quickly that this country was built to protect American citizens, not major corporations, something Brett Kavanaugh doesn’t seem to understand.